This article provides a sense of the evolution of precision agriculture, identifies the more popular technologies employed, and reviews the admittedly scanty evidence as to the on-farm effectiveness of these innovations. The article concludes by discussing key linkages with Big Data.

20 Years (or so) of Precision Agriculture

Farmers and agribusiness managers played a significant role in the development of precision agriculture. For example, in the mid-1990s, a group of agribusiness professionals in Champaign County, Illinois, came together to explore the opportunities associated with two emerging technologies — site-specific agriculture and that strange thing called the Internet. This group, called CCNetAg, was part of an initiative co-sponsored by the local Chamber of Commerce and the National Center for Supercomputing Applications at the University of Illinois. A voluntary enterprise, CCNetAg provided a vehicle for farmers, agribusiness managers, and university researchers to jointly explore adoption of these tools. Figure 1 depicts their expectations of a then future precision agriculture. 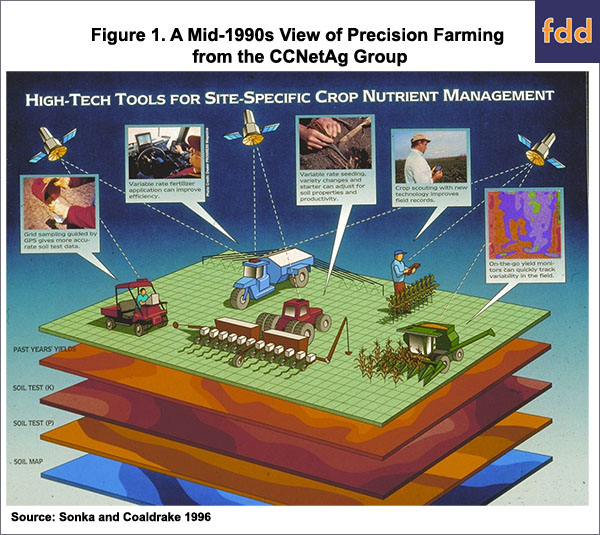 Although created some time ago, the graphic continues to depict key elements of precision farming:

Since 1997, technologies have advanced, although the general categories remain relevant. For example, auto-steer capabilities on farm machinery have become much more prevalent. And active, detailed measurement of the planting process (recording where “skips” occur) is now feasible. Further, the ability to monitor the status of farm machinery as it operates is now paired with electronic communications to signal when machine operations are out of acceptable bounds.

While there have been many publications describing precision agriculture, reports with independent evaluation of the economics of adoption are much less numerous. One means to assess whether there are net benefits of a technology is to monitor its marketplace adoption. For several years the Center for Food and Agricultural Business at Purdue University and CropLife magazine have surveyed agricultural input suppliers regarding the adoption of precision agriculture. Focused primarily on the Midwest and Southern regions, this work is a particularly useful assessment of the technology’s application. From the 2015 report, Figures 2 and 3 provide evidence of adoption for key precision agriculture practices (Erickson and Widmar 2015). 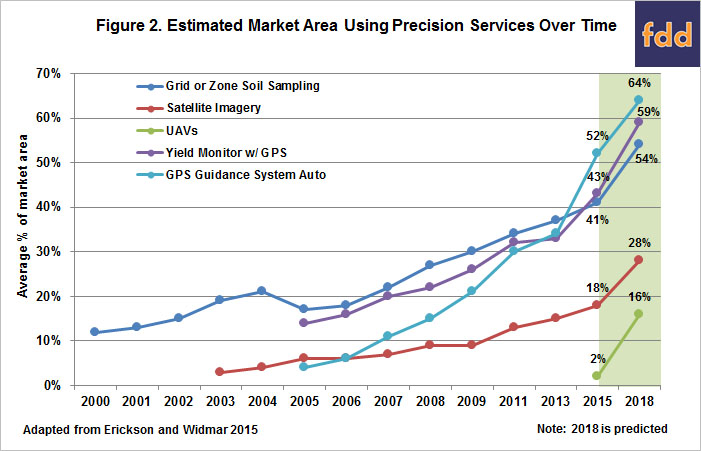 The crop input dealers who provided input for this study are uniquely well positioned to understand and report on adoption of these technologies. Their firms provide inputs (fertilizer, pesticides, and seeds) and services to producers evaluating and adopting precision agriculture.

Early interest in precision agriculture focused on site-specific application of inputs and on use of yield monitors. As shown in Figure 2, grid sampling, a practice associated with site-specific lime and fertilizer application, is currently employed on about 2 out of 5 crop acres. Increased coverage to a majority of acres is expected by 2018. Similar adoption rates (43% and 59%) are noted for GPS-assisted yield monitors. Over the last decade, use of GPS guidance systems has increased rapidly, to a current use estimated to exceed 50%. Continued strong growth to 2018 is expected. The use of satellite imagery and UAVs as tools to support crop production is more recent. Current use affects 18% and 2% of acreages, respectively. Interesting, acreage covered by UAVs is expected to increase eightfold, to 16%, in just three years.

Figure 3 describes a relatively consistent adoption pattern for VRT (variable rate technology) practices. In the early 2000s, adoption was at single digital levels. Since then, steady increases in the extent of acreage covered have occurred. However, the most utilized practice, application of lime, is only now achieving coverage on 41% of the total acreage. These patterns also are interesting because of the very different price regimes that existed for corn and soybeans over these 15 years. When output prices were low prior to 2008, the driver for adoption likely was cost reduction. Possibly, increasing yields was a more significant factor in recent years when prices were higher. 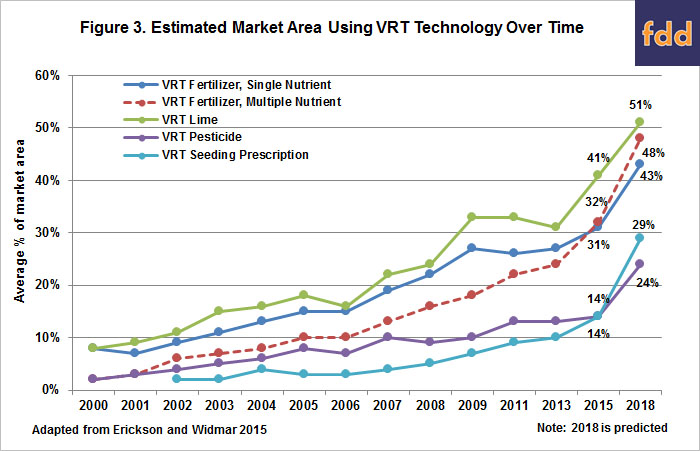 That is not the case. Figure 1 can be used to identify key differences:

Both precision agriculture and Big Data arise from the advent and application of information and communication technologies. They, however, are not synonymous. That said, it is hard to foresee that Big Data approaches will have significant impact without employing the data generated by precision agriculture practices with which we’ve now become familiar.