The average net price received per 100 pounds of milk was $25.19, which was more than total economic costs of $22.35. The price received for milk in 2014 was the highest ever. On a per cow basis, total returns from milk were $5,730 compared to the total cost to produce milk of $5,068 per cow. Total returns from milk per cow were the highest on record. The returns per cow in 2013 were $4,642. Total returns have exceeded total economic costs three out of the last ten years.

Trends in total costs and returns per cow for all herds are given from 2005 to 2014 in Figure 1. The profit margin (return above all cost) increased– from a negative $701 in 2013 to $662 per cow in 2014. The last five-year returns above all costs has averaged a negative $325 per cow. During this period, returns above all costs per cow have varied from a negative $935 in 2012 to $662 in 2014. In Figure 1, labor and interest charges are included in total costs only. Most dairy producers will incur hired labor and cash interest expense and would include them as cash operating costs. 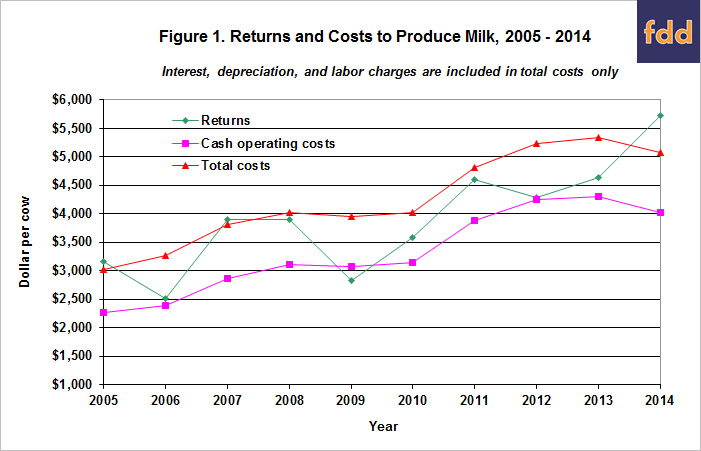 Costs will likely exceed milk prices in 2015 resulting in negative profit margins for dairy producers. Lower milk prices and higher non-feed costs will be the main reasons for the decrease in returns. The average price received for milk in 2014 was 22 percent higher than the average in 2013. The average milk price for 2015 is projected to be about 29 percent less, or about $7.30 per hundredweight lower than the average for 2014. Steady domestic demand and less exports will led to lower prices. United States milk production is expected to increase about 1.1 percent in 2015 due to low feed costs and increased milk production per cow.

A more thorough report can be found at the University of Illinois farmdoc website:
http://www.farmdoc.illinois.edu/manage/enterprise_cost/FBM-0160milkcost.pdf