Each year the USDA’s National Agricultural Statistics Service (NASS) provides estimates of planted acreage of corn and soybeans in the U.S. These estimates provide important fundamental information about potential crop size and have important implications for the price of corn and soybeans. As a result, market participants spend considerable effort in forming expectations about the magnitude of these acreage estimates. In recent years, the USDA’s Farm Service Agency (FSA) has also issued monthly reports of planted acreage to the public beginning in August based on farmer reports received and summarized to date. The usefulness of the FSA acreage data has been the subject of considerable debate. The purpose of this article is to examine the relationship between monthly FSA and final NASS acreage data to determine if and how soon in the cycle that FSA data might be useful in anticipating final NASS acreage estimates for corn and soybeans.

We summarized the progression of USDA/NASS acreage estimates in the farmdoc daily article on October 15, 2015. Briefly, that progression includes the Prospective Plantings report currently released on the last business day of March, the Acreage report released on the last business day of June, the October Crop Production report, and the Crop Production Annual Summary report released in January after harvest. For soybeans, the estimate of planted acreage is sometimes revised in the September Grain Stocks report released at the end of the marketing year. Such revisions stem from a better accounting of soybean consumption during the previous year provided by the September 1 stocks estimate. In addition to these reports, acreage estimates are occasionally revised in the August Crop Production report. These revisions occur in years of unusual planting delays, such as in 2015, and reflect a re-survey of producers in affected areas that were surveyed for the June Acreage report. Finally, acreage estimates are sometimes revised in subsequent years based on the 5-year Census of Agriculture.

The estimates of planted acreage provided in March, June, and January after harvest are based primarily on acreage data collected in the NASS Agricultural Surveys (as well as area frame sampling in June), as described in the October 15, 2015 farmdoc daily article. NASS does not conduct a special survey for acreage estimates in the October Crop Production report, but like the earlier Crop Production reports in the cycle (August and September) information in the October Agricultural Survey could be used to adjust acreage estimates. In October, however, NASS does use administrative data to complement their acreage survey data. The primary administrative data used in the report are acreage data reported to the USDA’s Farm Service Agency (FSA). As indicated on the FSA website, “Farm Service Agency policy requires that producers participating in several programs submit an annual report regarding all cropland use on their farms.” The FSA now issues monthly reports of planted acreage to the public beginning in August based on farmer reports received and summarized to date. The final report is released in January and, in theory, that data represent a complete census of acreage enrolled in the farm programs administered by the FSA. Since the vast majority of corn and soybean acreage is enrolled in farm programs that require acreage reporting, the data should be highly correlated to total planted acreage of each of those crops as estimated by NASS. Data released in October are typically complete enough to be used by NASS to adjust planted acreage estimates. It should be emphasized that administrative data are used by NASS to supplement sampling data and there are likely statistical limits on the magnitude of changes in estimates made in October. Our conversations with NASS statisticians indicate the changes are typically no more than one standard error from the previous estimate.

Still, these changes can sometimes be large enough to alter production estimates to the point they have a potential market impact. In 2015, for example, the soybean acreage estimate declined by about 1.1 million acres in October. Without a change in the yield estimate, such a change would have lowered the soybean production estimate by just over 50 million bushels, or about 1.3 percent. The market has difficulty anticipating changes in NASS acreage estimates in October since the FSA acreage data are not released to the public until after the October Crop Production report is released. In addition, the final NASS acreage estimate released in January can differ from the October estimate based on a combination of survey data collected in December and final FSA acreage data released in January. 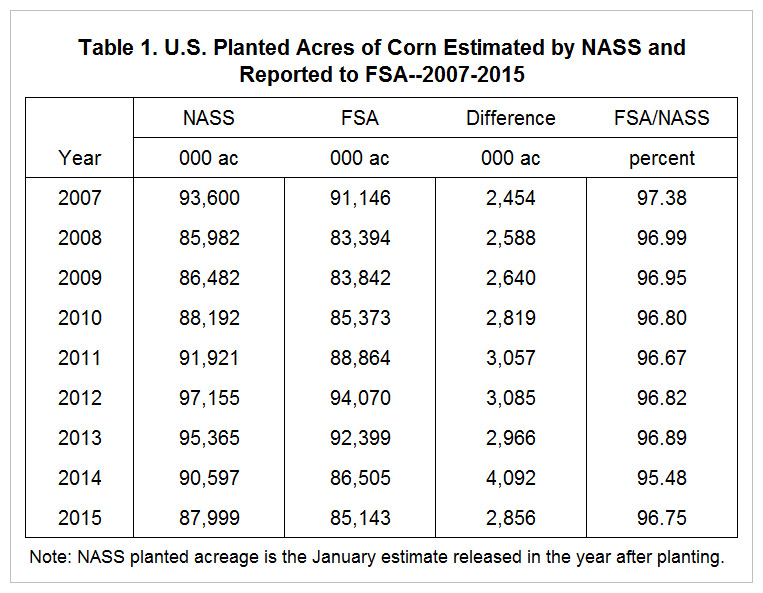 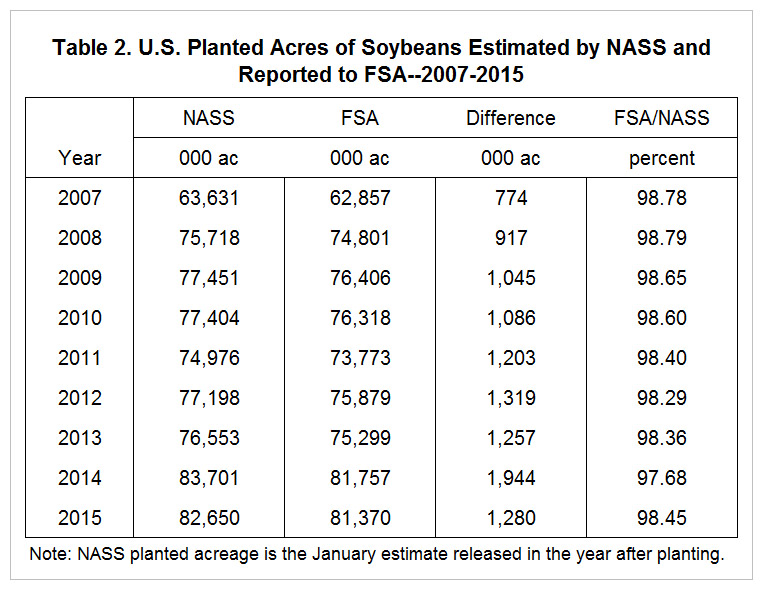 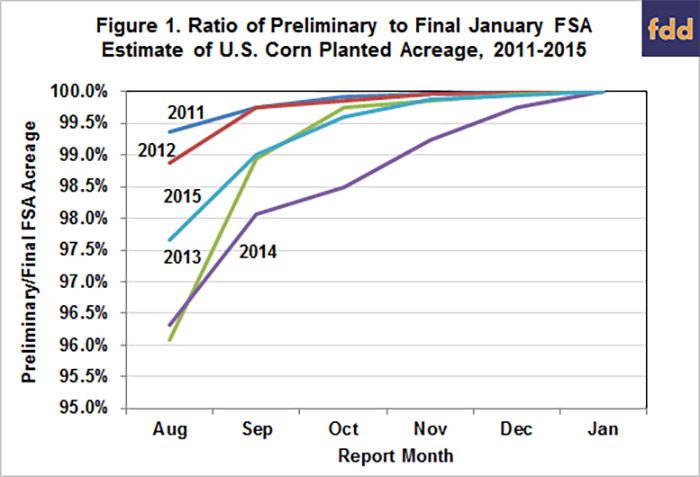 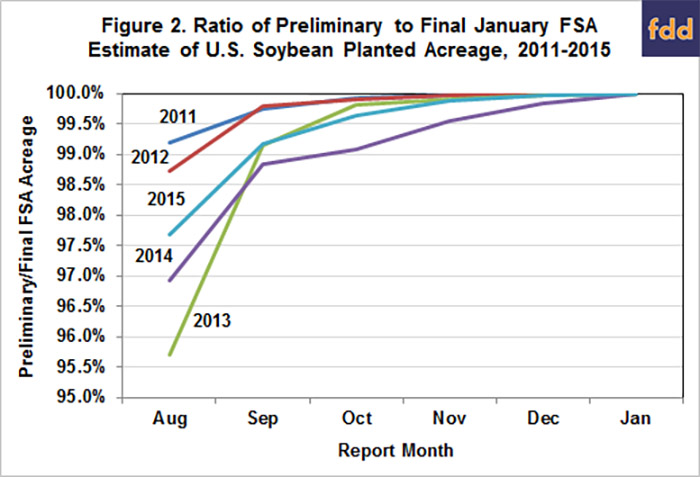 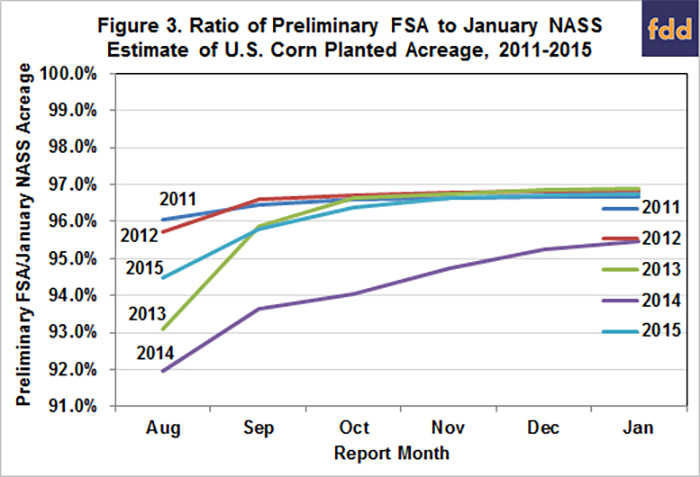 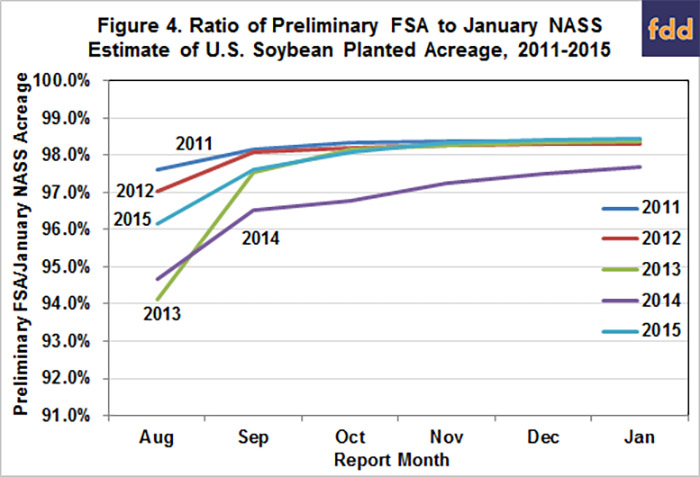 Good, D., and S. Irwin. "Progression of USDA Corn and Soybean Acreage Estimates and Prospects for Final Estimates for 2015." farmdoc daily (5):191, Department of Agricultural and Consumer Economics, University of Illinois at Urbana-Champaign, October 15, 2015.