Financial risk is incurred when a farm borrows money to purchase assets or operate the farm. Financial risk is caused by uncertainty pertaining to interest rates, lending relationships, changes in market value of assets used as collateral, and cash flow used to repay debt. Financial risk is often inter-related with other sources of risk, particularly production and technical, and price and market risk. For instance, when production and/or prices are relatively low, a farm is going to have more difficulty repaying loans and the market value of assets is likely going to soften and perhaps even decline in value.

Managing financial risk is an extremely broad topic. Sub-topics would include managing capital structure (i.e., mix of debt and equity capital), examining the relationship between leverage and risk, using credit reserves, liquidation costs or converting risky assets to cash, using self-liquidating loans, and fixed interest rates. The discussion below focuses on the relationship between leverage and financial risk. 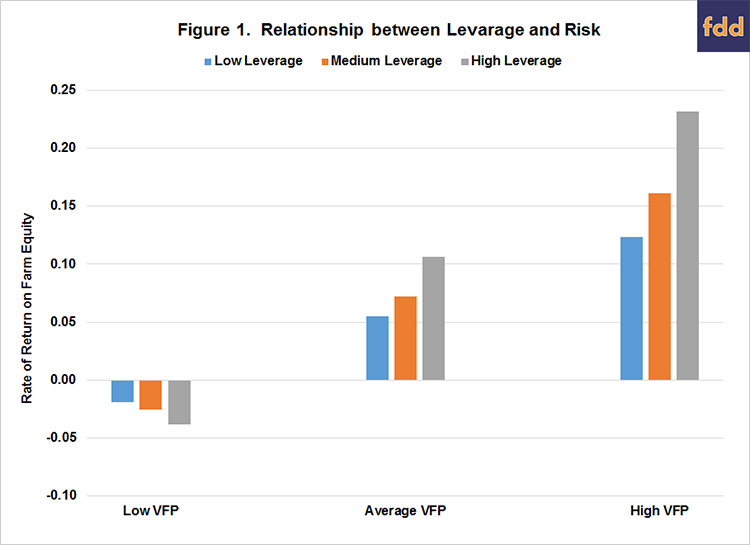 This article described financial risk and illustrated the impact of leverage on financial performance. Leverage was found to increase the variability of the rate of return on farm equity. For the case farm, leverage had a positive impact on the rate of return on farm equity for a high VFP scenario. The impact of leverage was negative for a low VFP scenario. As margins remain tight in production agriculture, it is important for farms to carefully assess their use of debt as well as changes in debt levels resulting from lower asset values and increased difficulty repaying loans.