The outlook for the pork industry has turned somewhat more optimistic in recent weeks. The sources of that optimism include a $2 to $4 increase in spring and summer lean hog futures prices since the first of the year and slightly lower new-crop soybean meal prices. A bit higher hog prices and a little lower cost add to the potential for a profitable year.

Currently, the 2016 pork outlook looks a lot like 2015 which featured losses in the first and fourth quarter with the second and third quarters providing some profit (Figure 1). That pattern appears to be repeating this year. However, the industry is expected to register a four dollar per head profit in 2016 in comparison to an estimated three dollar per head loss last year. 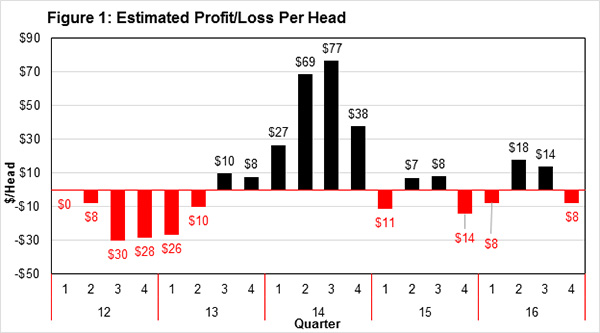 Pork supplies in the first two months of 2016 were down about one percent from the same period a year ago. This is in alignment with the last hog inventory count from USDA. The relative accuracy of the last USDA count adds credibility to using their inventory numbers as a measure of spring and summer supplies.

The estimated cost of farrow-to-finish pork production in calendar 2015 was near $51 per live hundredweight. That is expected to drop a bit in 2016 to average near $50. The decline is related to lower costs for soybean meal. In 2015, high protein soybean meal at Decatur Illinois averaged $341 per ton, but is expected to drop to about $283 for all of 2016. If so, this will be the lowest cost meal since 2007 when it averaged $231 per ton. For corn, the U.S. average price received for calendar 2015 was $3.71 per bushel. Current futures prices suggest that price will be similar for calendar 2016.

These forecasts suggest that the average cost farrow-to-finish pork producer lost about three dollars per head in 2015, a near breakeven year in which producers nearly covered all of their costs including depreciation and all hired and family labor costs. The year of 2016 also appears to be one near breakeven, but with a more positive tone of about four dollars per head of profit above all costs.

As the spring planting season approaches, pork producers are well aware of the uncertainties of the upcoming growing season. Corn and soybean meal prices are at the lowest levels in nine years. Harmful growing season weather in the U.S. would increase feed costs. How could producers help protect against some of these price increases should they occur?

The calls provide potential financial protection if the new-crop futures prices for corn and soybean meal were to rise. They do not eliminate the opportunity to buy corn and meal with even lower futures prices should another high yield year develop. However, one has to pay the option premiums and any transaction costs for these rights.

The more difficult question is “should” pork producers use options to protect against the potential for rising feed prices? That depends upon the risk preferences of each producer, their perception of the risk of harmful weather this summer, their financial situation, and their overall outlook.