Farm profitability can be measuring using earnings before interest, taxes, and amortization (EBITA), net farm income, operating profit margin ratio, rate of return on farm assets, and rate of return on farm equity. EBITA, as the name implies, is used to cover interest, taxes, and amortization, which includes depreciation on machinery and buildings. Net farm income is used for family living, to repay debt, and to purchase new and used assets. Though these two measures are extremely important to monitor over time on a particular farm, due to the fact that these measures depend on farm size, it seldom makes sense to compare EBITA and net farm income with other farms. Because they take into account farm size, the profitability measures other than EBITA and net farm income are more useful when making comparisons among farms. The rates of return on assets and equity are extremely useful when comparing farm investments with other investments. However, these two measures are sensitive to how farms asset are valued on the balance sheet. For this reason, the operating profit margin is more conducive for benchmarking profitability among farms. In this article, a case farm in west central Indiana is used to examine operating profit margin benchmarks.

Table 1 presents the computation of the operating profit margin ratio for a west central Indiana case farm. The case farm has 3000 acres of corn and soybeans. Of the 3000 acres operated by the farm, 2250 acres are cash rented from several landlords and 750 acres are owned. The columns in table 1 compare the 2015 and projected 2016 ratio with the five-year average ratio for the 2010 to 2014 period. Using stoplight terminology, the “green” region for the operating profit margin ratio is 20 percent and above. This benchmark applies to long-run performance, not individual years. Notice that this case farm was in the “green” region during the 2010 to 2014 period. Wet conditions hampered corn yields in 2015. The wet conditions and relatively low crop prices resulted in a negative net farm income and a negative operating profit margin ratio. Trend yields and projected prices were used to develop 2016 revenue projections. Fertilizer costs and cash rent were projected to be lower in 2016. The 2016 profit margin for the case farm is expected to be relatively higher than that achieved in 2015. Unfortunately, expected performance in 2016 is still well below that achieved from 2010 to 2014. 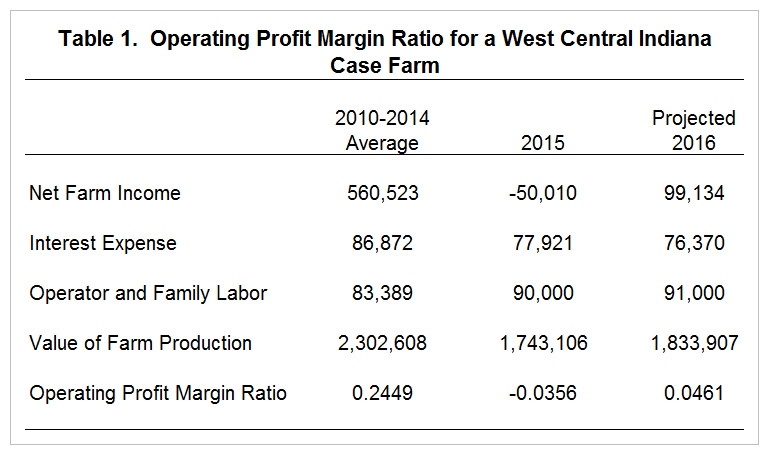