Here we go again! Higher feed prices are once again the main story reducing prospects for profitability in pork production. In the first quarter of 2016, corn prices received by U.S. farmers averaged $3.60 per bushel and high protein meal at Decatur Illinois averaged $276 per ton. Today, those prices are closer to $4.00 per bushel for corn and nearby meal futures are above $400 per ton. Will higher feed prices erase hog profits?

Fortunately, lean hog futures have also received a recent boost due to prospects for additional pork exports to China. In 2014, Chinese pork producers reduced herds due to poor margins. Now there is a shortage of pork, resulting in record high retail prices. China’s pork imports have been growing and China will likely displace Japan as the world’s top pork importer this year. This is no small feat since Japan has been the largest pork importer since 1989.

USDA analysts have forecast total U.S. pork exports to grow by five percent this year to 5.2 billion pounds. However, weekly export data this year points to even larger growth. Total export commitments for 2016 are 17 percent higher than last year at this point. Export commitments include the amount already shipped this year plus undelivered sales. With the prospects for Chinese imports to expand this summer, total export growth may be stronger than the current five percent USDA forecast.

Pork producer margins are currently caught between the good news of potentially higher pork prices from growing exports and the bad news of higher feed prices from reduced South American corn and soybean production and weather concerns for 2016 U.S. crops. Both pork prices and feed prices seemingly are in a period of upward dynamics right now. How these two issues ultimately work out will have a great deal to do with margins for the remainder of 2016 and 2017.

Hog price prospects have improved somewhat. Prices in 2016 are now expected to be near $52 per live hundredweight, compared to an average of about $50 last year. Prices are expected to be in the mid-to-upper $50s in the second and third quarters and then seasonally drop to the higher $40’s in the fourth quarter this year and first quarter of 2017. While hog prices for 2016 are expected to be about $2 higher, the cost of production is also expected to rise by nearly $2 per live hundredweight with current feed price estimates based on futures markets for the rest of the year.

This means that margins will be similar in 2015 and 2016. Small losses of $3 per head are estimated for last year and projections for this year are for losses of $2 per head. These are small losses, so one could characterize the industry as operating near breakeven for both years. Breakeven covers all costs including depreciation, labor cost and an equity return.

The seasonality of hog prices will continue to be an important determinant in the profitability by quarter. Hog prices tend to be the highest in the warm weather months and the lowest in cool weather months. Following this pattern, profits are expected to be $10 per head in the second and third quarter this year and losses of $16 per head are expected in the fourth quarter of 2016 and first quarter of 2017.

Higher feed prices have raised the red flag on expansion. Producers well remember the extreme feed prices experienced in 2008 and again in 2011, 2012, and 2013. That unpleasant memory should help keep expansion plans on hold for now. 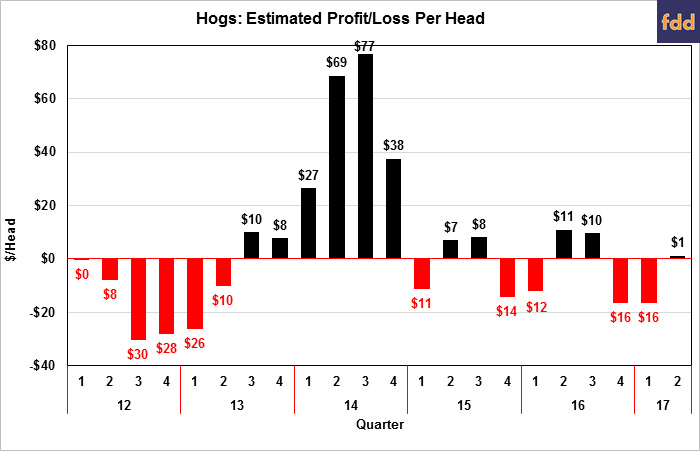