Producers of beef and pork have generally been discouraged about recent low prices as cash prices have dropped sharply this year. Spring finished cattle price highs were near $138 per live hundredweight, but last week had fallen to $115, a $23 plunge.

The story is similar for hogs. After seeing yearly highs at $81 for a national lean price in the third week of June, prices have dropped $20, or 25 percent, in the past two months. Stepping back to take a longer view, finished cattle prices have been dropping since late 2014 when they reached record highs around $173. From $173 to $115 means, finished cattle prices have now dropped 34 percent. It is the same story for hogs, but with even bigger declines. The drop from the $130 record in 2014 to $61 today is a 53 percent reduction.

It is not hard to identify reasons for wild swings in prices over the past 10 years as these industries have been forced to adjust to large economic shocks. The severe multi-year drought in the Southern Plains was one of those shocks for the beef sector. The other was the period of surging feed prices starting in the fall of 2006 and continuing to mid-year 2013.

What is the supply gap? Drought in cattle country and high feed prices caused economic losses that forced supplies downward. As a result, the supply of meats (beef, pork, chicken, and turkey) dropped from 220 pounds per person in 2007 to just 201 pounds by 2014, creating a 19 pound supply gap. Low available supplies in 2014 brought record high prices for cattle, hogs, and chickens. Turkey prices moved even higher in 2015 because of additional lost production due to avian influenza.

The highest animal prices were in 2014 and 2015, at the same time feed prices began to moderate with the large 2013 and 2014 crops. High animal prices and lower feed prices meant record profitability. Record profitability was the signal producers needed to start expansion, and they will likely continue on that path for several more years. Thus, the meat industries are now in the process of filling the supply gap.

In fact, current USDA forecasts for 2017 are that U.S. per capita meat supplies will be back up to 216 pounds. That is a burst of 15 added pounds since the 2014 low of just 201 pounds and just four pounds short of the record consumption in 2007, which was based on the era of $2.00 per bushel corn. 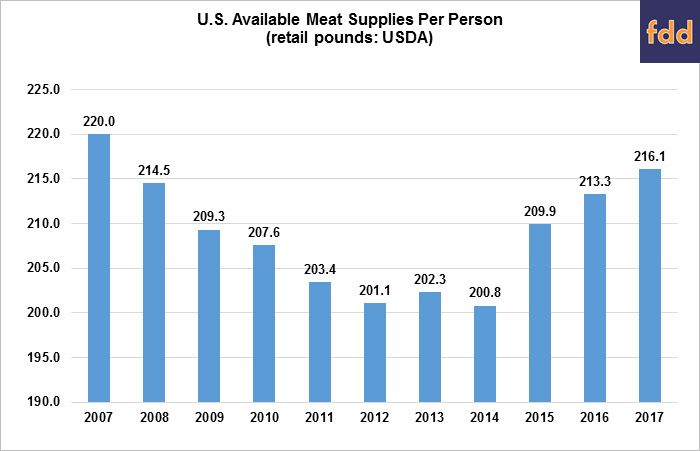 Supply adjustments have been different for the pork and the beef sectors. Reduction in pork consumption per person was four pounds from 2007 to 2014. By 2017, pork will have recovered all of that reduction and be back up to 2007 per capita supplies. Pork will fill its supply gap. The pattern is much different for the beef sector that experienced more trauma and cannot increase production as quickly as poultry and pork. From 2007 to 2014 beef availability dropped by 11 pounds per capita and in 2017 is expected to still be about 10 pounds below 2007 levels. This means beef has only made a small step toward filling the supply gap.

There are some more important implications. First, the beef sector has been retaining females and this means that the size of the calf crops will be increasing over the next two years and per capita beef supplies will likely increase for two to three years. Second, the chicken industry has already filled its supply gap and more as 2017 per capita chicken supplies are expected to be six pounds more than supplies in 2007. Third, it is looking increasingly like the meat and poultry industries will totally fill the supply gap in the next three years with per capita meat and poultry supplies returning near the 2007 record of 220 pounds. However, beef is not likely to reach its 2007 levels, with chicken taking most of that market share.

A critical factor in a continued increase in per capita meat supplies will be moderate feed prices. The potential record 2016 corn and soybean crops suggest that corn, soybean meal, and forage prices over the next 12 months will be some of the lowest of the past decade. This is likely to stimulate somewhat more meat production for 2017 than the USDA forecasts used here.

Why are animal prices moving lower? The big picture answer is that the animal industries are rebuilding per capita supplies because of lower feed prices and restocking brood cows in the Southern Plains. It seems increasingly likely that the meat industry will totally fill the supply gap that was created from 2007 to 2014.

The meat industries are expected to continue to increase supplies until animal product prices drop to levels that approach breakeven levels.