The USDA released their first survey-based estimates for US corn and soybean production earlier today. The August 1 U.S. average corn and soybean yield projections, at 175.1 and 48.9bpa, respectively, were record large and a major surprise to the market. While these are indeed “big” yields in an absolute sense, it is an open question whether these are truly “monster” yields. We provide some perspective on that issue in today’s article.

Figures 1 and 2 show the U.S. average yield of corn and soybeans, respectively, over 1960-2015. A key feature of both yield histories is an upward trend, or “drift,” which is represented by a linear trend (see the farmdoc daily articles on March 2, 2016 and March 9, 2016 for further details). Corn yields have trended up by about 1.8 bushels per year and soybeans about 0.4 bushels. The difference between the trend yield and actual yield is assumed to be the result of weather. The practical implication of a technology-driven upward trend is that absolute yields across time are not really comparable. In order to make comparisons across time on an “apples-to-apples” basis we need to adjust for this upward trend. 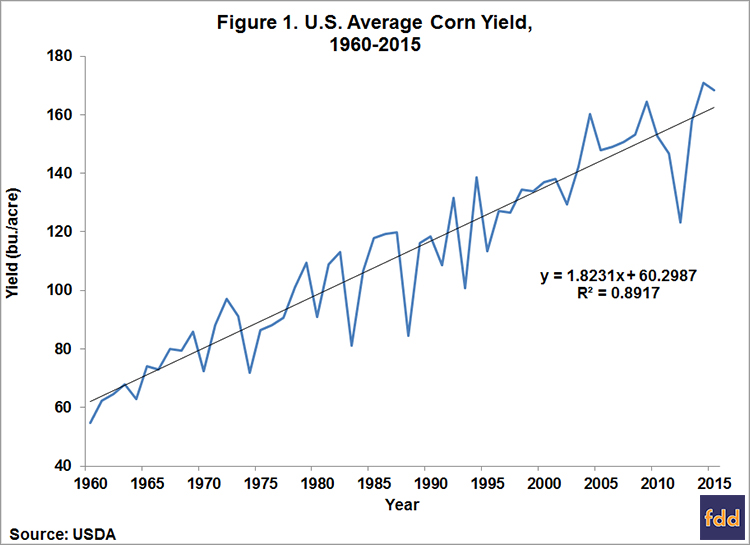 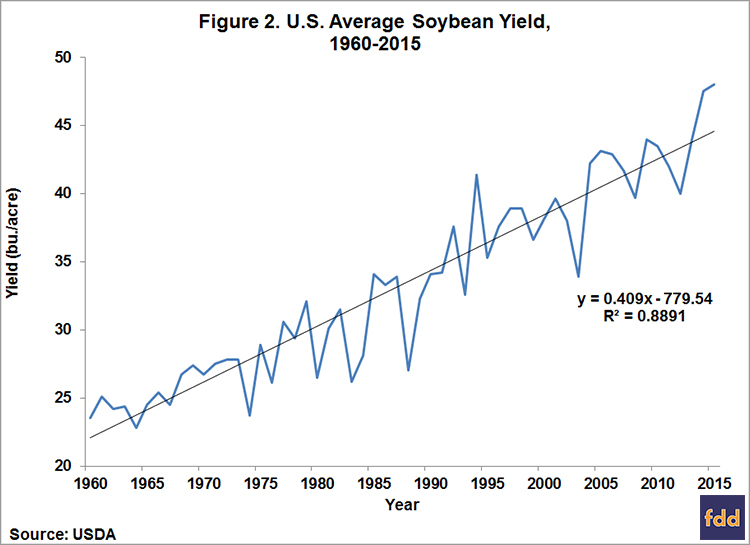 In Figures 3 and 4, we plot a subset of the differences between actual yields each year and the trend lines shown in Figures 1 and 2. Specifically, we plot the 20 largest positive deviations from trend and order them from lowest to highest. We also include the trend deviation for 2016 assuming the USDA August 1 projection is the final yield for this year. For corn, this comparison shows that the August 1 yield projection is 10.9 bushels above trend, but it would only be the 8th highest deviation since 1960. While this would certainly be a very good corn yield by historical standards, it would not even be among the top 5 largest positive trend deviations. For perspective, the highest trend deviation of 18 bushels in 2004 would translate into a yield of 182.2 bushels in 2016. In contrast, the August 1 trend deviation for soybeans would be 3.9 bushels per acre and the second highest on record. It is especially interesting to observe that if the August 1 USDA soybean yield verifies then three of the five highest positive trend deviations for soybeans since 1960 will have occurred in the last three years. Either we have had an extraordinary run of favorable weather for U.S. soybean production in the last three years or soybean technology and management have made a discrete jump, or both. 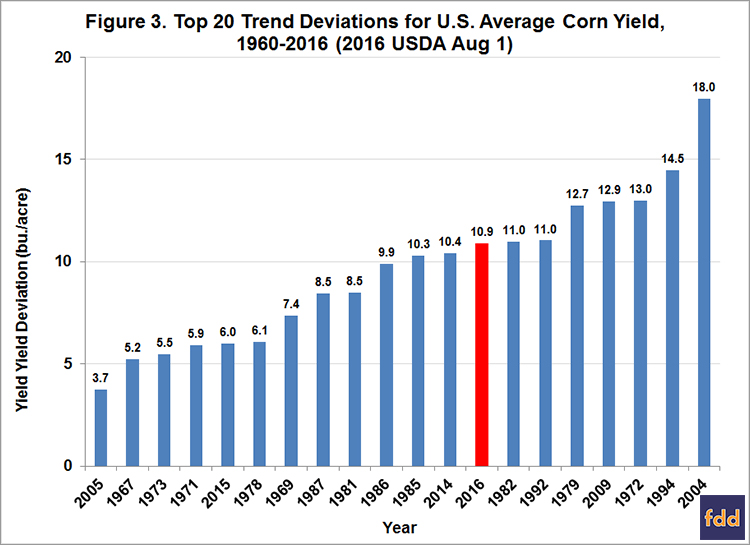 Figures 3 and 4 provide additional perspective when considering where final yields for 2016 might end up. For both corn and soybeans, the USDA August 1 projections imply trend yield deviations for 2016 that are larger than in 2014, about half a bushel in each case. It is debatable whether weather conditions this summer in the Corn Belt have been better than in 2014, which was characterized by ample rainfall and unusually cool temperatures in July and August. The 2016 growing season has had adequate to more than adequate precipitation in most of the Corn Belt (some exceptions), but temperatures near- to above-normal. It will be interesting to see if final yields can be achieved at the level projected by the USDA given this combination of weather conditions.