Transferring business management between generations is one of the most critical steps in transitioning the business from an older generation to a younger generation. Having said that, in numerous instances, this step is given little thought. Transitioning management cannot be done overnight, and often requires a trial and error approach before it can be determined how each generation fits into the multiple generation business. This article briefly describes some of the key factors that need to be considered when transitioning business management from an older generation to a younger generation. The outline of this article roughly follows Hofstrand (2016c). However, this article elaborates on many of the points made by Hofstrand (2016c) and provides additional focus on getting the process started.

In the discussion below, I assume that the two parties can work together and that the business is large enough to support two generations. This means that the older generation is ready to bring in a new generation and begin turning over management, control, ownership, and income; and that the younger generation is committed. For more information on these issues, see Hofstrand (2016a; 2016b).

For a multiple generation business to be successful, the parties need to agree on the future direction of the business. In other words, the parties involved need to share a common vision of their future together in farming. One of the ways to come up with this common vision is to explore the goals and objectives of the relevant parties, which would include the older generation, the younger generation that is planning to return to the farm, and the off-farm heirs. Though often used interchangeably, those that help businesses with their transition plans typically have unique definitions for goals and objectives. Goals are broad and general statements of what an individual wants to achieve. In contrast, objectives are precise and quantifiable measures of how you will achieve your goals. In addition to having an impact on management transfer, goals and objectives impact how business income should be divided between the parties and how property will be divided between the younger generations coming back to the farm and off-farm heirs.

Even before the younger generation returns to the farm, it is imperative that both the younger and the older generations think about what skills the younger generation is bringing to the operation. We often want to hire individuals that are like us. In a small business, hiring someone that is like you or bringing in a family member that has a similar skill set is problematic. For example, if both parties are not particularly fond of keeping and analyzing records and financial statements, this is a problem. In today’s world, to be successful, someone in the business will need to be interested in these tasks. Other areas that are sometimes overlooked are procurement and marketing skills, and personnel management skills. The issue pertaining to the skill sets of the respective parties is important enough that many farms conduct a skill assessment of current and returning family member’s skills, and use this information to choose areas where additional training and professional development are needed.

Management tasks cannot be transferred overnight. Typically, the younger generation is given some responsibility relatively soon after joining the operation. For example, they may be assigned responsibility for a small area or part of the decision making process of an enterprise or function. I have found the following two related questions helpful when determining where to start the management transfer process. First, what specific areas is the new generation passionate about? Second, does this passion for specific areas correspond with areas in which they are skilled or have experience?

Let us give a few examples of how the generation could obtain some management responsibility. With a grain farm, it is relatively easy to have the younger generation rent a tract from the older generation or from one of the farm’s landlords. In this instance, the younger generation typically makes the input decisions regarding the tract. With a livestock farm, the younger generation may be responsible for specific duties pertaining to one of the laying hen, turkey, or swine barns on the farm, or for a pen of cattle. Again, the younger generation would be responsible for making decisions regarding the specific duties identified. When assigning responsibility for a tract of land or specific duties to the younger generation, it is important to think about how mistakes are going to be handled. Everybody makes mistakes and thus should have the opportunity to make mistakes. The important thing is for individuals to learn from their mistakes. It is also important to celebrate successes, in addition to pointing out mistakes. Setting standards for success is important, and having high standards is not necessarily problematic. However, it is important to realize that individuals meet high standards in incremental steps. When we celebrate movements in the right direction, we affirm and validate the efforts of our co-workers. If providing feedback, positive and negative, is difficult for the older generation, which it often can be, just remember how important this feedback can be. Often times when a new family member or employee is added to the business, the current family members and employees find out how important it is to improve communication skills.

Once the younger generation has had a change to manage part of the business, it is time to develop a general structure that can be used to make business decisions. Hofstrand (2016c) discusses two general structures: general manager and equal voice. With the general approach, one party has final authority. At least in the early stages of the new business arrangement between the two generations, this party is typically the older generation. It is important to note that under this approach both parties have responsibilities for major operating decisions and are involved in major decisions. The final authority, however, rests with one party. This approach typically works well during the early stages of the new business arrangement while the younger generation is still garnering valuable management experience. The second approach is to give each party an equal voice in decision-making. This approach often works best during middle or later stages of the two-generation arrangement.

In addition to adapting a method to make business decisions, it is important to think about how daily management responsibilities are divided between the two generations. Again, this occurs after the younger generation has been given a chance to manage part of the business. Dividing management responsibilities between parties often leads to more expedient and better decisions. Obviously, individual interests and skills should be considered when dividing responsibilities. There are two primary methods that can be used to divide responsibilities. The first method divides responsibilities by enterprise. The second method divides responsibilities by function (e.g., finance, marketing, personnel, or production). Under both of these methods, decisions that affect the entire business would need to be made by both parties using the general manager or equal voice approach. It is also common to make joint decisions regarding major asset purchases, regardless whether these assets pertain to just one enterprise or function.

The discussion above makes the management transfer process seem smooth with few hiccups. This is often not the case. Given that this is the case, it is often helpful to use a management transfer worksheet or checklist. Table 1 contains a checklist that can be used to keep track of the transfer of specific duties. This checklist was adapted from Baker (2006). The duties are separated by function. Both short-term and long-term management tasks are included in the table. 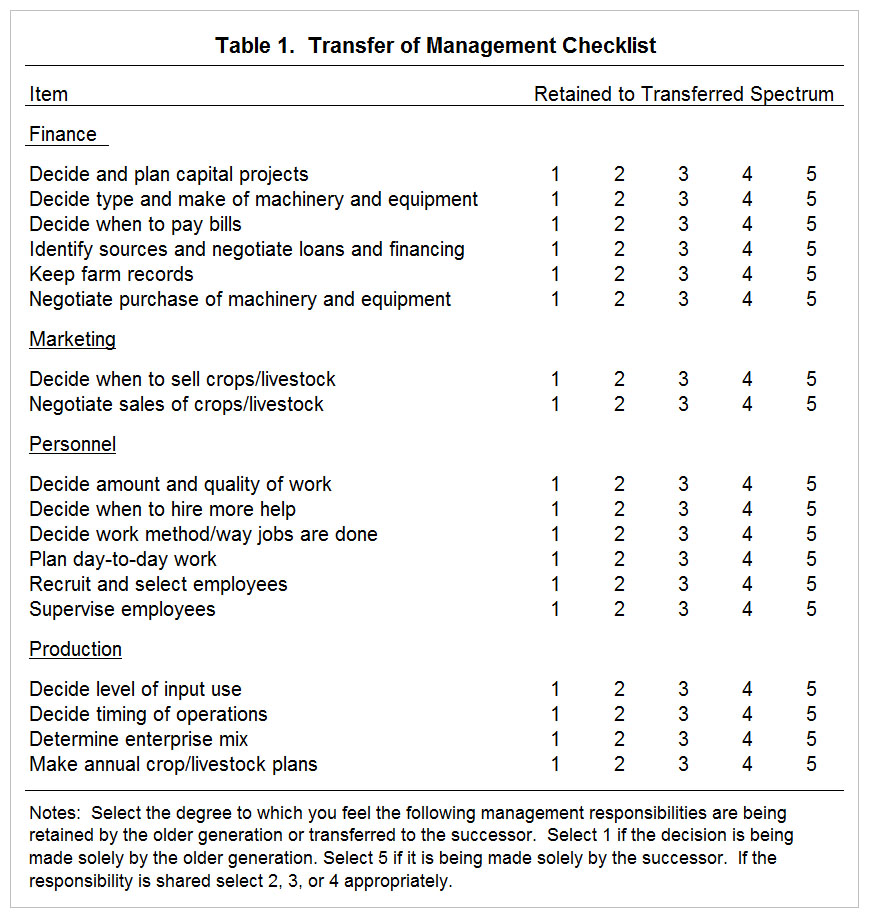 This article briefly described some of the key factors that need to be considered when transitioning business management from an older to a younger generation. After concluding that both generations are committed to adding someone to the operation and determining that there will be sufficient income for both parties; it is imperative to develop a transition plan involving management transfer. This plan needs to address goals and objectives of both parties, the initial management transfer steps, decision-making authority, and division of management responsibility.