Very high U.S average soybean yields that were well above the long-term linear trend values (calculated beginning in 1960) in each of the last three years continues to be somewhat of a puzzle in search of an explanation. One potential explanation for yields being so much higher than the long-term linear trend values is that there has been a shift (higher) in the linear trend in U.S. average yields in recent years. However, we have not yet been able to identify a shift in that trend due to the limited number of observations. A second potential explanation is that yields have actually followed a non-linear rather than a linear trend. In fact, we found in a recent article (farmdoc daily, April 19, 2017) that a quadratic equation does provide a slightly better fit to U.S. average yields from 1960 through 2016 than does a linear equation. That is, yields appear to have actually increased at an increasing rate over the last several years rather than at a constant rate (in bushel terms). Based on the quadratic trend values for the past three years, only 2016 represented an unusually large positive deviation between actual and trend yields. The question, then, is what are the factors that have contributed to a better fit for a non-linear trend to average soybean yields?

In the farmdoc daily article of April 19, 2017 we examined long-term soybean yield trends by state. We concluded that a linear trend is the best fit to actual yields for many states in the U.S. However, a quadratic trend provided a better fit than a linear trend for a number of states. Those states included Nebraska and all states in the Delta and Southeastern portion of the U.S. It appears, then that the non-linear trend for U.S. yields is driven by non-linear trends in selected states. It is interesting to observe that some of the states that have experienced yields rising at an increasing rate in recent years are also states that have a higher proportion of irrigated soybeans. This raises the question of whether yields for irrigated soybeans have exhibited trend yield performance that differs from trend yields for non-irrigated soybeans, which in turn might explain the non-linearity in U.S. yield trends. Here, we examine the long-term yield performance separately for irrigated and non-irrigated soybean production in the U.S. to determine if trends have in fact differed. 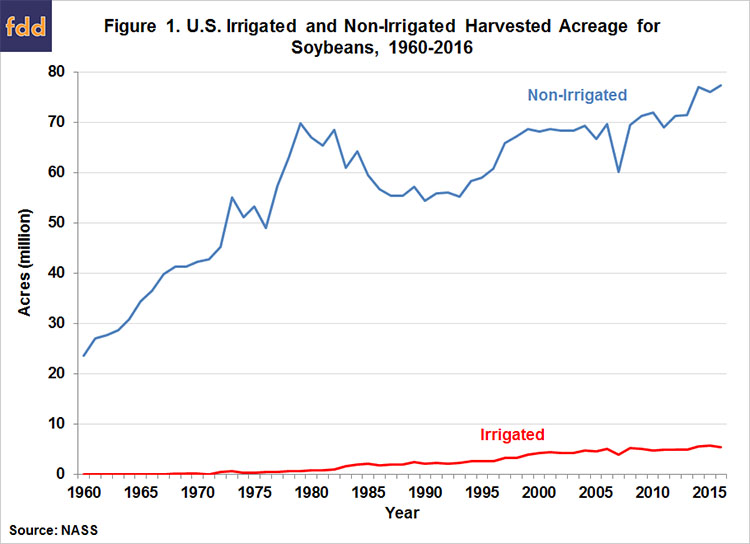 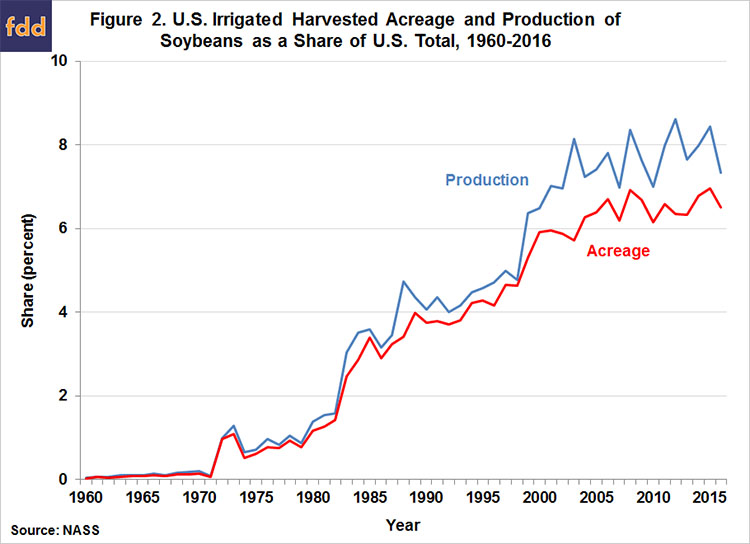 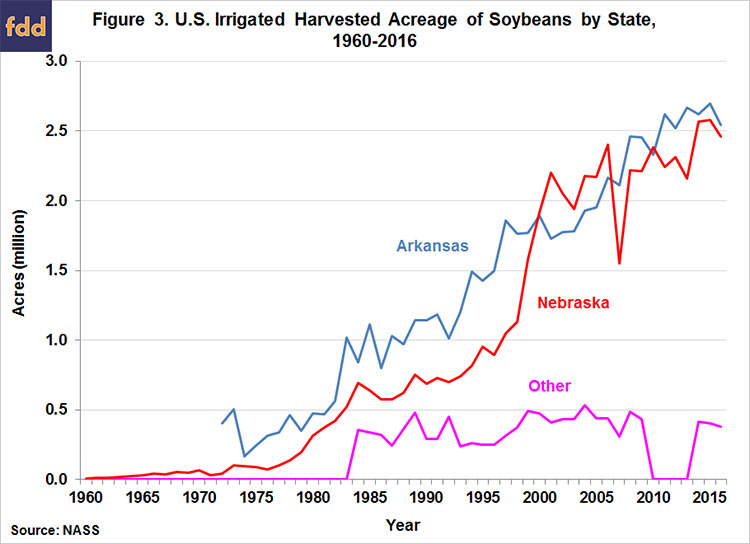 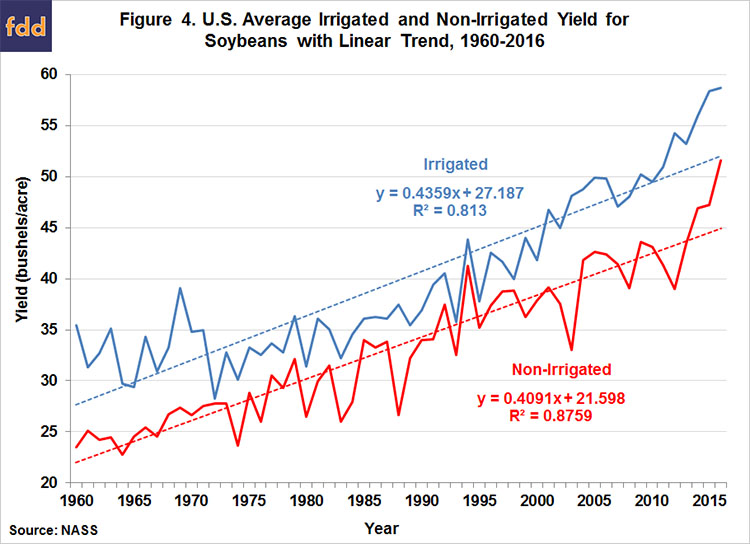 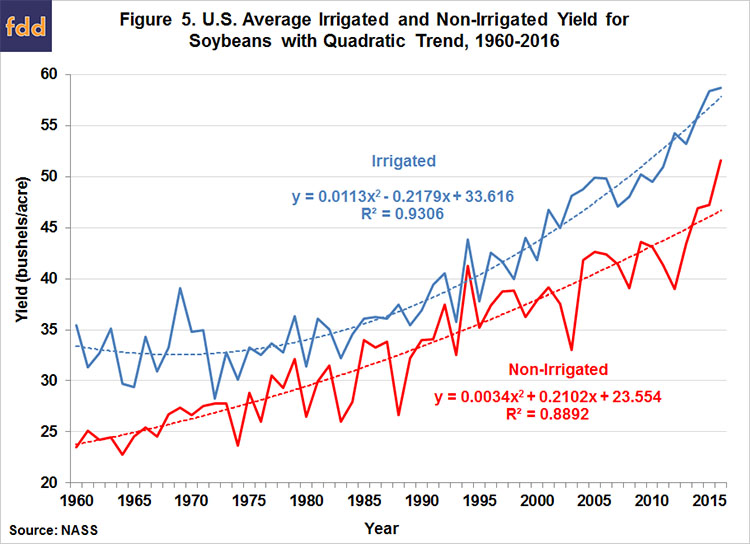 We can conclude from the analysis in Figure 5 that the non-linear growth rate for irrigated soybean yields has contributed to the non-linear growth in average U.S. soybean yields. This is further illustrated in Figure 6, which shows the ratio of average irrigated to non-irrigated yields. This ratio declined steadily from about 1.5 in 1960 to just above 1.0 in 1998, reflecting the gain in non-irrigated soybean yields relative to irrigated yields. Then around 2000 the ratio suddenly increased again and stabilized around an average of 1.21. The ratio has not been below 1.1 since 1999. 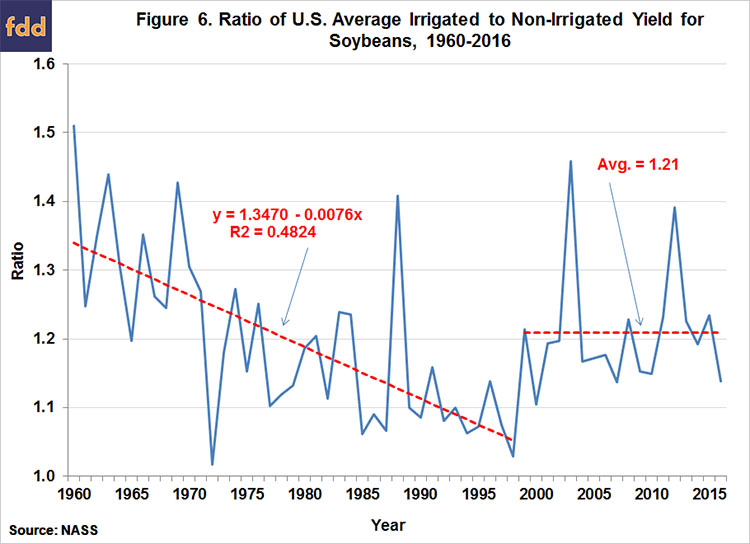 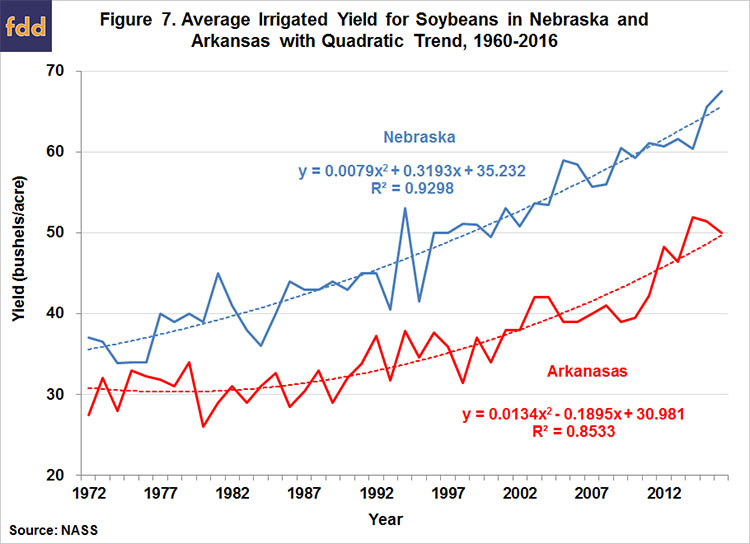 We have historically argued that a linear trend beginning in 1960 provided the best fit to actual U.S. soybean yields and that conclusion appears valid through 2013. The high yields in 2014, 2015, and especially 2016, suggest that yields are actually increasing in a non-linear fashion. A quadratic trend does provide a slightly better fit to actual U.S. average yields since 1960 than does a linear trend. That is, yields appear to be increasing at an increasing rate in recent years. Our previous analysis (farmdoc daily, April 19, 2017) indicated that the non-linearity in U.S. average yields is being driven by yield growth in Nebraska, the Delta, and the Southeast. One possibility is that yield growth in these areas is being driven by yield increases for irrigated production. We find that yields on irrigated production have in fact been increasing at a faster rate than for non-irrigated production. The growth has been especially strong in Arkansas. This means that yields on irrigated acreage are contributing to the non-linear growth in overall U.S. average yields.