USDA’s release of the March Prospective Planting report indicated an increase in planted acreage for soybeans in 2017. At a record high of 89.5 million acres, the report shows approximately 6 million additional acres of soybeans planted above last year and presents a possibility of record production in soybeans in 2017. The expansion of soybean acreage in the Prospective Plantings reports consisted of increases in many areas of the country with record levels of soybean planting intentions in the Western Corn Belt and Plains states. The size of the prospective soybean production in 2017 depends on the average yield for the crop which consists of many factors that will unfold over the next few months. Yield expectations are typically based on trend yield analysis, but recent above-trend yields combined with expanded acreage in lower yielding states raises the possibility of additional yield uncertainty in 2017. To address this issue, we first estimate trend yields for soybeans in states measured by the USDA. We then calculate a national trend yield estimate by weighting each state trend yield estimate by the percentage of acreage in that state in both 2017 and 2016. The difference in the two national trend yield calculation for the two weightings gives an indication of the potential yield impact of the acreage shift in 2017.

U.S. national average soybean yield from 1960-2016 is provided in Figure 1. The figure contains a linear trend indicating yield increases 0.42 bushels per acre a year over the period. The linear trend fit explains 88.6 percent of the variation in annual average yields. Previous discussions of soybean yield expectations can be found in earlier work on forming trend expectations (e.g., farmdoc daily, March 19, 2015; March 9, 2016). Despite the good fit, a noticeable deviation from trend occurred during 2014-2016. National average soybean yield exceeded trend yield expectations significantly and brought into question the veracity of linear trend analysis when forming 2017 yield expectation. By using the best fit in capturing variation from the trend yield, the quadratic trend shown in Figure 2 provides a better fit to the historical data. While it is too early to determine if the recent positive deviations from trend imply a structural change in national average soybean yields (farmdoc daily, October 25, 2016), the increase in planting intentions in many states raises some questions about the true potential size of national average yields for soybeans in 2017. 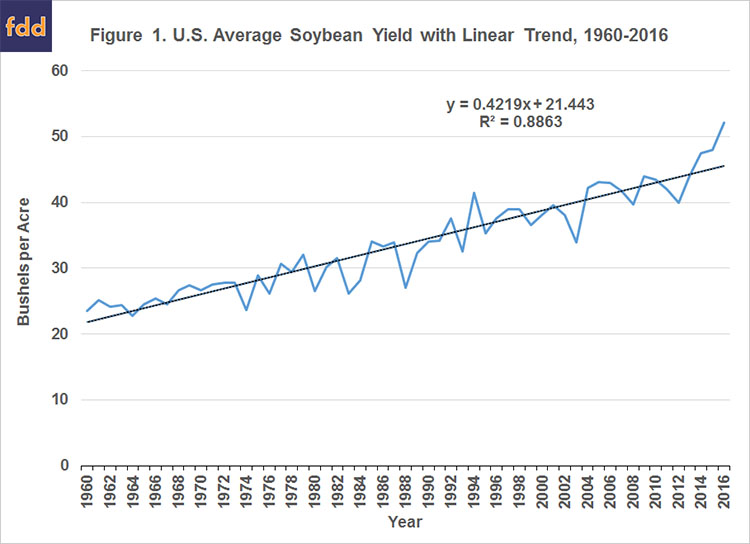 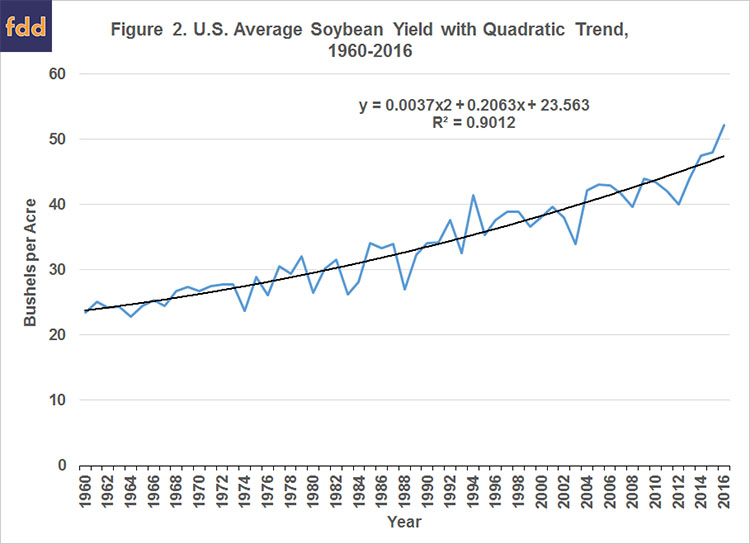 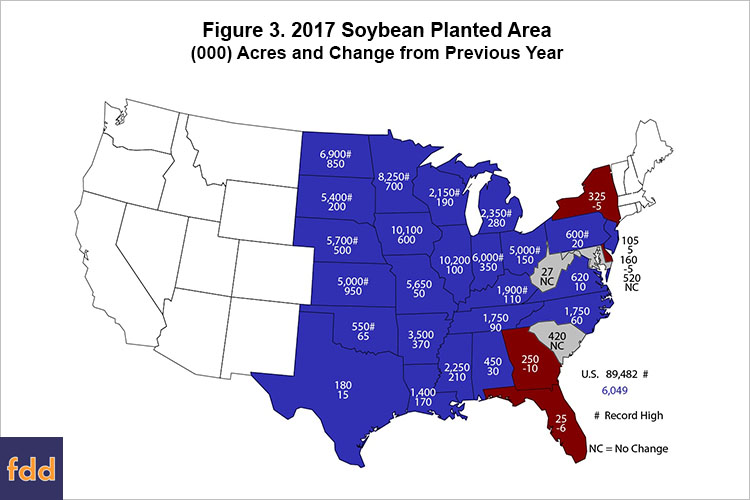 State level soybean yields from 1960-2016 for each state estimated by NASS were collected. All states except New York and West Virginia had data over the full period. New York lacked data from 1981 – 1997. West Virginia’s soybean yield data is available from 2000-2016. For both of these states, trends are calculated with the data available. 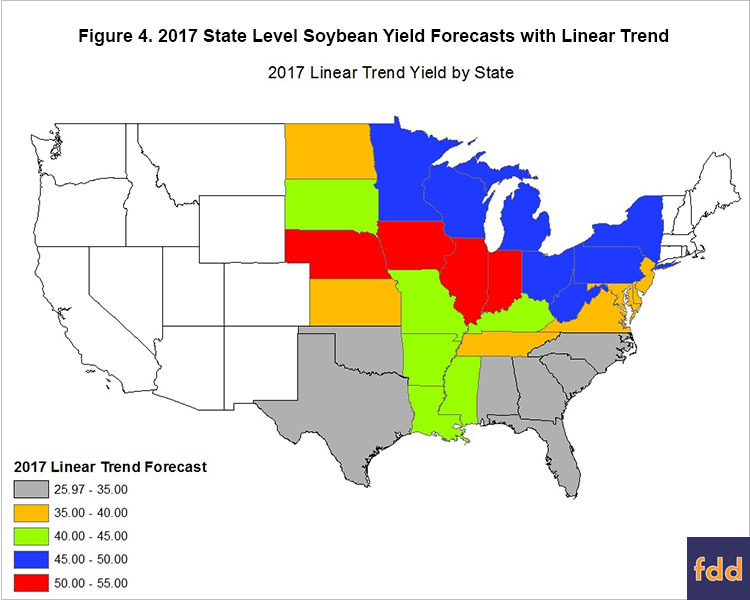 In assessing whether a state has a quadratic fit for yield trend, we assume a state possesses a quadratic trend if the coefficient on the quadratic trend variable is statistically significant. Figure 5 provides a map indicating the best trend model (linear or quadratic) in each state. States in red possess a quadratic fit. The map shows the southern states along with Nebraska have quadratic yield trend fits over the sample period. Figure 6 provides a representative example of the differences between the linear and quadratic trend fit models using Mississippi soybean yield data. Many of the southern states possess a similar type of soybean yield trend, which raises the interesting question of what has been driving the rise in these trend yield growth rates the last twenty years. 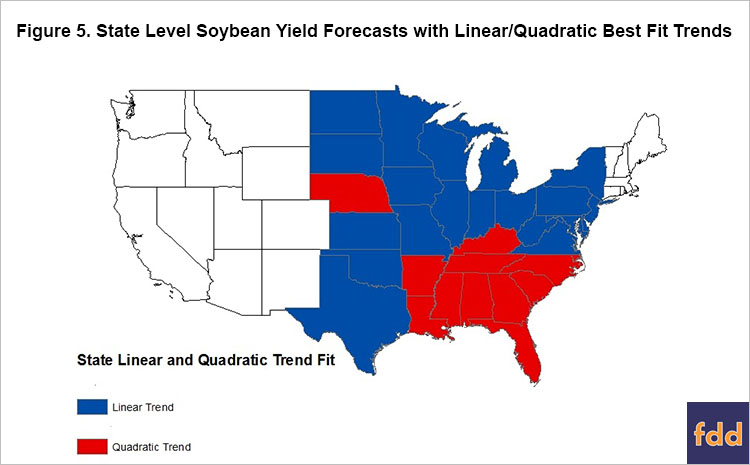 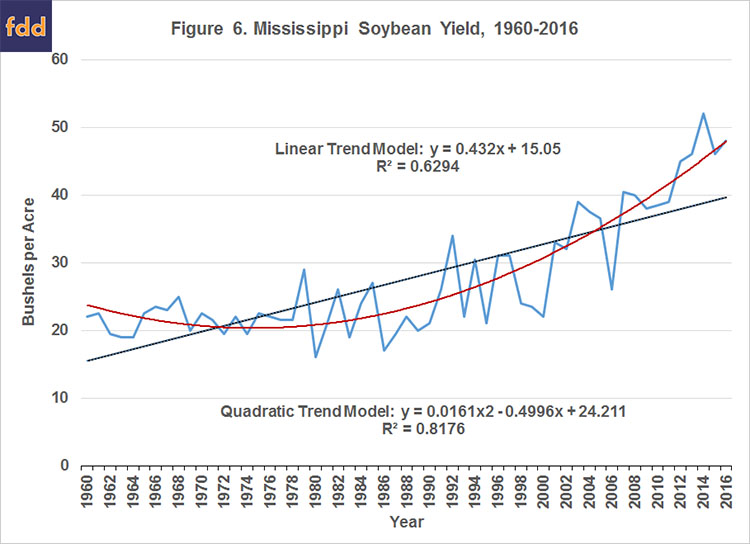 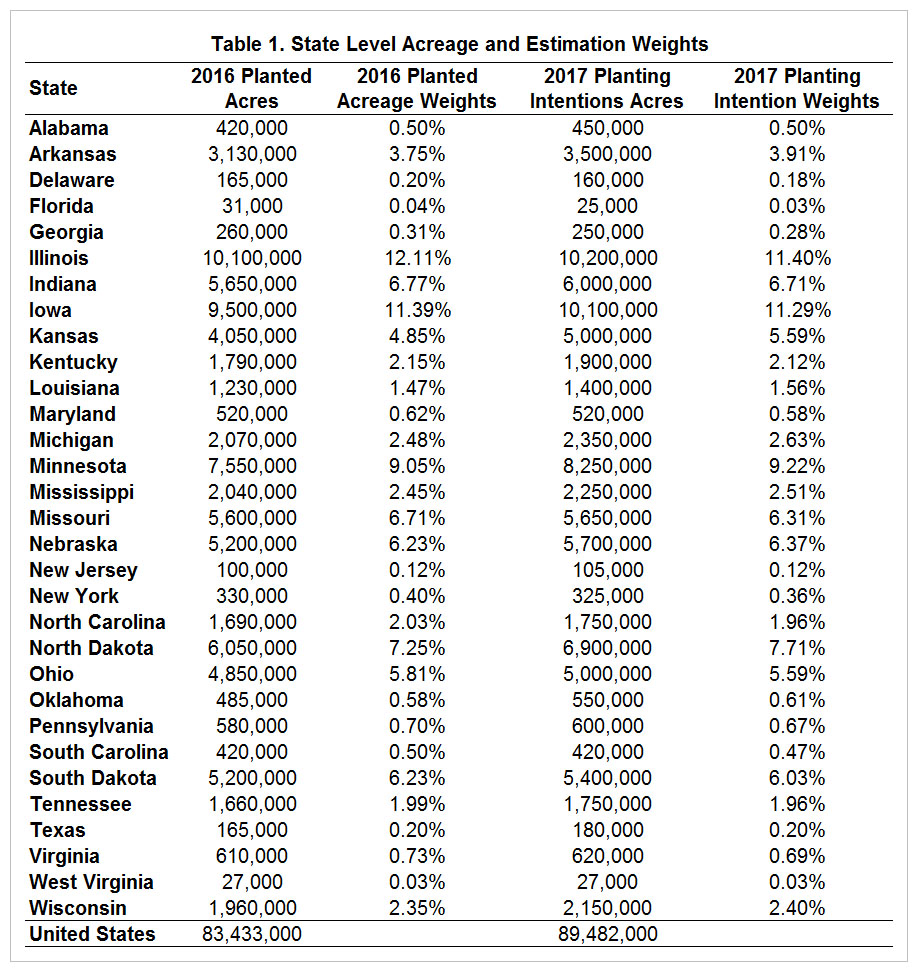 The substantial increase in planting intentions for soybeans in 2017 raises the possibility of a large soybean crop this year. The implications of yield expectations on soybean prices will be pronounced. While many areas increasing soybean acreage do not have historically high yield potentials, the suggestion that the national trend yield for soybeans will be reduced due to this factor is not supported by our analysis using state-level trend models and acreage weighting. The relatively small 2017 adjustments to national average soybean trend projections when considering the acreage shifts associated 2017 planting intentions indicates the use of national trend yield analysis is still the most practical method for forming expectations.