Cattle feeding profitability has been on a roller coaster ride the last couple of years. Estimated cattle feeding returns calculated each month by Iowa State Extension provide insight into the situation Corn Belt feeders face. According to the Iowa State data, which assumes that cattle are placed on feed each month with inputs purchased and fed cattle sold in the cash market without any risk management, cattle feeders suffered horrific losses in both 2015 and 2016. Losses continued throughout 2016 and still averaged a loss of $117 per head for a typical yearling feeding program, and a loss of $216 per head for a typical calf feeding program, during 2016’s October-December quarter.

The situation changed dramatically in 2017. Relying again on the Iowa State estimates, during the first nine months of 2017, feeding returns for yearlings averaged +$198 per head and +$191 for calves. The turnaround was even more dramatic when the monthly returns are examined as monthly yearling returns actually reached +$415 and calf feeding returns climbed over $500 per head during May 2017. The return for feeding calves during May was a new record in the Iowa State data going back to 1981 and the yearling feeding return was the highest value since 2003. The increase in feeding returns during 2003 occurred primarily as a result of a surge in fed cattle prices during the brief time window when Canada was locked out of the export markets because of BSE in Canada and before the U.S. had its first BSE case. The increase in feeding returns in spring 2017 was the result of cattle feeders’ breakevens declining from $117 per cwt. at the beginning of the year to the upper $90’s per cwt., for calf programs, and the low $100’s per cwt., for yearling programs, by spring, combined with a strengthening fed cattle market. Sale prices for fed cattle climbed roughly $20 per cwt. from the beginning of 2017 to mid-spring, pushing the revenue per head up by approximately $250 per head.

What’s happened so far in 2017? Total costs per head have climbed since the peak in profitability last spring, but the increase to date has been modest. Total costs per head for a yearling program rose from $1,388 for cattle marketed during May to $1,420 per head for cattle marketed in September. The big shift occurred in the value of fed cattle marketed. The total sales value per head dropped from a peak of $1,815 to just $1,388 in September as the fed cattle sales price decline from a monthly average near $140 last May to less than $107 in September. To date, it appears that cattle feeders have not repeated the mistakes of 2015 and 2016 with both calf and yearling values trading at more manageable price levels, helping to hold down feeders’ breakeven prices. The real key to profitability will be the direction that fed cattle prices follow the rest of the fall and into early winter. 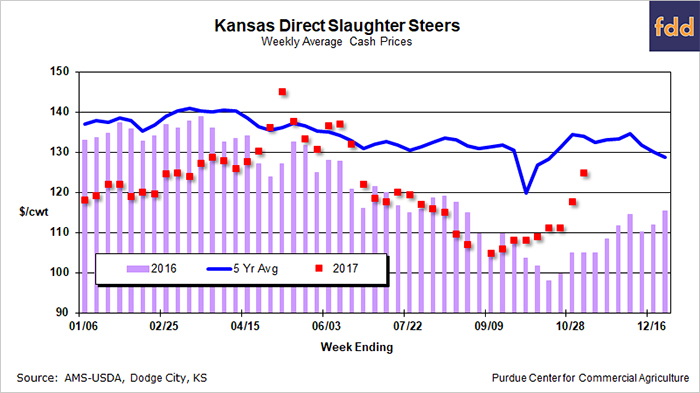 Cash prices for slaughter cattle bottomed in early September, trading near $105 per cwt. in the Southern Plains. Prices have strengthened since then, climbing above $124 last week after trading near $118 a week earlier. The turnaround in fed cattle prices has pushed cattle feeding returns back into positive territory. Given the moderation in feeder cattle prices this year, unlike 2015 and 2016, prospects for cattle feeders to operate profitably the rest of the fall and early winter look good.