Nitrogen fertilizer prices are averaging lower now than in any time since September 2008. These lower prices could translate into roughly a $10 per acre saving in nitrogen fertilizer for the coming 2018 production year. Further savings may be possible for those farms who are applying above recommended nitrogen rates and are willing to cut fertilizer application rates. University recommendations suggest nitrogen application rates well below 200 pounds in northern and central Illinois.

Lower nitrogen prices should translate into lower per acre nitrogen fertilizer costs. To gain a feel of the savings, recommended nitrogen application rates were obtained from the Corn Nitrogen Rate Calculator, a web tool hosted by Iowa State Agronomy Extension and Outreach, in association with many of the land grant universities in the Midwest including the University of Illinois. This tool suggests different “Maximum Return to Nitrogen” (MRTN) rates for three regions of Illinois. For a $3.50 corn price and a $400 per ton anhydrous ammonia price, the MRTNs are 169 pounds of nitrogen for northern Illinois, 186 pounds of nitrogen for central Illinois, and 200 pounds of nitrogen for southern Illinois (see Table 1). 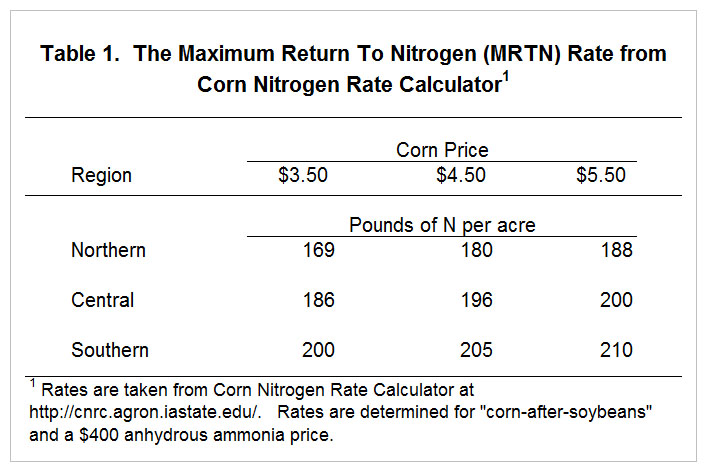 For this example, the 186 pound nitrogen recommendation for central Illinois will be used to illustrate cost savings. This 186 pounds include nitrogen from all sources including from DAP or MAP. An application of 180 pounds of DAP would provide the phosphorus replacement requirements of 200 bushels per acre of corn (see replacement rates in Chapter 8 of the Illinois Agronomy Handbook. This 180 pounds of DAP contain 32 pounds of nitrogen (180 pounds of DAP x .18 analysis). If applied before mid-October, about half of 32 pounds are would be available for plant uptake, or 16 pounds (see Nafziger, Using the N Rate Calculators, The Bulletin, September 27, 2017). This would mean that 170 pounds of N would have to be applied from non-DAP sources (170 = 186 MRTN rate – 16 pounds in DAP). Obviously, this 170 pounds of nitrogen would be more if less DAP is applied. The 170 pounds could be less if DAP is applied after October when three-fourths of the nitrogen in DAP may be available for plant uptake (see Nafziger) or if more DAP is applied.

The $10 per acre in nitrogen savings can vary. Different sources of nitrogen will have different prices and thereby impact nitrogen savings from 2017 to 2018. Furthermore prices could change between now and spring when some or all of the nitrogen will be applied. These price changes can again impact savings.

The rates in Table 1 suggest that applications should not total more than 200 pounds of nitrogen for northern and central Illinois, even if corn prices approach $4.50 per bushel. Some farmers may be applying in excess of 200 pounds of nitrogen. Moving back to the MRTNs in Table 1 will save costs. Given that the nitrogen recommendations are correct, the cut in nitrogen rates will, on average, increase returns. Cutting back costs in today’s low return environment seems prudent.

Anhydrous ammonia prices currently are lower than at any time since 2008. This lower prices will result in per acre cost savings. Cuts in rates to MRTN levels could result in further savings on some farms.