Despite the relatively large meat production increase, fed cattle and feeder cattle prices were stronger than one year earlier. For example, prices for slaughter cattle in the Southern Plains were able to remain above a year earlier during most of the quarter, averaging over $125 per cwt. (live weight) compared to about $122 per cwt in 2017. Fed cattle price strength helped support prices for eastern Corn Belt steer calves and feeder steers as they both averaged well above a year ago during the first quarter. However, unlike fed cattle, much of the relatively large year-to-year price increase in calves and feeders was attributable to very weak prices in early 2017. Prices for 500-600 pound steer calves in Kentucky averaged $160 per cwt. this year vs. $135 in 2017 and prices for 700-800 pound feeder steers averaged $141 per cwt. in 2018’s first quarter vs. $121 per cwt. in 2017. 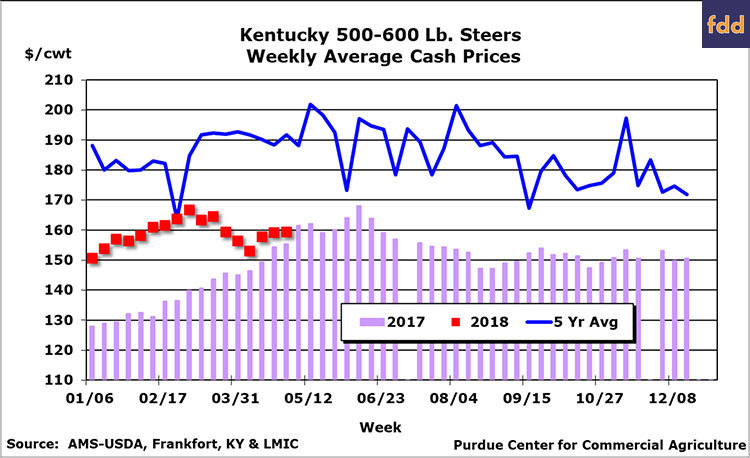 The first quarter’s price strength showed signs of disappearing as the quarter progressed and, by late April, Southern Plains fed steer prices were trading in the low $120’s vs. near $130 a year ago. Kentucky prices for feeder steers were trading near $136 compared to $135 in 2017 and, although Kentucky steer calf prices, trading near $159, were still higher than in 2017, the difference of $3 was much smaller than during January and February. So, what should we expect to take place during the rest of the year? Should we expect cattle prices to recover this spring and summer or will the decline that got underway late in the first quarter continue? 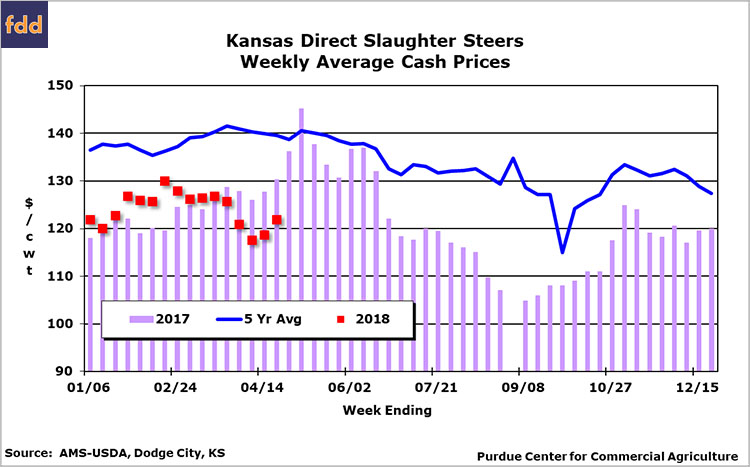 The answer to the question regarding future price direction will be a function of meat supplies, domestic demand and export demand. Looking ahead to the rest of this year, the biggest driver of prices will be meat production in the U.S. And it looks like beef, pork and chicken production will all be larger than in 2017 throughout the rest of 2018. Beef production, in particular, could provide substantial year-over-year increases in meat supplies. One key factor is fed cattle supplies, which will be substantially larger than in 2017. According to USDA’s April Cattle on Feed report, the April 1 on feed inventory was up over 7% compared to last year and was the largest April on feed inventory since 2006. The expected rise in fed cattle marketings will help push average slaughter weights up, resulting in a larger production increase than cattle slaughter alone would suggest. Increases in both beef and dairy cow slaughter will also help push beef production higher the rest of the year. The combination of larger slaughter and heavier weights could push beef production up 6 to 8% over the next six months.

Strong beef export demand helped support prices during 2018’s first quarter. Data from January-February indicates total beef exports were nearly 13% larger than during the first two months of 2017. Although exports to Japan and Canada were weaker than in 2017, declines in those two markets were more than offset by increases in shipments to virtually all other export destinations. Strong export demand is expected to continue, unless trade friction leads to imposition of tariffs on beef exports to key NAFTA and/or Pacific Rim destinations.

Domestic demand for beef showed signs of strength in early 2018. Continued strong economic growth in the U.S. should be supportive of beef demand, but large competing meat supplies will provide U.S. consumers with many alternatives during the rest of 2018. For example, pork production this spring and summer could rise 4% above a year earlier and chicken production could increase about 2% compared to the same period in 2017.

Increasing beef production, combined with larger pork and chicken production, will exert substantial downward pressure on slaughter cattle prices the rest of the year. Compared to 2017, the April-June quarter price average for slaughter steers could decline 10% or more. Summer and fall quarter prices are expected to remain below a year ago as well, although the percentage decline will likely be less than 10%. Kentucky steer calf and feeder steer prices are also expected to weaken. A combination of seasonal price weakness and declines in expected fed cattle prices could push Kentucky steer calf prices into the low $140’s by mid-summer with prices likely to remain in the $140’s this fall.