The USDA’s first condition rating on June 3, 2018 indicated that 75 percent of the U.S. soybean crop was rated in good or excellent condition.  In conjunction with trade issues, the strong condition ratings for the soybean crop has undoubtedly contributed to the rapid drop in soybean futures prices in recent weeks.  Previous farmdoc daily articles (May 24, 2017; June 1, 2017;  June 13, 2018) have emphasized the limited information in early season crop condition ratings.  In particular, the analysis in these articles indicated: (1) there has been a strong correlation between trend-adjusted U.S. soybean yields since 1986 and the percentage of the crops rated in good or excellent condition at the end of the season; (2) the correlations between crop conditions and yields are low early in the season and then rise sharply for soybean in mid-August; and (3) an adjustment to the ratings for a seasonal pattern of bias improves early season yield forecasting.  The purpose of this article is to update our earlier analysis and then draw implications of the current high condition ratings for 2018 soybean yield expectations. 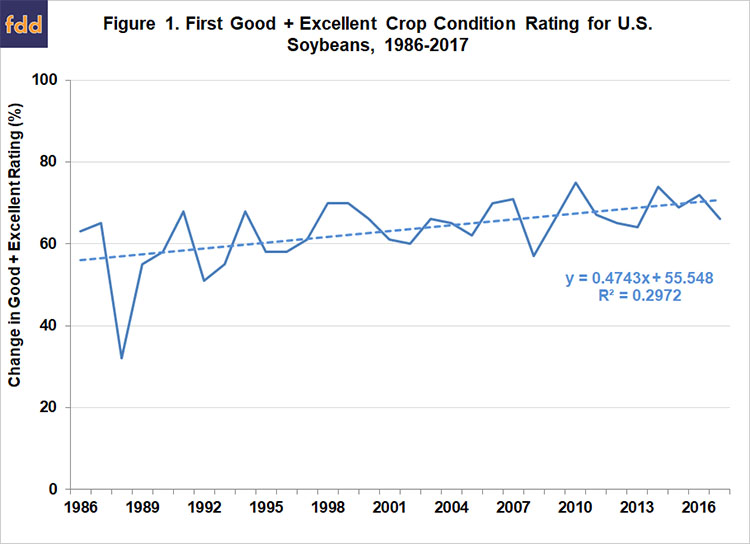 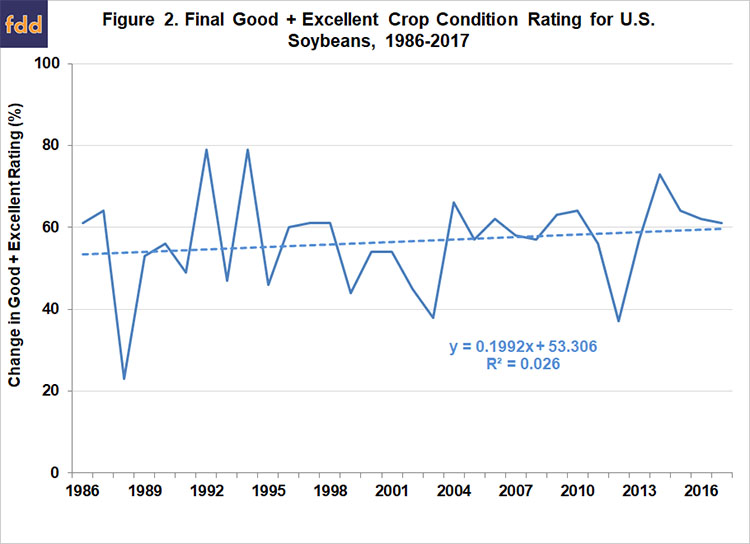 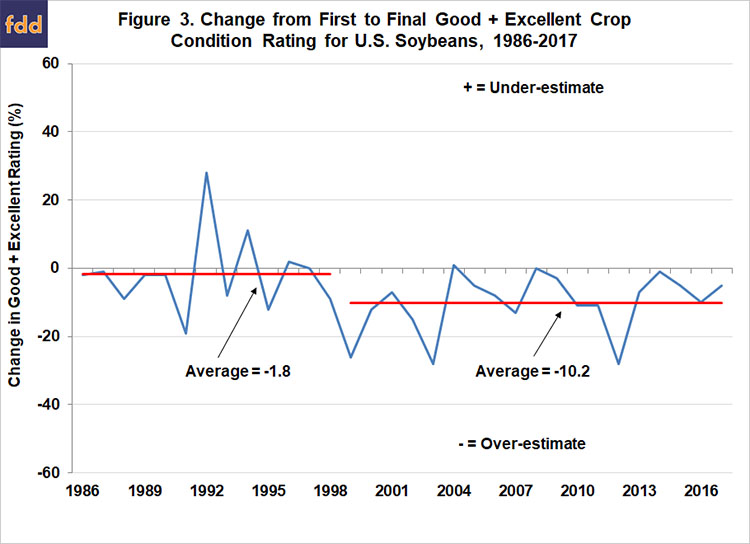 The reasons for the trends in crop condition ratings in the first and final ratings and the structural change observed beginning in 1999 are not known.  Those changes could be related to changes in weather patterns that influence condition ratings, earlier planting of soybeans, changes in crop production practices, or changes in the methodology of estimating crop conditions.  Some speculate that changes in the make-up of crop observers over time may also have contributed to the change.  Regardless of the reason, going forward it is likely prudent to use the larger bias since 1999 to adjust the first rating in forming yield expectations.

We repeated the analysis on changes from final crop conditions, depicted in Figure 4, for each week of the growing season beginning in the second week of June.  We calculated the average change (bias) in the percentage of the crop rated good or excellent in the rating for each week and the final rating of the season.  Those averages were calculated separately for the periods 1986 – 1998 and 1999 – 2017.  As expected based on the analysis of the bias in the first rating of the season, the pattern of the average weekly bias during the growing season was very different in the early and later periods.  For the early period, the average weekly bias was near zero in mid-June, declined to about -2 by mid-July, increased to about +2 by mid-September, and then declined slightly through the end of the season. In the latter period, the bias was near -9 points in mid-June and steadily approached zero by early September.  The bias increased to approximately +0.7 by mid-September and then declined to zero through the end of the season. 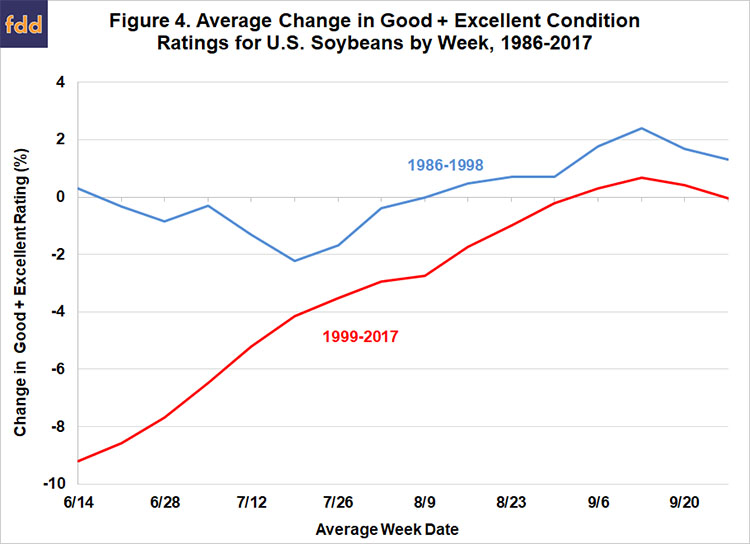 An assessment of modeling soybean yield for the period 1986 through 2017 using end-of-season good and excellent crop condition ratings is shown in Figure 5.  It should be expected that the relationship between yield (adjusted for trend) and the combined percentage of the crop rated in good and excellent condition would be the strongest at the end of the growing season when uncertainty about growing conditions has been largely resolved.  The percentage of the crop rated good or excellent in the final report of the year explained nearly 70 percent of the annual variation in the trend-adjusted U.S. average soybean yield.  Soybean yields are adjusted to 2018 technology using linear trends for 1986-2017.  Further evaluation of good and excellent crop condition ratings and soybean yield is provided in Figure 6.  The correlation between average weekly good and excellent crop ratings with the detrended, final U.S. average soybean yield shows a very low correlation early in the growing season.  The correlation builds to about 0.76 in the last week of July and then declines into early August. The correlation picks up again in mid-August with strong growth to approximately 0.80 in the last week of August that continues until the final crop rating.  The strong relationship after mid-August gives credence to using crop condition ratings for projecting yield potential throughout the latter part of the growing season.  By conditioning the implied yield for bias in rating as we move through the early portion of the growing season, a more accurate presentation of yield potential is attained.  But even after making this adjustment it must be said that the relationship of early season ratings and final yields will still be weak, on the order of only 0.4 to 0.5. 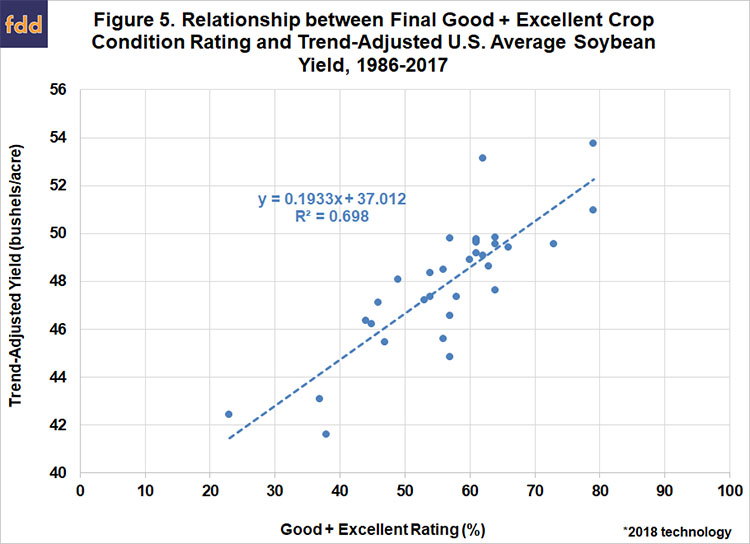 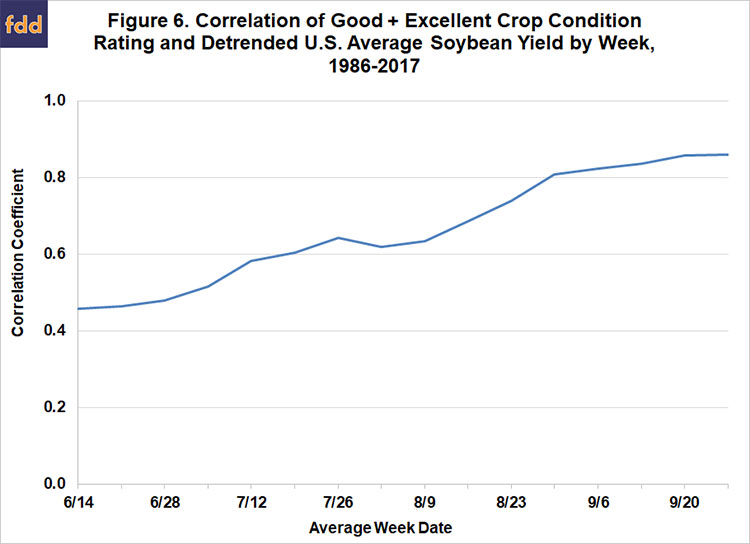 A widely used method of forecasting soybean yields is based on the relationship between end-of-season good plus excellent crop condition ratings and final yield.  One can then plug within season ratings into the model as they become available to project yield in real-time.  However, this method can suffer from the tendency of ratings to be biased upward early in the season because the crop typically starts in good condition and then conditions either maintain or deteriorate based on adverse weather.  Here, we investigate the magnitude and seasonal pattern of the bias.  We also show a structural change in the magnitude of the upward bias in first crop condition ratings starting in 1999.  The reasons why the bias would increase so sharply are not clear.

A real-time application of the results can be made using the USDA’s Crop Progress report of June 11, 2018, which indicated that 74 percent of the soybean crop was rated in good or excellent condition as of June 10.  Over the past 19 years, the average percentage of the crop rated good or excellent in the Week 23 rating of the year was about 9.2 points higher than at the end of the season.  Based on that average, current crop condition ratings point to 64.8 percent of the crop being in good or excellent condition at the end of the season.  Based on the historical relationship we estimate using data over 1986-2017, the projected average yield for 2018 is:

This projection is only 1 bushel higher than the USDA’s trend projection of the U.S. average soybean yield for 2018, but is 1.5 bushels higher than the unconditional trend estimate (48 bushels per acre) derived from the crop condition model. If we alternatively make no bias adjustment, the projected soybean yield assuming 74 percent good and excellent ratings increases to 51.3 bushels per acre.  Given the sharp drop in futures prices in recent weeks, it is possible that the market has not been discounting the early season condition ratings for soybean as much as history would suggest.  Regardless of the degree of bias adjustment, the correlation of condition ratings this early in the season with final U.S. average yields is low, on the order of only 0.4 to 0.5.  This suggests that yield projections based on crop conditions this early in the season should be treated with a great deal of caution.  The good news is that we will know a lot more about yield prospects in a month or so.