The House and Senate have respectively passed their versions of a 2018 Farm Bill and now a conference committee will attempt to work out differences.  Both the House and Senate include versions of the Agricultural Risk Coverage at the County Level (ARC-CO) and Price Loss Coverage (PLC), two of the three commodity title programs available under the 2014 Farm Bill.  The House version eliminates the third program— ARC at the individual farm level (ARC-IC) — while the Senate leaves it in.  ARC-IC was selected for 0.9% of all base acres at the time of the 2014 farm bill sign up.  Assuming that ARC-IC election remains low or does not exist, farmers and landowners will again choose between ARC-CO and PLC for each program crop on a Farm Service Agency (FSA) farm.  We compare the House and Senate versions of ARC-CO and PLC by first computing payments for the four alternatives for corn in DeKalb County, Illinois over the 2014 to 2018 crops.  We also evaluate estimates of future outlays made by the Congressional Budget Office (CBO). From 2018 to 2022, the expected life of the 2018 Farm Bill, PLC under either the House or Senate versions is expected to make larger payments than either ARC-CO under the House or Senate versions.  Unless the conference committee modifies ARC-CO to make its expected payments more equal to PLC, most corn base acres likely will be enrolled in PLC, a reverse of the 92% of acres enrolled in ARC-CO under the 2014 Farm Bill.

Since the current ARC-CO and PLC program serves as the basis for all alternatives, we begin by describing payments for the 2014 program (for more detail, see farmdoc daily, February 20, 2014).  Figure 1 shows actual ARC-CO and PLC payments in 2014, 2015, and 2016 for a corn base acre in DeKalb County.  Also shown are projections for 2017 payments, which will be received this October, and for 2018 payments, which will be received in October 2019. 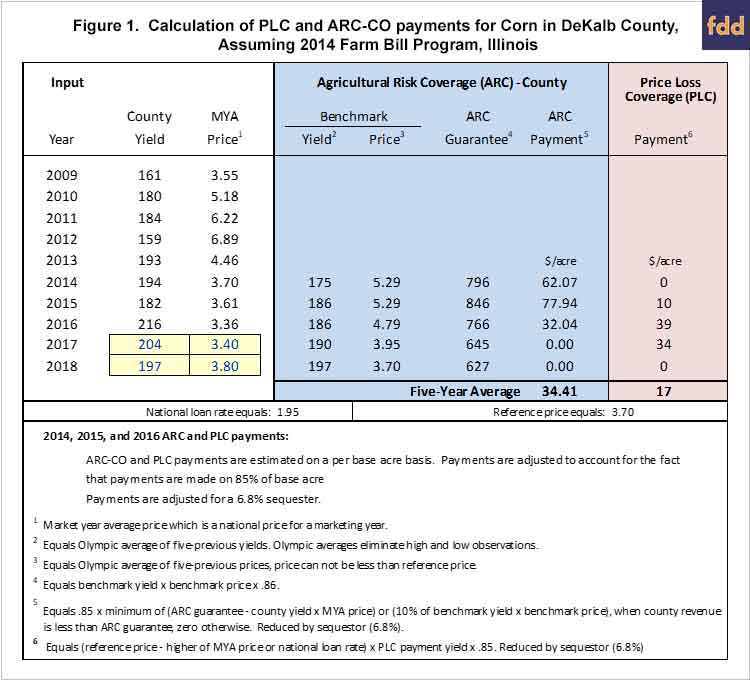 ARC-CO is a county-level revenue which pays when county revenue (county yield x MYA price) is below a revenue guarantee.  The revenue guarantee equals .86 times a benchmark yield times a benchmark price.  The .86 is the coverage level and was set in the 2014 Farm Bill.  During the 2014 Farm Bill negotiations, debate occurred about the level of the coverage level.  Benchmark yields and benchmark prices are Olympic averages of the five previous prices (eliminate the high and low equals).  When county revenue is below the ARC guarantee, a shortfall is calculated that equals the guarantee minus harvest revenue.  The shortfall cannot exceed 10% of the benchmark price times the benchmark yield. The ARC payment equals 85% times the shortfall.  In each year since the 2014 Farm Bill has been implemented, payments have been reduced by a 6.8% sequester amount.  As a result, all payments in Figure 1 are reduced by 6.8% 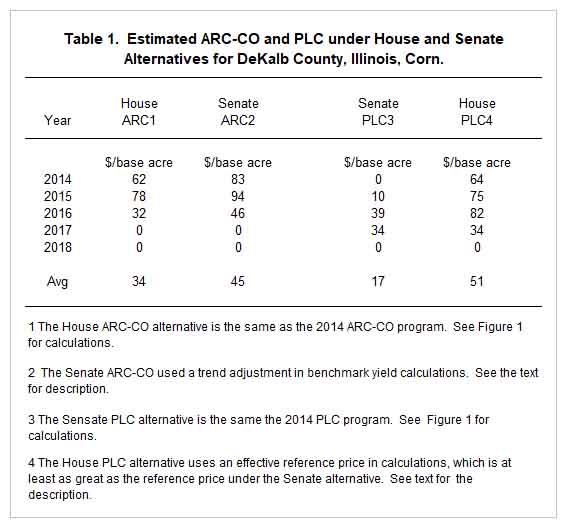 Effective reference prices under the House PLC program would have been:

Effective reference price is higher than the $3.70 reference price in the years from 2014 to 2016, resulting in larger payments. In 2014, for example, the House PLC program had a $64 payment versus a $0 payment under the Senate (and existing) program. Over the 2014 to 2018 period, the House PLC version is estimated to have paid $51 per acre, $34 higher than the Senate PLC version. Had it existed, the House PLC program would have made higher payments in DeKalb County than the two ARC-CO alternatives and would have made expectations of payments by ARC-CO and PLC at the time of the 2014 farm bill sign up much closer. Note that the House PLC version is projected to make no payment for the 2018 crop.

The above analysis is historical illustrating the impacts of changes proposed by the House and Senate.  Payments on the commodity programs moving forward are the concern as negotiations on the 2018 Farm Bill continue.  The Congressional Budget Office (CBO) makes projections for commodity title programs using projected MYA prices. In their forecasts, CBO is using expected MYA prices for corn near the reference price of $3.70 per bushel for the years from 2019 to 2022 (see Figure 2). 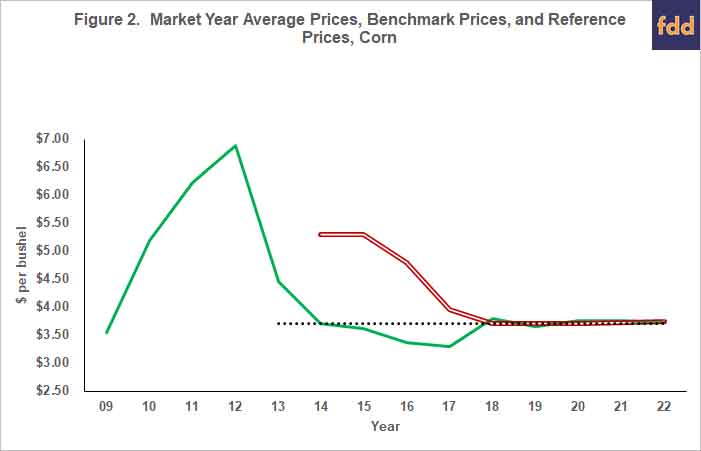 These CBO price forecasts result in a much different price environment than when the 2014 Farm Bill was passed.  In 2014, the benchmark price for ARC was $5.29 per bushel, much higher than the $3.70 reference price (see Figure 2).  The benchmark price was also higher than the actual MYA price.  As a result, ARC-CO was expected and did make higher payments for corn than PLC in most cases across the United States.

Prices near $3.70 from 2018 to 2020 would cause the ARC benchmark price to be almost the same as the reference price (see Figure 2).  In this case, PLC will be expected to have higher payments than ARC-CO.  Any MYA price below $3.70 will trigger a PLC payment.  In contrast, much lower prices would have to occur before ARC-CO would make a payment.  Given that county yield equals benchmark yield, the MYA price would have to below $3.18 ($3.70 x .86 coverage level) before ARC-CO would make a payment.  Because prices need to be much lower under ARC-CO, payments are expected to be much lower under ARC-CO than PLC 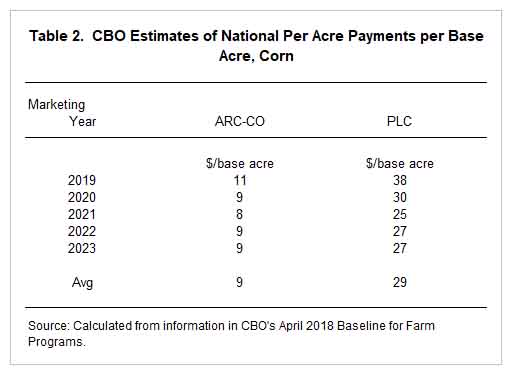 The Senate version of ARC-CO would result in higher payments for ARC-CO than those shown in Table 2 because the use of trend-adjusted yields and floors of 75% of t-yields will result in higher yield benchmarks and ARC guarantees.  CBO’s estimate of program outlay changes for the Senate version suggest modest increases in spending of an average $20.5 million per year for marketing years from 2019 to 2023 (see Congressional Budget Office, Cost Estimates of S. 3042).  The $20.5 million is applicable to all program crops. However, even if all the $20.5 million were applied to corn, expected payments would increase by $1.35 per corn base acre.  This increase would leave expected payments for ARC-CO near $12 per base acre, still well below those for PLC.  It is unlikely this increase would change any decisions by farmers as to which program to elect.

Turning to PLC, the House alternative will have at least as high of payments as shown in Table 2 for the Senate version because the House version has the potential escalator provision for reference prices.  CBO estimates the impacts of the effective reference price mechanism to be minor for corn, with PLC payments for corn increasing $5 million for the ten fiscal years from 2019 to 2028 (CBO, https://www.cbo.gov/system/files/115th-congress-2017-2018/costestimate/hr2.pdf).  This $5 million total increase would work out to be less than an increase of $1 per corn base acre.  The reason for this low estimate is that MYA prices are not expected to get high enough to cause the effective reference price to exceed the reference price.