USDA released its August Cattle on Feed report last Friday, providing an update with respect to the current on feed inventory along with estimated placements on feed during July, which will influence fed cattle marketings later this year and in early 2019.  The August 1 on feed inventory was 11.1 million head, 4.6% larger than a year earlier and 9.1% larger than on August 1, 2016. USDA’s inventory estimate was actually very close to pre-release estimates, which averaged 4.4% above last year’s inventory. USDA’s estimate of placements of cattle on feed during July, at 8% above a year earlier, was somewhat larger than the trade expected as pre-release estimates averaged 5.5% above the August 1, 2017 inventory. Fed cattle marketings during July were 5% larger than during July 2017 and over 9% larger than in July 2016 according to USDA and were in line with pre-release expectations. 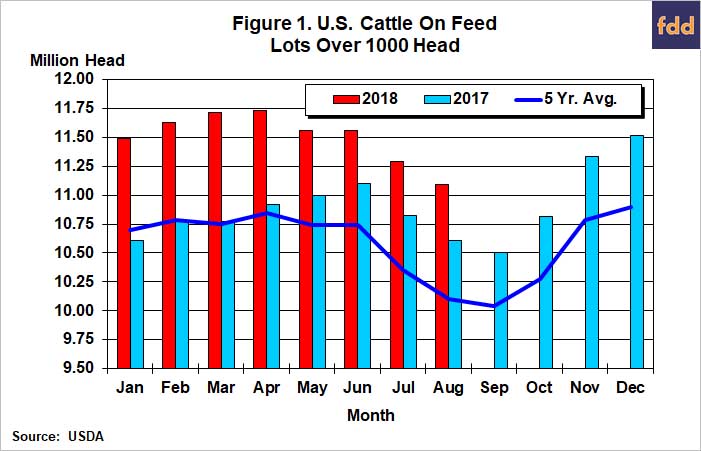 Through late August, federally inspected cattle slaughter this year was 2.8% larger than last year, and slaughter during July-August was up 2% compared to 2017. Year-to-date beef production was up 3.1% compared to 2017. However, during July-August beef production did not increase as much as slaughter, averaging 1.8% above the same period in 2017, since dressed cattle weights this summer averaged 812 pounds compared to just over 813 pounds last year. Dressed steer weights, a good indicator of fed cattle weights, were heavier this summer than last, but the increase was small, averaging just 0.2%. Overall, the weights data suggests feedyards managed to keep fed marketings current this summer.

After starting 2018 off stronger than a year earlier, prices for fed steers and heifers were consistently lower than in 2017 until the last couple of weeks when they were 1 to 2% higher than last year. Prices for fed steers in the Southern Plains averaged about $111 per cwt. during July-August, down 4% from the same time last year when weekly prices averaged $115.57 per cwt. Recent boxed beef prices have been stronger than in 2017, with the Choice boxed beef price averaging over $208 per cwt. in August 2018 compared to about $199 per cwt. in August 2017. If the strength in boxed beef prices continues, it should be supportive of fed cattle prices and prevent a repeat of last year’s sharp decline in fed steer and heifer prices that took place from mid-August to mid-September. 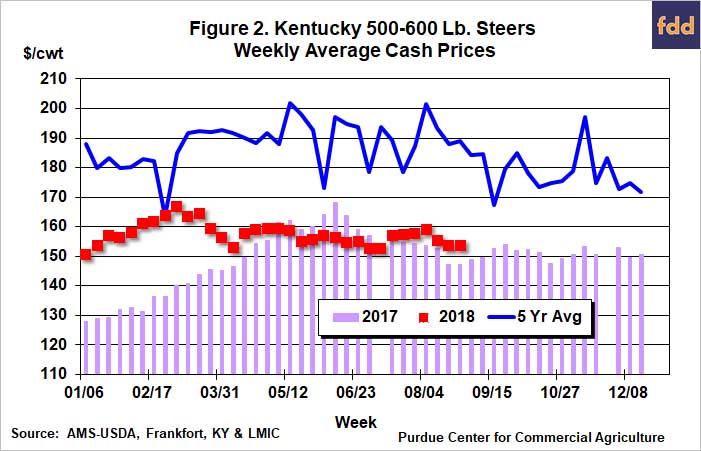 One troubling aspect of this year’s beef price environment is the ongoing weakness in byproduct values. From a long-term standpoint, by-product vales bottomed out during the depths of the recession in 2009 at just $61.69 per head. Supply reductions, combined with stronger demand emanating from an improving U.S. and world economy, helped push by-product values to their all-time high in 2014 of over $170 per head. Values have been declining since 2014, however, and during July 2018 beef by-product values averaged just $103 per head, down from over $120 per head in July 2017. One concern about by-product values this fall is their reliance on export channels to move product. Ongoing trade disputes could disrupt not only higher valued meat exports, but also by-product movement.

Recent fed cattle prices have been well below breakeven levels for most cattle feeders resulting in significant feeding losses. Iowa State’s estimated feeding returns for yearling programs have produced losses for the last four months and estimated returns to calf-based feeding programs produced losses in both June and July. Cattle feeders appear to be headed towards yet another month of losses when costs and returns are summarized at the end of August. Losses among cattle feeders this summer and early fall could dampen demand for replacement cattle this fall.

Eastern Corn Belt feeder cattle and calf prices were supported this summer by weaker feed grain prices and expectations that feeding costs of gain will continue to decline. Prices for 500-600 pound steers in Kentucky averaged $155 per cwt. during July-August, up modestly compared to last year’s average of about $153 during the same time period. Last fall, Kentucky steer calves averaged about $151 per cwt. This fall, prices are likely to fall slightly below that level, averaging in the upper $140s as losses in the feedlot sector weakens demand for calves.