On July 24, 2018, President Trump announced that the U.S. Department of Agriculture (USDA) would provide a $12 billion program of assistance to U.S. farms to address economic loss from his use of tariffs to impact trade policy (Bernstein, 2018). As reported, the program consists of (1) approximately $7-$8 billion in cash payments to corn, cotton, dairy, hogs, sorghum, soybeans, and wheat; (2) purchase of beef, fruits, legumes, milk, nuts, pork, and rice for distribution to food banks and nutrition programs; and (3) $200 million or so in additional spending on trade promotion programs. To provide perspective, this article examines the changes in quantity of exports and market value of production that coincide with the tariff conflict. Barley, corn, cotton, oats, rice, sorghum, soybeans, and wheat are examined. Data are from the monthly World Agricultural Supply and Demand Estimates (WASDE). Losses in market value of production are concentrated in corn and, especially, soybeans.

When assessing economic loss, it is important to have a good estimate of value that predates the start of economic loss. The May 11, 2018 WASDE predates the impact of the tariff conflict on crop prices. A reasonable start date for market impacts of the tariff conflict is May 29, 2018, when President Trump announced the U.S. would impose tariffs by June 15 (see farmdoc daily, July 13, 2018).. Prior to this date hope existed that an agreement could be reached to avoid the imposition of tariffs and counter-tariffs. The August 10, 2018 WASDE is the most recent issue.

Since tariffs are imposed on imports, an obvious measure of a tariff conflict’s impact is the change in quantity of exports. Caution however is in order. Net impact of a “trade dance” needs to be considered. Using U.S. soybeans as an example, China has reduced imports from the U.S. as it outbids other countries for South American soybeans that are cheaper than U.S. soybeans with a 25% counter-tariff. South America has fewer soybeans to sell to Europe, which in turn buys more U.S. soybeans (see Good, 2018). One thus has to examine U.S. exports in total, not to an individual country, such as China. 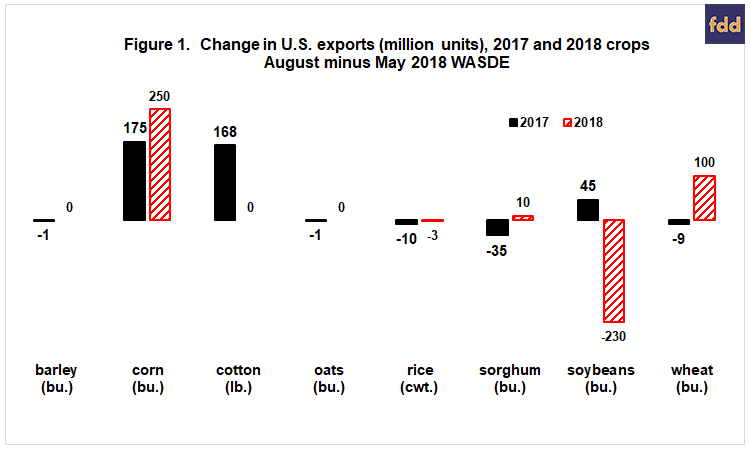 Several factors impacted the changes in projected exports. They include tariffs as well as supply availability and demand momentum. Crop production problems occurred in a number of countries, including notable droughts in Argentina earlier this year and northern Europe this summer. No attempt is made to parse out the causes of the change in exports due to the simultaneous occurrence of many of the factors and complications from the “trade dance” discussed in the previous paragraph.

Even if export quantity does not decline, economic loss can result from tariffs. Everything else constant, U.S. prices will likely need to decline to encourage non-traditional importers to buy from the U.S. The midpoint price projection for the 2018 crop marketing year in the August 2018 WASDE are lower than in the May 2018 WASDE for corn, oats, rice, sorghum, and soybeans (see Figure 2). Soybeans has the largest decline, 11%. Price is the same for barley and higher for cotton and wheat. 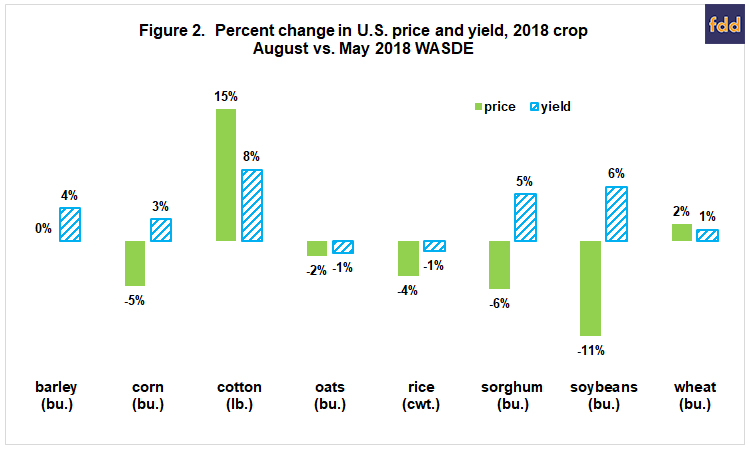 Similar to export quantity, the storyline is complicated by changes in other factors. Projected yields were higher in August than May 2018 for all U.S. crops excluding oats and rice (see Figure 2). The U.S. dollar appreciated against many currencies, making U.S. exports more expensive. Production expectations were also changing for other countries. Australia, Europe, Russia, and Ukraine had enough growing season problems to reduce the likelihood of above trend-line 2018 production. Moreover, 2018 crop year production of corn and soybeans in Argentina and Brazil is expected to increase by 17% and 13%, respectively (see August 2018 WASDE).

If crop prices had dropped all at once on May 29 or even over the next week, the decline could be attributed with high probability to the tariff announcement. Instead the decline has been persistent and cumulative (see farmdoc daily, July 13, 2018). And, other factors have impacted prices. It is thus desirable to parse out the economic loss caused by the tariffs. But this is difficult given the number of variables changing at the same time. Moreover, we have no observed historical period where a tariff conflict involving agricultural commodities can be examined and used as a guide for the current situation.

Soybeans have by far the largest decline in value of production (see Figure 3). This is unsurprising because it has the largest quantity of production subject to counter-tariffs (China). Corn has by far the second largest decline. This is also unsurprising. Corn and soybeans compete against each other over the largest number of U.S. acres. It is reasonable to expect acreage planted to corn to increase in 2019 as acres shift out of soybeans. Even though the acreage shift is for the 2019 crop, markets are expectational in nature. Future expected declines in prices are transmitted to earlier prices, including cash prices, via changes in expected future stocks. 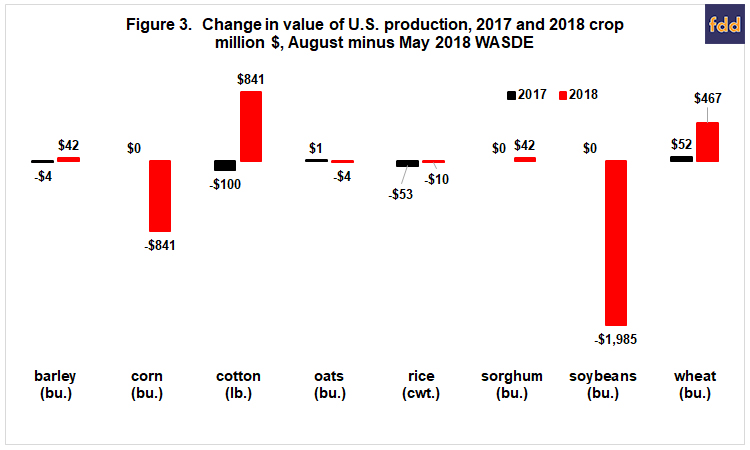 Bronstein, H. “U.S. says farmers could get cash aid by Oct but will not be made whole.” Reuters News.” July 30, 2018 (3rd update). https://www.reuters.com/article/us-g20-argentina-usa/u-s-says-farmers-could-get-cash-aid-by-october-but-will-not-be-made-whole-idUSKBN1KI0KA