As the trade conflict with China continues, prices for many agricultural commodities remain relatively low. Illinois corn and soybean prices dipped to new lows in September, coinciding with the latest rounds of tariffs. The difference between selling an entire crop at spring forward bid prices compared to the September average cash prices makes a substantial difference in income on an average central Illinois grain farm. The United States Department of Agriculture (USDA) has responded with the Market Facilitation Program (MFP), though which assistance will be provided to farmers in effort to offset price declines due to Chinese tariffs. In this article we examine the impact of price changes and expected MFP payments on net income at the farm level.

In the figure below, Central Illinois corn and soybean prices are shown in conjunction with a timeline of significant events in the escalating trade negotiations by the Trump Administration. This is updated from the original version to include newly enacted tariffs and the continued, lower prices for the two crops since May (see farmdoc daily, July 31, 2018). 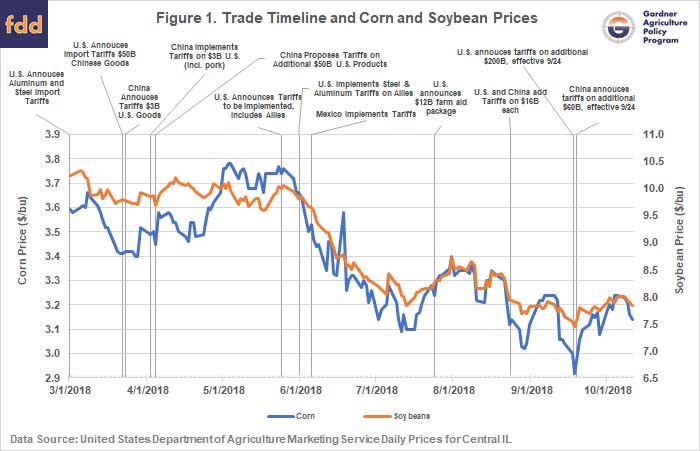 On September 17, the U.S. announced plans to implement tariffs on an additional $200 billion of Chinese products, effective September 24. The following day China announced plans to retaliate with new tariffs on $60 billion of U.S. product, also effective September 24. As plans for new rounds of tariffs were introduced, the central Illinois cash price for both crops reached six month lows at $7.45 for soybeans and $2.92 for corn (click here for prices).

Two pricing points are considered to illustrate price changes during the year.  The first is the average of forward bid prices from January to May of 2018 (click here for prices).  These prices represent the opportunity that farmers had during the first half of the year to lock in prices for 2018 fall delivery of the crops. The second is the September cash price for fall delivery of the 2018 crop in central Illinois (click here for prices).

Most farmers do not sell an entire crop in the spring or at harvest, but rather market part of the expected crop throughout the year, resulting in an average market price. The farmdoc projections used in Illinois Crop Budgets gives projections of these 2018 bid prices, with actual historical price data of grain farms enrolled in the Illinois Farm Business Farm Management Association (FBFM) program serving as benchmarks. In the most recent projections for 2018, the estimated corn price is $3.65 and estimated soybean price is $8.50 (see Illinois Crop Costs). These prices are based on about 30% of expected production being priced during the spring of 2018.

The impact of these price changes on income is estimated using the Gardner Farm Income and Policy Simulator (GFIPS). The case farm is 1,700 acres and farm characteristics, tenure, and beginning financials are based on actual FBFM data for central Illinois farms with 1,500-2,000.

As shown in Table 2, the difference in pre-harvest hedging the entire crop in the first half of the year for fall delivery versus making cash sales out of the field equates to a drop in 2018 net income from $175,718 to ($69,838). The September price scenario looks to be the reality for farms that did not do pre-harvest hedging but still have exceptional yields.

Again, most farmers will not price all grain in the “first half” or “September”, but will be closer to “farmdoc Budget Prices” by marketing throughout the year.  With farmdoc budgeted prices, 2018 net income is $80,348 for an average central Illinois grain farm. This is approximately double the net farm income projected using the model in June (see farmdoc daily, June 26, 2018).

Overall, 2018 looks to be an average income year for farms that have 1) exceptional yields and 2) did some pre-harvest hedging. There will be considerable variability in incomes due to pricing patterns of farmers, and because of yield variability across farms.

As part of the United States Department of Agriculture trade aid package, the MFP provides cash payments to farmers of corn and soybeans among other commodity crops (see farmdoc daily, August 28, 2018). Payments are to be made using a specific rate per bushel on 2018 actual production. In Illinois, average payments are estimated at $53 per acre for soybeans, $1 per acre for corn, and $5 per acre for wheat.  MFP payments will significantly increase 2018 incomes. With the MFP payment, the case farm net income rises to $130,426. This income level likely will allow most farmers to build working capital.  With the MFP payments, net income in 2018 could be above that for 2017, but it will still be below expectations during the earlier part of the year.

More dramatic impacts of trade disputes will begin to be felt in 2019, when all incomes are projected to be significantly negative, near ($70,000) per farm. These 2019 projections are based on trend yields and increases in production costs.  There are no MFP payments included in these projections.  Prices are $3.60 per bushel for corn and $8.50 per bushel for soybeans.  The $8.50 soybean price would be well below the average of prices farmers have received for soybeans in recent years. If this scenario holds, any surplus working capital built in 2018 will be needed to partially offset losses in 2019.

All 2019 (and future years) inputs are exactly the same under all four scenarios, price change or addition of the MFP payment were made in 2018 only. However, as shown in Table 2, the income for 2019 (and future years) is not the same in all four scenarios. The level of income in a single year has a lasting impact on financial stability in future years. For example, the lost income offset by the MFP payment allows the farmer to pay down loan balances, therefore resulting in less interest paid, not only in that year but also future years.

Table 3 includes a comparison of changes in three key financial ratios from the base year to the end of 2019 under each price and payment scenario. This comparison shows how the difference in 2018 income in each scenario makes a difference in financial stability in 2019, a year with significant loss. With the 2018 MFP payment, the farmer is able to maintain an adequate level of liquidity throughout 2019. Alternatively, the current ratio, a measure of liquidity, falls very close to the 1.50 threshold that most financial advisors would consider an acceptable level without the 2018 MFP payment. Liquidity is an important factor in being able to continue to farm. The added income from the MFP payment helps the farmer build working capital, which will be greatly needed in 2019. Given that the average farm has an equity base in land, solvency as measured by the debt-to-asset ratio remains acceptable in all scenarios. Because income is a factor capacity, the debt coverage ratio is very weak in all scenarios. Without the MFP payment, this case farm would likely need to sell farm assets in order to meet debt obligations and continue farming. Even with the MFP payment, price correction is needed to keep farmers from resorting to sales of assets needed to farm.

The change in corn and soybean prices during 2018 underscores the importance of marketing strategies that include sales or hedging throughout the year. But there is risk on both sides. Some years, like 2012, marketing in the first half of the year would result in much lower prices than if marketed near harvest. Farmers can’t market all expected grain until harvest when actual production is known.

The impact of the ongoing trade conflict will show up at the farm level, with timing dependent on marketing. Farm incomes may be sufficient to build working capital in 2018 for farms that have exceptional yields and did some pre-harvest pricing. MFP payments are also important in building 2018 working capital.  The building of this working capital will be needed to offset projected losses in 2019. Hopefully changes in market conditions or above trendline yields will cause 2019 incomes to look less negative.

Schnitkey, G. “Revenue and Costs for Illinois Grain Crops, Actual for 2012 through 2017, Projected 2018 and 2019.” Department of Agricultural and Consumer Economics, University of Illinois at Urbana-Champaign, September 2018.