Milk production per cow for all herds averaged 22,585 pounds.  The average was 1,374 pounds less per cow than in 2016.  This was the first time since 2011 that pounds of milk per cow has decreased.

Trends in total costs and returns per cow for all herds are given from 2008 to 2017 in Figure 1.  The profit margin (return above all cost) increased— from a negative $437 in 2016 to negative $60 per cow in 2017. The last five-year returns above all costs has averaged a negative $189 per cow.  During this period, returns above all costs per cow have varied from $662 in 2014 to negative $701 in 2013.  In Figure 1, labor and interest charges are included in total costs only.  Most dairy producers will incur hired labor and cash interest expense and would include them as cash operating costs. 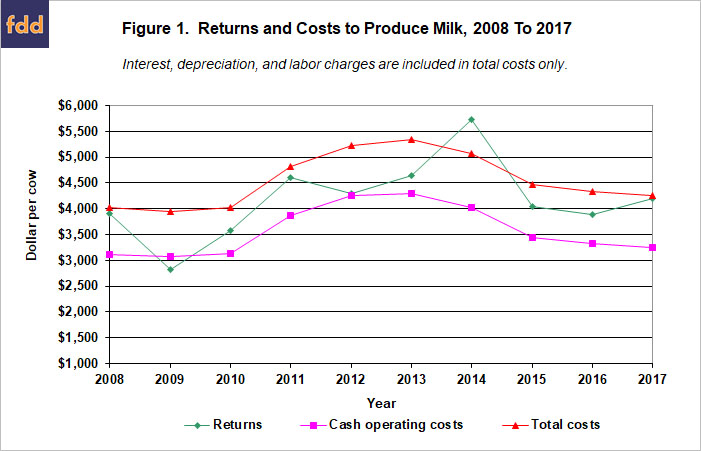 Negative Profit Margins Likely for Dairy Producers in 2018 and 2019

2018 and 2019 milk prices are projected lower than 2017 and will not exceed economic costs resulting in continued negative profit margins for dairy producers.  Lower milk prices will be the main reasons for the decrease in returns.  The average price received for milk in 2017 was 14.3 percent higher than the average in 2016.  The average milk price for 2018 is projected to be about 11 percent less or about $2.10 per hundredweight lower than the average for 2017.  Steady to lower domestic demand, increased production, tariffs, and lower butter prices will lead to lower prices.  United States milk production is expected to increase about 1.01 percent in 2018 even with higher feed costs.  2019 projections from the United States Department of Agriculture show milk production increasing 1.02 percent from 2018 and milk prices increasing 2 percent from 2018 estimates.

The author would like to acknowledge that data used in this study comes from the local Farm Business Farm Management (FBFM) Associations across the State of Illinois.  Without their cooperation, information as comprehensive and accurate as this would not be available for educational purposes.  FBFM, which consists of 5,600 plus farmers and 64 professional field staff, is a not-for-profit organization available to all farm operators in Illinois.  FBFM field staff provide on-farm counsel with computerized recordkeeping, farm financial management, business entity planning and income tax management.  For more information, please contact the State FBFM Office located at the University of Illinois Department of Agricultural and Consumer Economics at 217-333-5511 or visit the FBFM website at www.fbfm.org.