On December 1, 2018, the University of Nebraska Press released a book I have spent the last few years writing, The Fault Lines of Farm Policy: A Legislative and Political History of the Farm Bill.  We await the details of the conference agreement for the 2018 farm bill so as to provide analysis of its programs and provisions.  In the meantime, this article introduces the book and provides some background on its contents; a bit of shameless self-promotion to fill the void, I appreciate the indulgence.

The book traces over 100 years of legislative and political history for American farm and food policies, beginning with the farm economic collapse after World War I.  The farm bill as we know it today is the progeny of President Franklin Roosevelt’s New Deal efforts to combat the Great Depression and, to a lesser extent, the response to the Dust Bowl disasters of the 1930s. 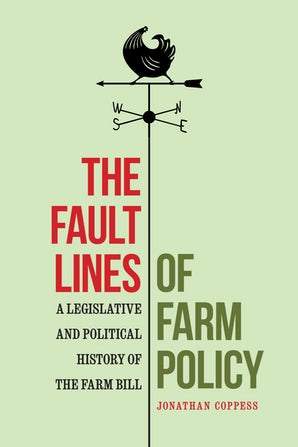 The support system created in the New Deal and built through World War II broke down in the post-war economy under the technological revolution in farming.  The book traces the increasingly difficult politics for farm bills and the numerous attempts to adapt, adjust and revise the policies through the 1960s.  It explains the target price policy created by Congress in the Agriculture and Consumer Protection Act of 1973, which contributed to, and helped some farmers survive, the second farm economic crisis in the 1980s.

The book traces policy development through the end of the target prices in the Federal Agriculture Improvement and Reform Act of 1996, which initiated the modern, decoupled era of farm support policy.  It continues through the Farm Security and Rural Investment Act of 2002 and the Food, Conservation, and Energy Act of 2008.  The book concludes with a chapter on the difficult effort to write, negotiate and pass the Agricultural Act of 2014.  The final chapter reviews the entire history for lessons learned about farm bills, legislation and policymaking, as well as further areas of analysis and exploration; an attempt to place farm bills in the larger perspective of the American system of self-government.

Questions are at the heart of the book; my own questions about the conflicts over farm program designs and the history underlying the farm bill, as well as questions from students, farmers and others interested in farm bill policies.  For example, one of the most common questions is why the food assistance policies (the Supplemental Nutrition Assistance Program (SNAP)) are included in a farm bill and the book explores that history as well.  Research into these questions raised more questions and drove further research, as did the need for material to teach classes on the subject.  The book explores history in attempt to provide answers and perspectives.

Research for the book involved numerous secondary sources, especially previous books on farm bill and policy history (see e.g., Benedict, 1953; Cochrane and Ryan, 1976; Hansen, 1991; Winders, 2009).  The primary resource, however, was an exhaustive review of the legislative histories for each of the farm bills, beginning with the 1933 AAA.  Legislative history includes the debates on the House and Senate floors as recorded in the Congressional Record.  It also includes legislative text and the text of amendments, as well as hearing records before the House and Senate Agriculture Committees.  Finally, it includes review of the contents of various reports, such as those the committees produce for the bills.

Farm bills originated with economic crisis and low prices following World War I, worsened by the Great Depression.  One way to trace the path of the long history of farm policy is through the history of crop prices.  Figure 1 provides a snapshot of the history with the marketing year average (MYA) prices for three of the most prominent commodities, corn, wheat and cotton, as reported by USDA’s National Agricultural Statistics Service (NASS Quickstats).  It also includes the Congressional Budget Office (CBO) forecasts for MYA prices in the April 2018 Baseline (CBO April 2018).  Three of the landmark farm bills are noted on the historical timeline.  Also included is a breakdown of the history into three eras representing parity policy developed during the New Deal, target price policy in the 1970s and 1980s, as well as the decoupled policies of the modern farm bills. 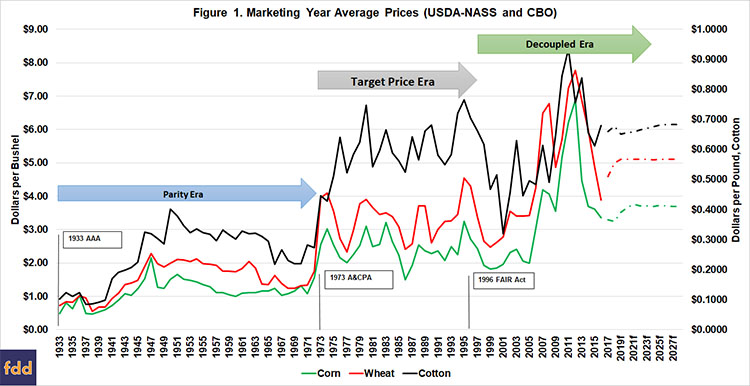 Among the lessons explored in the book is that of building and maintaining legislative coalitions; a fundamental requirement for policies to successfully become bills that can navigate the difficult Congressional process to become enacted into federal law.  Building and maintaining coalitions is difficult; a perpetual work-in-progress under political pressures and procedural constraints.  Policy developments happen where these coalitions come together, along their complicated fault lines.  Exploring these fault lines adds to an understanding of the farm bills.

Farm bills repeatedly demonstrate the necessities of, and problems inherent in, coalition-building.  For example, the primary fault line is the regional coalition among farm interests for corn, cotton and wheat.  That coalition was expanded upon by the challenging alliance with food assistance policy that developed in the 1950s.  In fact, the alliance helped rescue farm policy as it broke down in the 1960s.  The farm bill coalition was further strengthened by an alliance with environmental and conservation interests beginning in the 1980s.

The 2014 Farm Bill provided another strong example.  Budget and politics magnified long-standing pressures on the key fault lines for the farm bill coalition, creating substantial problems and magnifying regional and partisan conflicts.  Regional conflict over farm program design dominated the two debates in the Senate, while partisan conflict over food assistance and spending nearly derailed the entire effort in the House.  The 2014 and 2018 debates also followed a historical pattern for farm bills in which the largest policy changes happen as crop prices are strong, followed by lower prices that challenge the revisions and subsequent bills that largely maintain the existing status quo.

Finally, the book demonstrates that farm bills offer an incredible window into Congress, legislation and policymaking that farm bill history provides.  Since 1933, Congress has reauthorized farm policy more than twenty times.  These legislative debates and efforts cover the complex history of the modern administrative state that was created by the New Deal.  The 2014 and 2018 debates within the long history of farm bills also highlighted the increasing partisan polarization in America and Congress that contributes to dysfunction in the federal government.

As Congress works to complete the latest chapter in farm bill history, that long history and the many iterations of the policies contained within it, have many lessons to offer.  The Fault Lines of Farm Policy is my attempt to catalogue and analyze those lessons.  It is an effort to apply experience and historical research to develop perspectives on, and an understanding of, farm bills, their politics and development.  It also, hopefully, contributes some perspectives on our American system of self-government.

Benedict, Murray R. Farm Policies of the United States, 1790-1950: A Study of Their Origins and Development. New York: The Twentieth Century Fund, 1953.

Coppess, Jonathan. The Fault Lines of Farm Policy: A Legislative and Political History of the Farm Bill.  Lincoln: University of Nebraska Press, 2018.