Pork producers are expected to struggle with hog prices below costs of production through the winter. Record pork production and trade disputes continue to be the near-term drag on prices. However, lean hog futures are more optimistic for spring and summer prices to be high enough to provide profitability in the second and third quarters of 2019. What are the economic factors that are the foundation of this optimism, and will those higher prices actually materialize in 2019?

Trade conflicts have directly affected the U.S. pork industry. Trade disputes have limited U.S. pork sales in China and Mexico beginning last summer. Pork export volume to China is down 19 percent for this calendar year and most of the decrease has been since the summer when Chinese tariffs on U.S. pork were put in place. Sales to Mexico also have decreased relative to the same months a year-ago. However, year-to-date sales to Mexico are still up two percent.

The overall trade picture looks more optimistic when viewed in a global perspective for multiple reasons. First, total pork exports to all destinations are up six percent. In addition pork sales commitments through the week of November 22 are also up six percent, and USDA analyst are using a six percent increase for their 2018 annual estimate. Second, the signing of the USMCA calms trade conflicts with Mexico and Canada. That trade agreement still needs approval in each country. In addition, it leaves in place the U.S. tariffs on steel and aluminum. It was these tariffs that caused Mexico and Canada to place restrictions on U.S. pork. Those tariffs still need to come off. Third, hope for a cooling of the trade conflicts with China are potentially supportive to hog prices. Fourth, African Swine Fever in China is not under control and China may import more pork and other meat products to compensate for lost hogs due to the disease.

The lean hog futures market seems to exhibit more bullish enthusiasm by spring of 2019 even in the face of potential record pork production. It is a reasonable conclusion to assume traders’ optimism is based on strong demand from a continuing strong world economy, by anticipation of resolution to trade disputes, and perhaps by African Swine Fever in China increasing global pork sales.

The futures price premiums for mid-2019 are extremely high compared to nearby futures. This would seem to indicate that traders expect some major economic factors to increase hog prices by spring and summer. As an example, the July 2019 lean hog futures, near $84 on November 30, are about $26 higher than the nearby December 2018.

Hog prices and lean hog futures tend to peak in the late-spring and summer. The $84 level on July 2019 futures is among the highest levels for summer futures in several years. In the summers of 2015, 2016, and 2017 lean hog futures were generally trading in the $80 to $84 range (2016 was an exception when July futures briefly reached $90). Last summer (2018) summer futures only reached $80 as trade concerns set in and futures soon plummeted.

Using lean hog futures as a base, what are hog price prospects for 51% to 52% lean carcasses on a liveweight basis? Hog prices were depressed in the third quarter of 2018 due to trade issues and averaged just $44. The outlook is for a similar price average for the fourth quarter this year. Winter prices are expected to strengthen into the mid-to upper $40s. With the current optimism in futures markets, prices could move to the mid-$50s for averages in the second and third quarters. The final quarter of 2019 could then see prices drop back to the mid-$40s.

My estimated total costs of production is around $50 currently and that may go up to $51 in 2019 with higher corn prices and higher labor, interest, and building costs. Given current optimism in the lean hog futures for 2019, prices for the year would average near $50 compared to near $46 in 2018. That means 2019 would be a year near breakeven for farrow-to-finish producers. Losses would be the norm in the first and the fourth quarter with profits in the second and third quarter roughly offsetting.

In 2018, trade disputes damaged hog producers prices contributing to an estimated $12 per head of losses. Futures markets remain more optimistic that pork trade differences will be reduced or settled in 2019 with the potential for stronger prices.

The bottom line is that the U.S. industry will be producing record pork supplies in 2019 and will need more open export markets and strong demand support. If not, another year of losses might result. 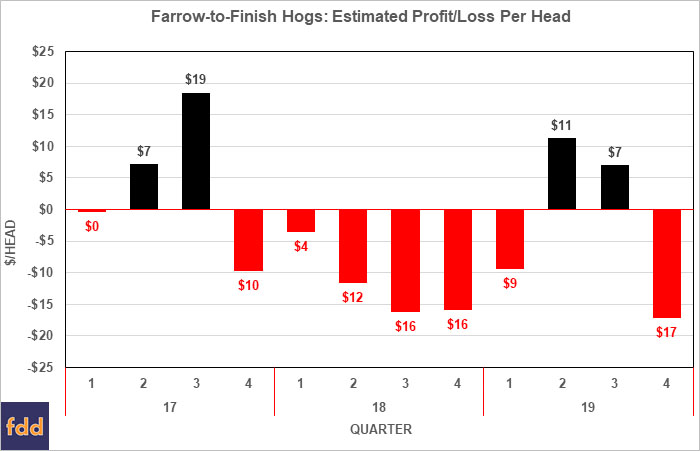