A World Trade Organization (WTO) dispute panel circulated its report on February 28, 2019 concerning a widely-watched case brought against China’s market price support for wheat, rice and corn during 2012-15 (WTO, 2019). The U.S. initiated the dispute in September 2016 claiming that China’s support for each grain exceeded the level allowed by its commitment under the WTO Agreement on Agriculture in each of the four years. The panel determined that China exceeded its limits for wheat and rice each year by an average of 127.7 billion yuan (US$ 20.6 billion) but it did not make an assessment for corn. This article summarizes the issues and panel conclusions as well as assesses implications for China’s continued support for these grains.

U.S. and other grain exporters have been concerned that since 2011 China’s support programs have kept its producer prices above international prices (see Figure 1). Economic price support at the farm level averaged 32% of the value of production at domestic prices for wheat, 32% for rice, and 23% for corn during 2012-15 (OECD, 2018). The support prices provide a floor under China’s producer prices and thus provide incentives for China to produce more than it would at the lower international prices. 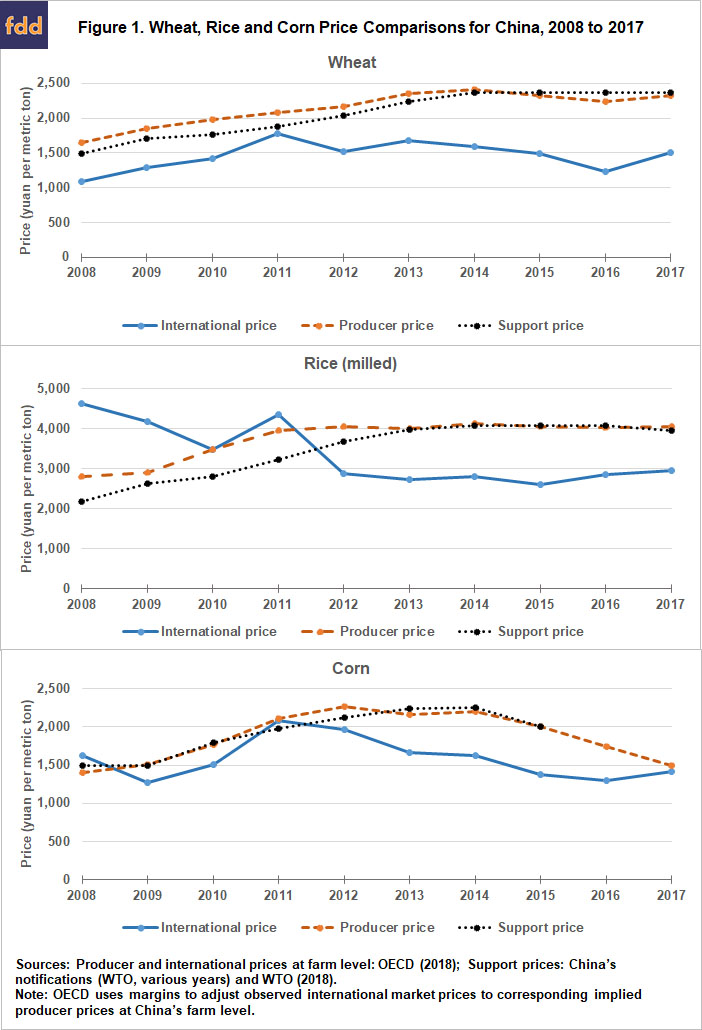 The WTO Dispute Settlement Body established a panel for the dispute, titled China – Domestic Support for Agricultural Producers (DS511), on January 25, 2017. Twenty-seven other WTO members reserved their third-party right to participate in the dispute, indicating the large interest in the case. Three panelists, agreed by the U.S. and China, were appointed on June 24, 2017. The parties presented their arguments in writing and orally to the panel, which issued its report to the U.S. and China in late 2018 before making it public in 2019.

When China acceded to the WTO in 2001, some of its domestic support became subject to rules that apply to WTO Aggregate Measurements of Support (AMSs). A product’s AMS consists of market price support (MPS) as measured under the Agreement on Agriculture plus certain producer payments and input subsidies linked to production. The commitment negotiated in its WTO accession requires China not to exceed an annual limit on each individual product’s AMS of 8.5% of its value of production at China’s domestic prices.

The dispute concerns only MPS for producers of wheat, rice (Indica and Japonica) and corn in 2012-15 as measured under the Agreement on Agriculture. The MPS for each product uses the gap between the current year’s “applied administered price”, which is the country’s policy-determined support price, and a “fixed external reference price”, which is a constant in the WTO measurement. This annual price gap is multiplied by the “quantity of production eligible to receive the applied administered price” (eligible production) to determine the nominal value of MPS. The product’s nominal MPS is divided by its value of production to determine its percentage MPS. The panel examined three important measurement issues.

First, the U.S. argued that China’s eligible production of wheat, rice and corn, respectively, was production in the provinces and regions where the support programs operated. For wheat and rice this covered nearly 80% of national production and for corn about 45% during 2012-15. In contrast, China used the smaller quantities purchased by the government under the support programs, which is the same measurement approach it had used in its WTO accession.

Third, the parties agreed that the applied administered price and fixed external reference price for rice must be assessed at the same level of processing, in contrast to some past reporting by China that used an applied administered price for unmilled rice but a fixed external reference price for milled rice (a higher-priced processed product). The U.S. and China disagreed on whether to measure MPS for unmilled or for milled rice and on the appropriate conversion factor.

The different interpretations resulted in vastly different AMSs. The U.S. held that China’s MPSs exceeded its summed AMS limits for wheat, rice and corn by an average of 604 billion yuan (US$ 97 billion) per year during 2012-15. China claimed it was within its wheat and rice limits and did not calculate corn AMSs. China argued it had terminated the corn price support program in March 2016 and thus evaluation of AMSs for corn in 2012-15 was outside the panel’s terms of reference. This argument became a fourth issue in the dispute.

Panel Agreed with the U.S. on Some Issues; with China on Others

If neither the U.S. nor China appeals the report, it will be adopted within 60 days of public circulation.

Each WTO member must inform the WTO Committee on Agriculture of its annual support for agricultural producers as measured under the WTO rules. While these “notifications” help members to review each other’s status in implementing their WTO commitments, they do not carry the weight of WTO dispute settlement as a legal determination of how to interpret the rules. On December 11, 2018 China belatedly submitted notifications for calendar years 2011-16 which include the years in dispute.

China notified that its AMSs included input subsidies to purchase improved crop strains and seeds by producers of wheat, rice and corn, which count toward the AMS limits of 8.5% of value of production and effectively reduce the room for MPS within the limits. In 2015, for example, these subsidies ranged from 1.5% of the notified value of wheat production, to 1.3% for rice and 1.7% for corn. The U.S. dispute claim and therefore the panel’s evaluation of China’s AMSs included only MPSs and no subsidies.

China’s notified rice MPS calculations for 2011-16 use fixed external reference prices from 1996-98 and the 0.7 unmilled-to-milled conversion factor, in line with the panel ruling. However, for both wheat and rice China uses much smaller quantities than the dispute panel as eligible production. China’s notified wheat and rice AMSs, which included the input subsidies and the MPSs, were below their 8.5% limits in 2011-16.

For corn China notified AMSs that exceeded their limits in 2013-16. The corn AMS for 2015 was 25.0% of the notified value of corn production. It remained 13.2% in 2016 due to government purchases made for the 2015 crop year. China exempted new payments to corn producers introduced in 2016 (39.0 billion yuan; US$ 5.9 billion) from the AMS, claiming they are so called “blue box” payments based on fixed area and yields under production-limiting programs.

Implications of Panel Findings and Recommendations

The dispute panel findings and recommendations have important implications. To explain three key points, Figure 2 and Appendix Table 2 illustrate for wheat the effects on MPS percentages of alternative arguments regarding eligible production and the fixed external reference price (for brevity, the similar implications applying to rice are not presented here). The top part of the appendix table provides background information for the analysis. Figure 2 illustrates the key results in Appendix Table 2 using averages for 2012-15 under the alternative arguments. In the figure and table, the limits on MPS take into account the subsidies notified by China in AMS. 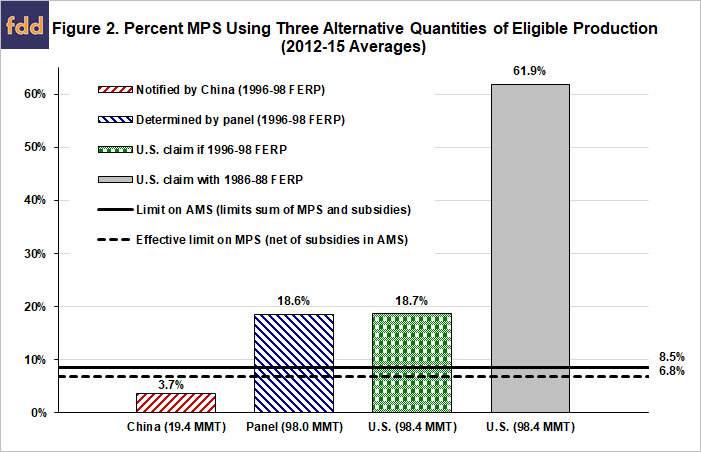 First, the panel’s view that eligible production is based on production and not on government purchases would have required support prices (applied administered prices) to be lower in order to make MPSs small enough to fit within China’s AMS limits. Comparing the height of the second column in Figure 2 to the AMS limits demonstrates this. Annually, with the panel’s eligible production the MPSs are between 12.1% and 22.4% (row c in the table), which is well above the AMS limits (row a). Recently, China lowered the support prices for wheat and various kinds of rice, with the reductions ranging between 2% and 13% in 2018 and a further reduction for wheat of 3% in 2019. China has thus already begun bringing its wheat and rice support prices into line with the panel ruling.

Third, the panel left open the possibility that a cap on purchases at the support price included in the legal framework of a program may define the eligible production under the Agreement on Agriculture. This is significant because it could enable a government to manage the combination of eligible production and support price such that AMS stays within each year’s limit. China’s maximum quantities of eligible production within its AMS limits using 1996-98 fixed external reference price and accounting for the input subsidies averaged 37.3 million metric tons during 2012-15 (Appendix Table 2, row a). China’s notified purchases of wheat at support prices averaged 19.4 million metric tons (row b), with the resulting MPS less than the AMS limits, as shown by the first column of Figure 2. Thus, given its support purchases China potentially could have been WTO compliant during 2012-15 without needing to reduce support prices by including in its legal framework numerical limits, or rules to generate limits, such that the quantities of eligible production were less than the quantities at which those limits are reached.

The panel did not evaluate corn MPS during 2012-15 because, after concluding that corn price support had expired, it considered whether a ruling on corn MPS was nevertheless required in the dispute but found this was not so. The significant drop in producer prices of corn in China in 2016 helped the panel reach its conclusions. Less price distortion in China’s corn market aligns with the U.S. objectives in bringing the dispute. Combining this with China’s claimed exemption of corn payments as meeting the criteria of the blue box will make corn AMS smaller than its limit in 2017 and beyond.

The contrast between China’s lower internal prices for corn, with payments initiated in 2016 that are similar to U.S. deficiency payments from the 1980s until 1996, versus the continued price support for wheat and rice, similar to U.S. loan rate policies in the 1950s and 1960s, underscores an important point. Exports of wheat or rice acquired at high prices in China would require export subsidization, which WTO rules prohibit. Thus, China’s government mostly absorbs the costs of stock accumulation and internal disposal when market demand is less than supply at the high supported prices. The elimination of corn price support in 2016 responded to such pressures.

If China finds a way to keep domestic prices for grains above corresponding world price levels while meeting its AMS obligations, then U.S. and other exporters will have a keen interest in China providing the low-tariff access opportunities that it agreed to in its WTO accession commitments on tariff rate quotas. In a second WTO dispute (China – Tariff Rate Quotas for Certain Agricultural Products, DS517) the U.S. claims that China does not administer those quotas in accordance with its WTO obligations. One effect of this alleged infraction is argued to be restricted imports of wheat, rice and corn. The outcome of that dispute (also expected in 2019) will help determine exporters’ market access opportunities if China maintains domestic prices above international prices. 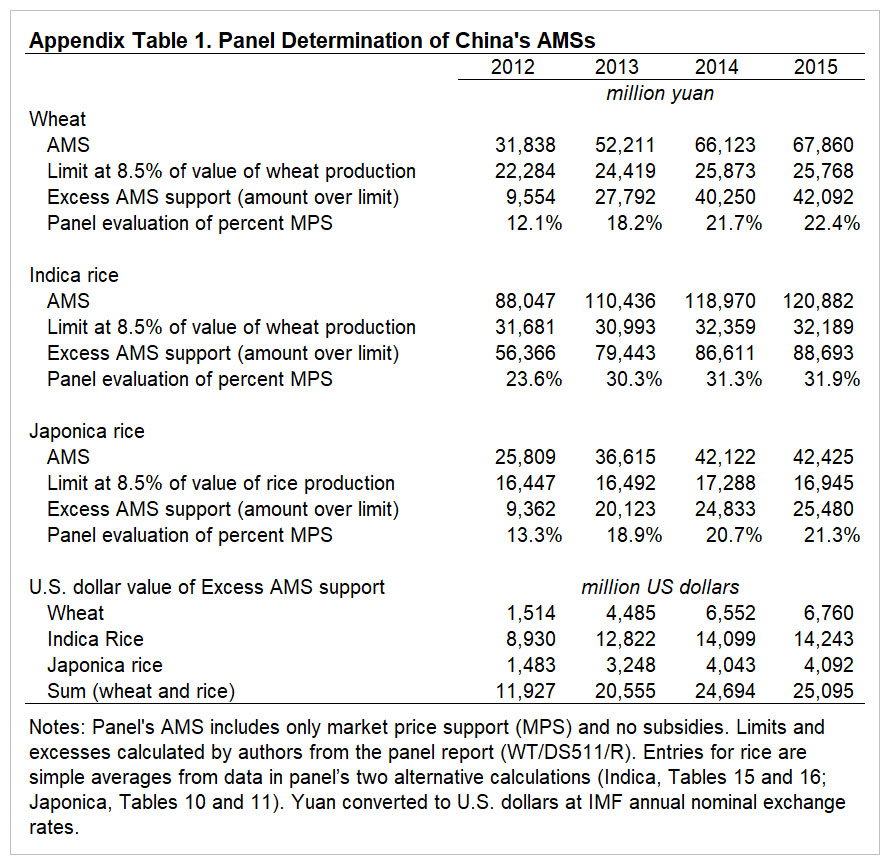 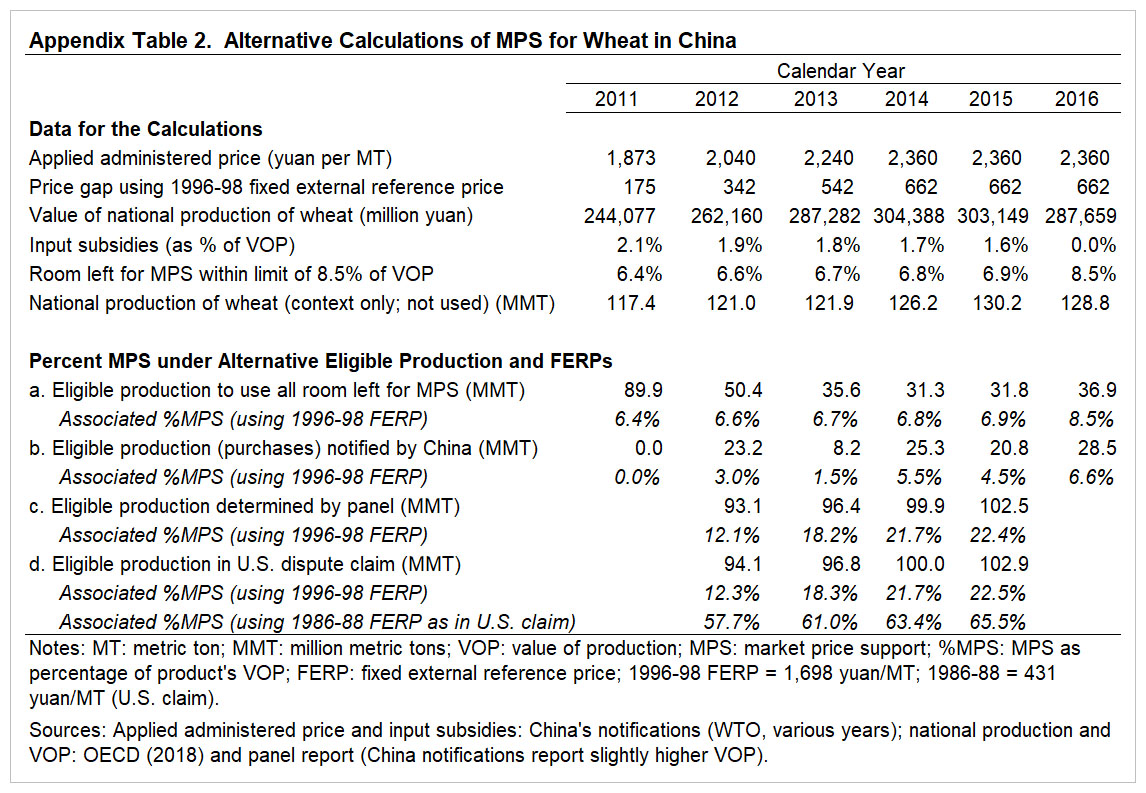