The vast majority of domestic demand for ethanol in the U.S. is in the form of E10 gasoline blends.  For example, implied domestic consumption of ethanol in 2018 was 14.4 billion gallons, of which all but a few hundred million gallons was in the form of E10.  While there is much discussion (and controversy) about the potential for expansion of higher ethanol blends, such as E15 and E85, the bulk of domestic ethanol consumption in the future is likely to continue to be in the form of E10, as the evidence is clear that ethanol is a price competitive blending component in E10 (e.g., farmdoc daily, April 4, 2019).  Assuming gasoline blends remain near 10 percent ethanol, this means that growth in domestic ethanol use is directly tied to growth in the overall consumption of gasoline.  The purpose of this article is to analyze recent trends in U.S. gasoline consumption and consider the implications for domestic ethanol use in the future.

We follow this earlier farmdoc daily article (June 10, 2016) and decompose total gasoline consumption into its two principal components in order to analyze recent trends.  Specifically, we use the following relationship to understand the drivers of consumption: 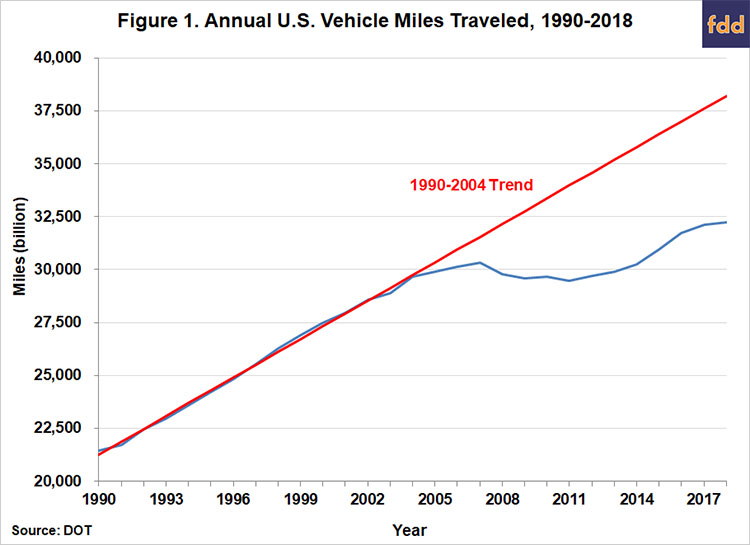 Figure 2 plots the second component of gasoline consumption, miles per gallon (MPG), over 1990-2018.  It should be noted that the MPG series shown in Figure 2 is actually implied by dividing VMT by total gasoline consumption.  This is because aggregate data for the U.S. is only available for VMT and total gasoline consumption.  Computed in this manner, the fleet average MPG showed modest but steady gains of about 0.1 MPG from 1992 through 2010.  Then, under the pressure of rising real crude oil prices and some policy incentives (“cash for clunkers”), U.S. consumers began buying more fuel efficient vehicles and MPG took a substantial jump, reaching a peak of 22.2 MPG in 2012.  This was followed by a period of basically flat fuel efficiency through 2016 and then another jump to 22.5 MPG and higher in 2017 and 2018. 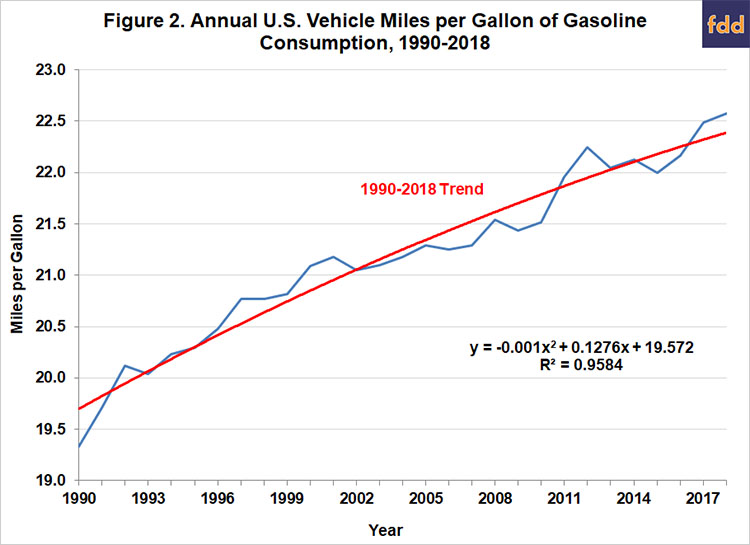 Additional perspective on fleet fuel efficiency is presented in Figure 3, which shows the monthly weighted-average fuel efficiency of new vehicle sales in the U.S. from October 2007 through December 2017, the latest available data from the Transportation Institute of the University of Michigan and available here. These data are interesting because they are based on detailed data on new cars and light-duty trucks purchased by U.S. drivers.  Clearly, U.S. drivers responded to the dramatic fall in real crude oil prices that started in 2014 by not only driving more but also by shifting vehicle purchases towards less fuel efficient models.  Figure 3 shows there was a sharp break in the weighted-average fuel efficiency of new vehicles starting in September 2014, when crude oil prices began their period of most rapid descent.  This change in purchasing behavior has had a major impact on average new vehicle fuel efficiency.  If U.S. drivers had continued on the same trend established over October 2007 through August 2014, the weighted average fuel efficiency in December 2017 would have been almost 33.9 MPG instead of 31.1 MPG. 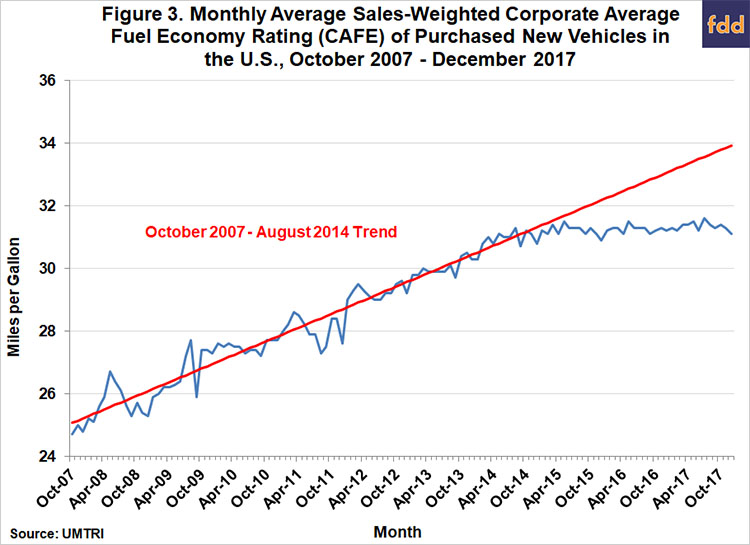 For most of the period where the data in Figures 2 and 3 overlap, the trends are largely consistent.  However, the last couple of years present a puzzle.  The (implied) fleet average MPG ticked up in 2017 and 2018 despite the fact that the fuel efficiency of new vehicles was flat (assuming no gains in fuel efficiency for new vehicles in 2018).  One explanation is that the fleet average MPG is noisy because it is implied based on data that is generated in two completely separate government surveys.  The uptick in 2017-2018 may simply be statistical blip that will not be sustained based on this reasoning.  The other explanation is that, for some reason, the older vehicles that are being scrapped from the fleet are less fuel efficient than the vehicles scrapped in earlier periods.  While this is a logical possibility it does not seem very plausible.  In sum, there is not an obvious explanation for the divergence in the two series the last couple of years. 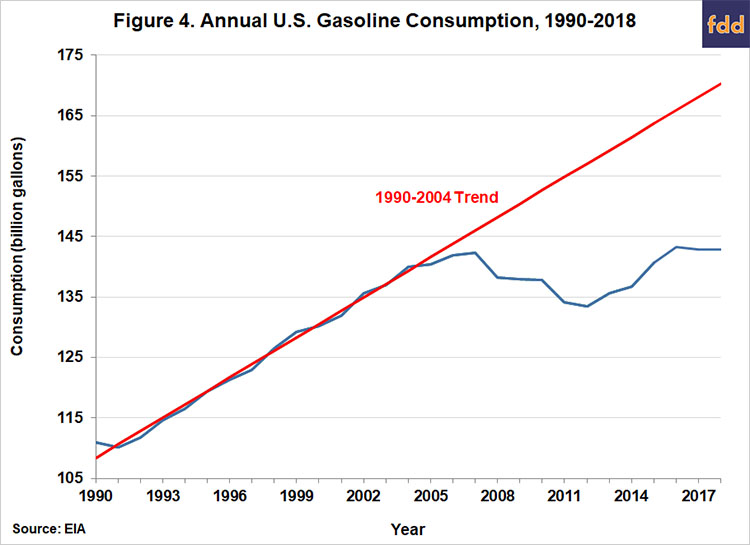 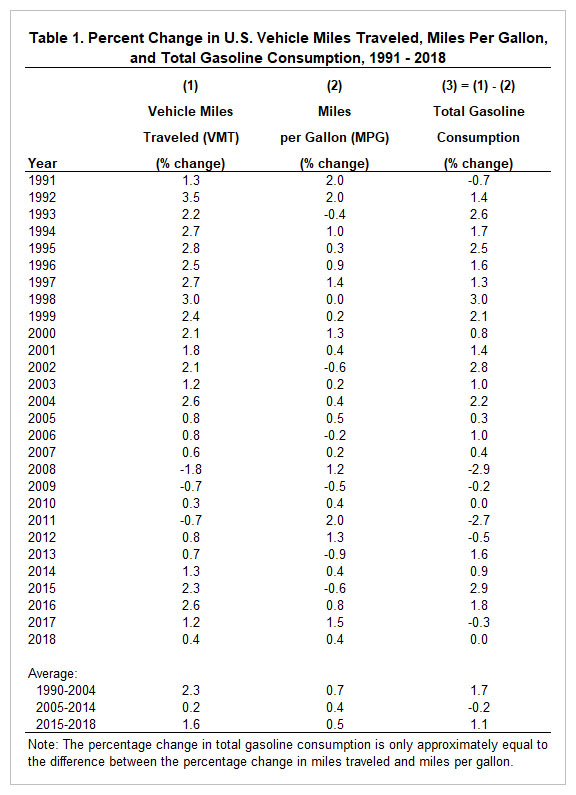 Looking forward from the perspective of ethanol demand, the most concerning result of this analysis is the flattening of growth in gasoline consumption since 2017.  This is especially concerning in light of how low real crude oil and gasoline prices have been in the last two years.  Figures 5 and 6 show the real annual average spot prices of WTI crude oil over 1990-2018 and the real annual average retail price of gasoline in the U.S. (all grades), respectively.  The crude oil and gasoline price series are collected by the EIA and found here.  Real prices are computed by dividing nominal prices by the U.S. Consumer Price Index (CPI) for all urban consumers, which can be found here and here.  The base for the CPI is 1982-1984=100, which means that computed real prices are stated in terms of average prices over the 1982-1984 period.  Another way of saying the same thing is that prices are adjusted to a constant purchasing power in terms of 1982-1984 dollars.  It is important to note that a different base period will result in different computed real prices. 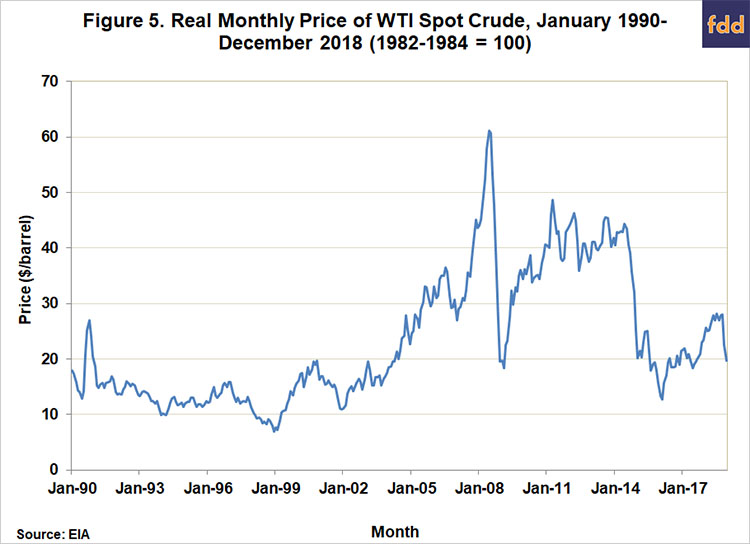 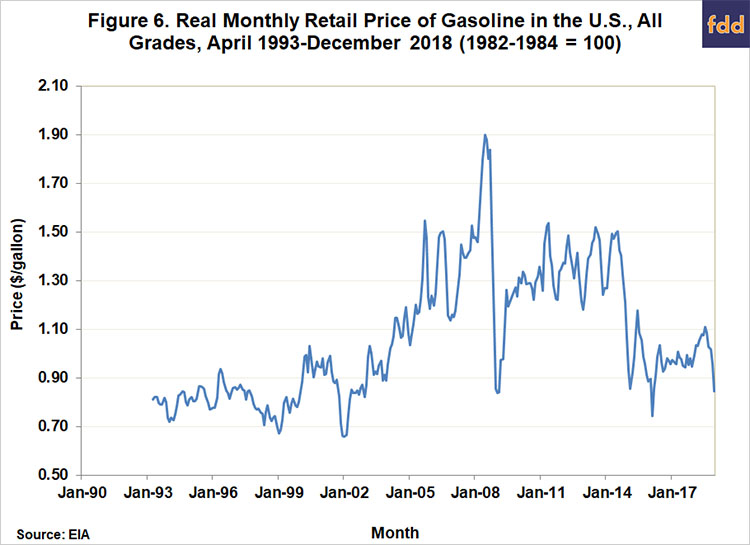 As shown in Figure 5, real crude oil prices fluctuated in a relatively narrow range from about $10 to $20 per barrel over 1990 through 2004.  From this point forward, the real price of crude rose spectacularly, reaching a peak of $61 in 2008.  The Great Recession of 2008-2009 saw the real price fall back to $20, snap back quickly during 2010, and then trade in a range of about $40 to $50 over 2011 through 2014.  Since then, real crude prices have fluctuated between about $20 and $30, with prices spending most of the time around $20.  Figure 6 shows the real price of gasoline in the U.S., and not surprisingly, the pattern is very similar to that of crude oil.  The key takeaway is that real gasoline prices in the last two years have averaged $1 per gallon, pretty much the same level of real prices as in the late 1990s and early 2000s.

The implication of the data on real crude oil and gasoline prices is that the underlying fundamentals are strong for growth in U.S. gasoline consumption.  In addition to low real prices, U.S. economic growth the last two years has been the strongest in the last decade.  The flatlining of U.S. gasoline consumption the last two years suggests other factors are offsetting the positive impact provided by low real gasoline prices and strong economic growth.  There is no conclusive single answer but a variety of factors have been suggested: i) increasing Federal CAFE fuel efficiency standards, ii) the explosion in the growth of ride-sharing such as Uber and Lyft, iii) the impact of social media, especially on young drivers, and iv) growth in the use of electrical vehicles.  Regardless of the correct explanation, it may be the case that the flatlining of U.S. gasoline consumption in 2017 and 2018 is an early warning sign of a long-term systemic decline in gasoline demand that is just beginning.  As shown in Figure 7, this is built into the latest AEO long-term projections of U.S. gasoline consumption from EIA, which turn down sharply starting in 2020.  By 2030, the EIA baseline projection of gasoline consumption is only 116.9 billion gallons, a decline of 26.1 billion gallons or 18.2 percent from the current projection of consumption in 2019. 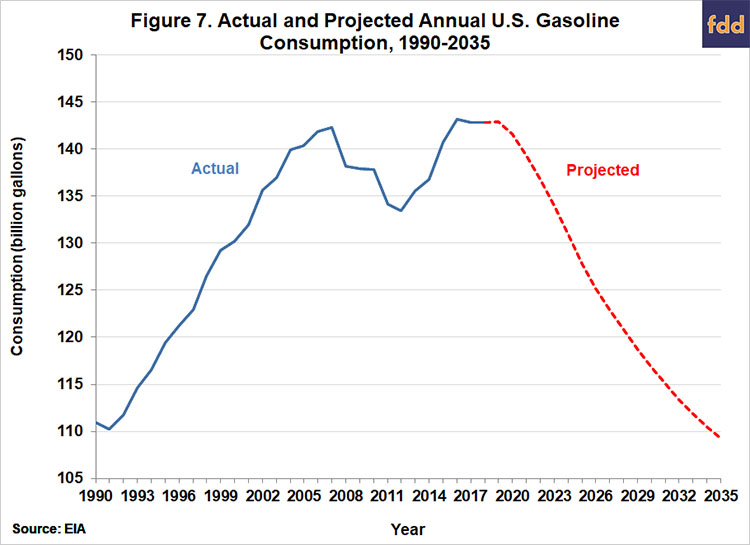 Irwin, S. and D. Good. "U.S. Gasoline Consumption: Where to From Here?" farmdoc daily (6):110, Department of Agricultural and Consumer Economics, University of Illinois at Urbana-Champaign, June 10, 2016.