Wet conditions in much of the Corn Belt continue to hamper corn planting progress this spring.  The USDA’s most recent weekly Crop Progress report indicated that only 15 percent of the corn acreage in 18 major producing states was planted as of April 28, compared to a five-year average of 25 percent.  These conditions naturally lead to concerns that more than the average percentage of U.S. corn acreage will be planted late.  In our farmdoc daily article last week (April 24, 2019), we concluded that recent wet topsoil conditions in the Corn Belt did not bode well for planting the entire U.S. corn crop in a timely manner, despite the fact that nearly a month remained until the cutoff for late planting (May 20).  We argued that a conservative estimate of late corn planting in 2019 was at least 5 to 10 percent above average.  The purpose of this article is estimate the implications of projected late planting for the 2019 U.S. average corn yield.

We begin by reviewing the estimates of late planting for corn presented in last week’s farmdoc daily article.  Figure 1 shows the percentage of corn planted late in the U.S. over 1980-2018 based on a May 30 cutoff from 1980 through 1985 and a May 20 cutoff date from 1986-2018.  The change in cutoff dates in the mid-1980s reflects recommendations for earlier planting that appeared around that time.  On average, late planting based on this measure was 16.8 percent, with the bulk of the observations between about 5 and 25 percent.  There is no evidence of a trend up or down over time in the late planting percentage, which suggests that producer behavior in aggregate with respect to late corn planting has been quite stable.   The amount of late planting does vary substantially from year-to-year, ranging from a low of 2.9 percent in 1986 to a high of 46.9 percent in 1995. 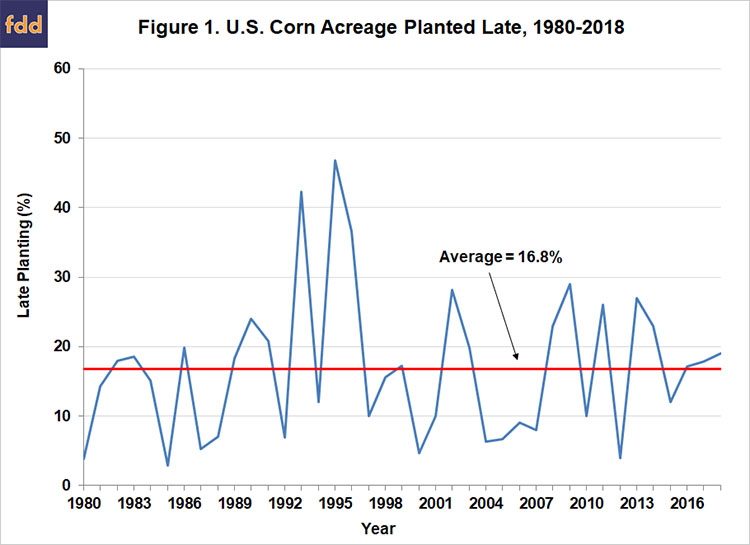 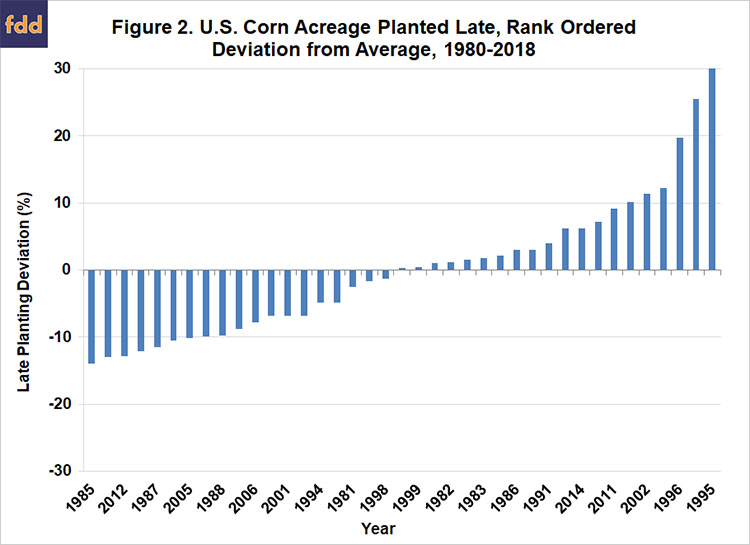 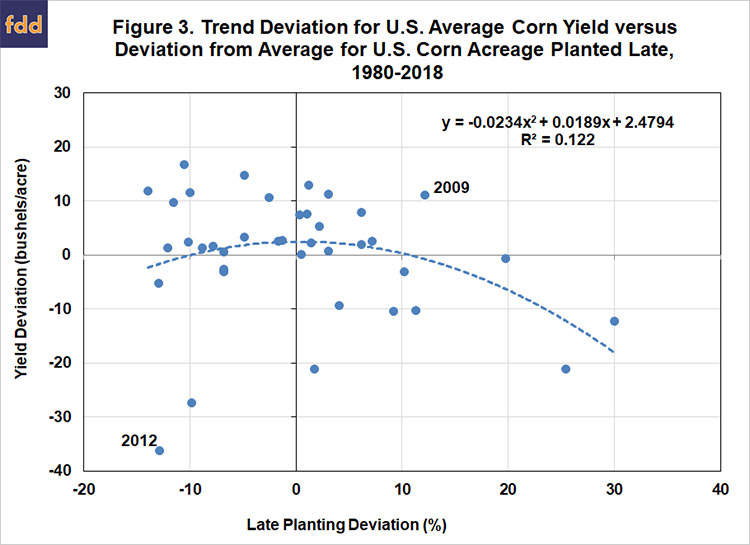 It is important to emphasize that the explanatory power of the regression model in Figure 3 is quite low, as the R2 is only 12.2 percent.  This does not mean that late planting should be ignored when projecting corn yield, but rather, other factors, in particular summer weather, are typically more important in explaining deviations from trend yield (e.g., Nielsen, 2015).  Two years provide good examples.  Late planting was well above average in 2009 but the corn yield was a record at the time due to a cool, wet summer.  Conversely, late planting in 2012 was at the low end of the sample range but corn yield was extremely low relative to trend due to the severe drought that summer.

The previous results suggest that the key issue for projecting the 2019 U.S. average corn yield at this point in the season is whether late planting will be 10 percent or more above average.  In our farmdoc daily article last week (April 24, 2019), we found that when the topsoil moisture surplus in the Corn Belt is 30 percent or more on April 22 that late corn planting in the U.S. averaged 26.4 percent, or 9.6 percentage points higher than average.  In Figure 4, we provide further perspective by plotting weekly values of topsoil moisture surplus in the Corn Belt during April (weeks #13 – #17) and May (weeks #18 – #22) for 2019 to date and the three years since 1995 that had the largest amount of late planting.  We do not include 1993 because data for the Corn Belt topsoil moisture surplus measure is only available starting in 1995. The figure shows that 2019 to date has been wetter than 1995, 1996, and 2009 with one exception (2009 in the most recent week).  Heavy rains this week almost certainly will increase topsoil surplus, and if current weather forecasts verify, will likely continue to increase the next two weeks.  Note that 1995 and 1996 had drier Aprils than in 2019 and then experienced very wet Mays. The pattern for 2009 is similar except that wetness diminished considerably in the second half of May.  Right now, 2019 appears headed for both a very wet April and a wet May, something that has not happened in the last 25 years, and this means that there is a low probability of having the number of suitable field days needed to plant the corn crop in a timely fashion before May 20th (see the farmdoc daily articles on April 17, 2019 and April 24, 2019 for further details on this type of calculation). 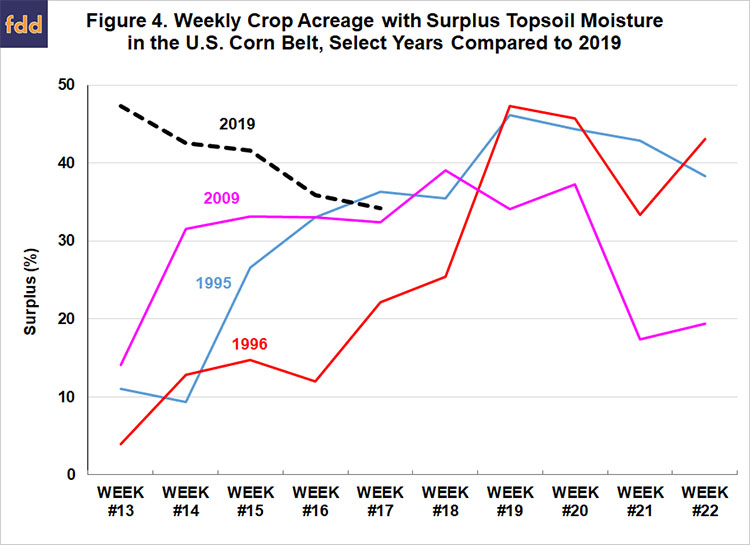 The impact of late planting on projections of the U.S. average corn yield is an important question right now due to the very wet conditions so far this spring through much of the Corn Belt.  We estimate that the relationship of late planting with corn yield trend deviations is highly non-linear, with a largely flat segment up to 10 percent above average late planting and then a steeply sloped segment for late planting that is 10 percent or more above average.  This nicely matches the curvature of planting date effects on corn yield estimated in agronomic field trials (e.g., farmdoc daily, May 20, 2015; Nafziger, 2017).  The key then for 2019 is whether late corn planting will be 10 percent or more above average, where the negative impact on corn yield is relatively large.  Specifically, when late planting is 10 percent or more above average the chance of corn yield being below trend is 83 percent and the average deviation from trend yield is -6.1 bushels per acre.  We analyze topsoil surplus moisture patterns in analog years to 2019 and the analysis suggests late planting this year is likely to be at least 10 percent.  The implication is that there is a significantly elevated probability of a below-trend corn yield in 2019 and that present projections of U.S. average corn yield should likely be reduced to 170 bushels per acre or less.  It is important to recognize that good summer weather conditions can offset the projected negative impact of late planting on the national average corn yield, but history indicates the probability of this happening is not very high if wet conditions in the Corn Belt persist through mid-May.

Irwin, S. and T. Hubbs. "Here We Go Again: How Many Days Does It Take to Plant the U.S. Corn Crop?." farmdoc daily (9):69, Department of Agricultural and Consumer Economics, University of Illinois at Urbana-Champaign, April 17, 2019.

Nafziger, E. “Planting Date for Corn and Soybeans in Illinois.” The Bulletin, Department of Crop Science, University of Illinois at Urbana-Champaign, March 23, 2017.  http://bulletin.ipm.illinois.edu/?p=3848