Corn price futures for the December 2019 contract increased from $3.79 per bushel for the week ending May 10 to $4.55 for the week ending June 28.  Even though corn futures prices weakened after the release of the June crop acreage report, using the iFarm price distribution tool (here) there was still a 19 percent chance on July 9 that corn futures will be above $5.00 per bushel.  Moreover, due to continued questions related to U.S. corn acreage in 2019, there is tremendous uncertainty regarding corn prices during the rest of the year.  To address this uncertainty, this article examines the impact of potentially higher corn prices on feed cost indices for a swine finishing enterprise.

The swine finishing enterprise assumes the finishing of an early-weaned pig.  The ration for this enterprise consists of corn, soybean meal, dry distillers’ grain, and supplements.  Corn prices represent averages for Indiana as reported by USDA-NASS.  Soybean meal and distillers’ grain prices are obtained from Feed Outlook, published monthly by USDA-ERS.  Information from Agricultural Prices, a monthly USDA-NASS publication, was used to compute supplement prices.  Future prices for corn and soybean meal are used to project feed indices through 2019.  Feed cost indices are reported on a closeout month rather than a placement month basis. 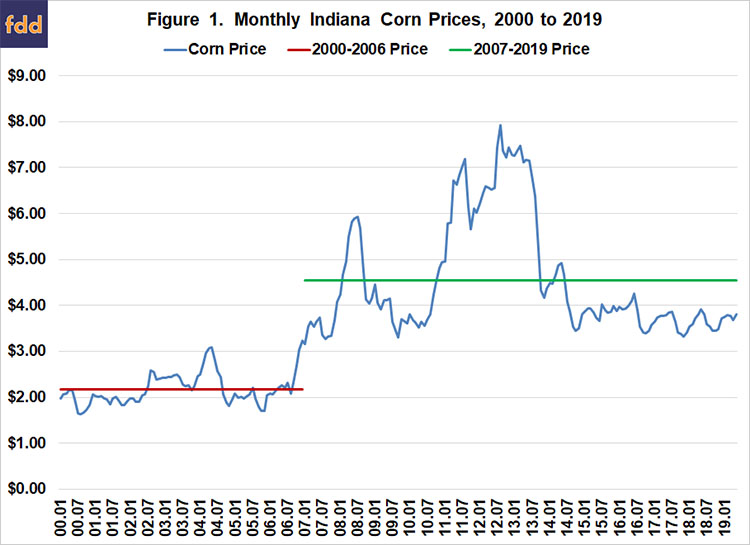 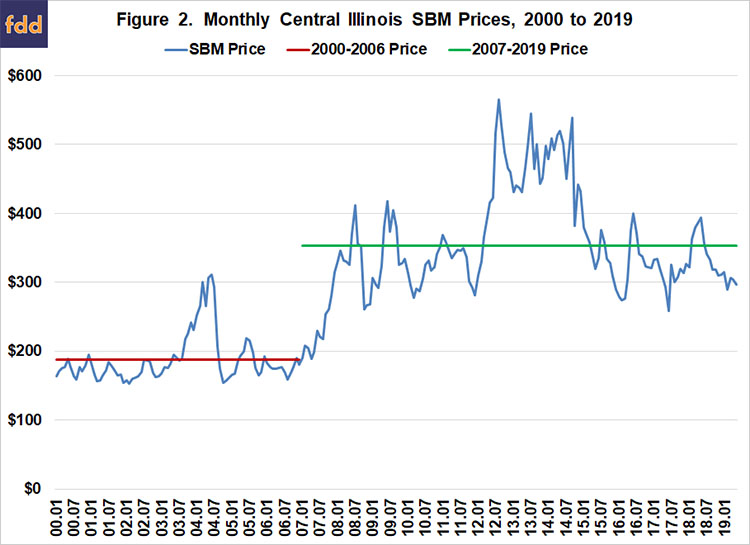 Figure 3 illustrates monthly swine finishing feed cost indices for the January 2000 to May 2019 period.  The latest full year of indices, 2018, has an index of 100 so all indices outside of this year are expressed in relative terms.  As with corn and soybean meal prices, a distinction is made between the before and after 2007 periods.  The average index for the 2000 to 2006 period was 57 while the average index for the period beginning in 2007 was 112.  The index for May 2019 was 100, so current feed costs are similar to those experienced in 2018. 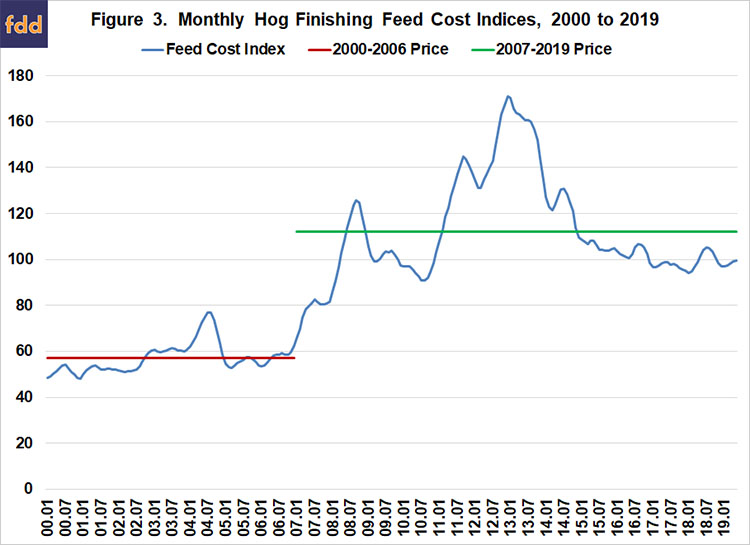 Annual swine finishing feed cost indices are presented in figure 4.  The projections for 2019 (red bar) used corn and soybean meal futures prices in early July.  The projected feed cost indices for 2019 is 101.  This indicates that with current price projections, feed costs in 2019 will be similar to those experienced in 2018.  However, given the uncertainty regarding corn acreage, corn prices could potentially be higher than current projections.  The impact of a potential spike in corn prices is discussed below. 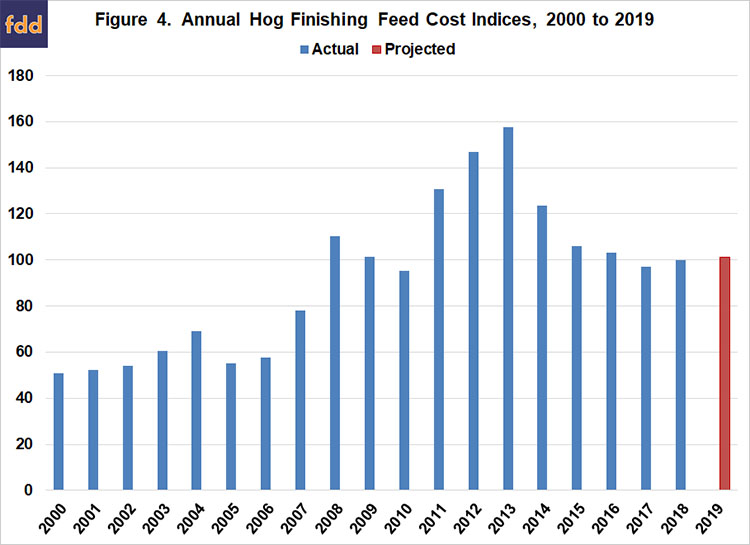 This article provided projections of feed cost indices and feed cost per cwt. for a swine finishing enterprise.  With current projections feed costs are expected to increase from $1 to $2 per cwt. in the third quarter and from $2 to $3 per cwt. in the fourth quarter.  These increases in feed costs represent percentage changes of 2 to 9 percent.  If corn prices spike to $5.00 per bushel, feed costs could increase 16 to 21 percent.