Diversified grain and livestock farms were once the model of U.S. agriculture. Farms often had crop and animal enterprises to help capture their complementary nature such as spreading the use of family labor throughout the year and recycling animal waste as nutrients to the crop enterprise.

Today, farms are much more specialized in crops or animals, and many fewer are in both. Has this changed the relative economic importance of crop and animal agriculture in the U.S.?

Why Specialize in Crops OR Animals?

Over the long run, the movement to industrialization in animal agriculture has also favored specialization. Egg and chicken production tended to leave the family farm in the 1950’s and was largely replaced by specialized, industrial scale, integrated production units. Cattle feedlots moved from primarily small-scale family farms to large commercial feedlots in the 1960’s and early 1970’s. The 1970’s saw hog production move out of pasture systems and into more highly capital intensive indoor confinement facilities. The grain export boom of the 1970’s encouraged many farm families to specialize in crop production and drop animal enterprises. In more recent decades pork production and milk production have also moved sharply toward the more specialized industrial model.

So, is the crop sector or the animal sector economically bigger today? Data are drawn from the USDA Farm Income and Wealth Statistics at the Economic Research Service where analyst estimate the farm level value of crop and animal production, by state, and for the U.S. As shown in Figure 1, the value of production for the crop and animal sectors have made roughly the same economic contributions dating back to 1990.

Those events increased the demand for grains and oilseeds, thus increasing grain and oilseed prices and immediately increasing revenues from crops. But there is a lagged impact on the value of animal production. Rising feed prices cannot be immediately passed to consumers. Instead, there is a multiple year process of adjusting animal production down to a level where the prices in the animal sector increase sufficiently to cover the higher feed costs. This period of adjustment can be seen by the rising value of animal production from 2009 to 2013.

Since 2016, the long-term relationship of the value of crop and animal production being of roughly the same size has returned. The bottom line is that the economic size of the animal sector is about the same size as the crops sector for the county as a whole. 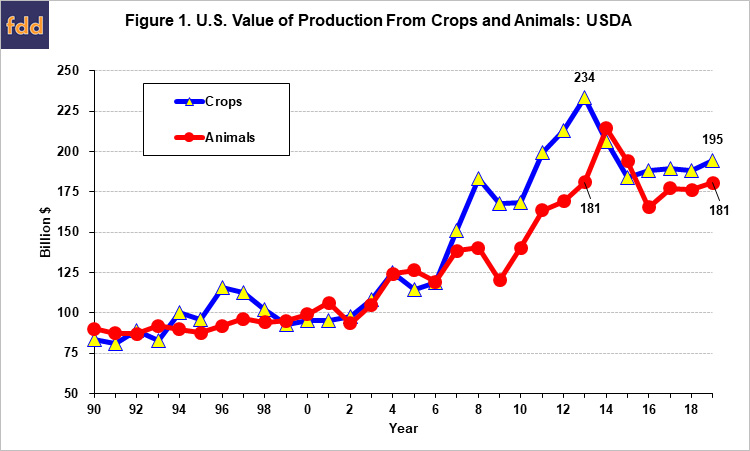 On a national basis the economic size of the crop sector and the animal sector are about equal as measured by the value of production by USDA.

The animal sector continues to add value, jobs, and rural economic activity as it has always done.

Farms have become more specialized in either crop or animal production over time.

These large-scale industrial systems have allowed locational movement which has resulted in more geographic concentration of production.

How individuals view the importance of animal production may be based on observations in their home state.