Low input use in African soybean systems limits productivity and ultimately, reduces profitability in smallholder farming systems. Phosphorous and inoculum are both critical components of soybean yield maximization, yet many farmers are reluctant to invest in inputs due to high cost and perceived minimal returns. The Soybean Management with Appropriate Research and Technology (SMART) Farm trials conducted in Nyankpala, northern Ghana (Figure 1), aimed to demonstrate the importance of inputs and input bundling (the combination of both phosphorous and inoculum) to increase yields.

The average soybean yield among smallholder farmers in Ghana is 12 bushels acre-1 (Amanor-Boadu et al., 2015) – substantially lower than both the national average of 26 bushels acre-1 (World Bank, 2017) and the global average of 42 bushels acre-1 (Purdy & Langmeier, 2018). Low soybean yields in smallholder systems are largely attributed to poor agronomic management, including little or no use of inputs. Many smallholders report an unwillingness to purchase inputs due to high costs of fertilizer and inoculum and low prices of soybean. The SMART Farm Ghana study found that profitability was substantially larger in systems using phosphorous, inoculum, or their combination. This indicates that changing traditional methods of farming is likely a larger obstacle to the adoption of input use than cost alone.

Inoculum and phosphorous are widely accepted as important tools for increasing soybean yields. Because both are key inputs in commercial soybean production and are readily available at most agricultural supply stores throughout Ghana, they were selected for bundling in the SMART Farm Trials. The use of bacterial inoculum increases soybean’s ability to biologically fix nitrogen, reducing the need to apply nitrogen fertilizer. This practice is still relatively new throughout sub-Saharan Africa, including Ghana, and inoculum adoption rates are low.  Phosphorous also plays a critical role in biological nitrogen fixation and is often the most limiting nutrient in soybean systems worldwide. Low adoption rates of fertilizer by smallholder farmers in Africa is, in part, due to the perception that the yield increases from fertilizer use do not justify its relatively high cost. Nonetheless, if farmers wish to shift from smallholder to commercialized soybean production systems, they will need to adopt more capital-intensive management practices. Increasing crop yields requires investment in inputs, which ultimately lead to greater returns than in no- or low-investment systems.

The SMART Farm Ghana study aimed to assess the impacts of two key inputs: NoduMax inoculant (Bradyrhizobium japonicum, strain USA 110) and phosphorous fertilizer (Triple Superphosphate or TSP) and their combination on the yields of five locally-available improved soybean varieties (Figure 2). The trial was conducted over four years, from 2014 to 2017, at the CSIR – Savanna Agricultural Research Institute (SARI) experimental station in Nyankpala. Six locally-available certified soybean seed varieties were manually drill seeded with a target yield of 50 bushels acre-1. Prior to planting, inoculation and inoculation plus phosphorous treatment seeds were inoculated with NoduMax at a rate of 8 oz. per 50 lbs. of seed (10 g kg-1). Phosphorous fertilizer (46% TSP) was band applied at a rate of 53 lbs. acre-1 for the phosphorous and inoculation plus phosphorous treatments. The TSP fertilizer was applied after the stand was thinned at the two-leaf stage.

This study highlighted the importance of soil pH for optimizing soybean yields. Because the soils in Nyankpala were so acidic, even phosphorous and inoculum additions were unable to maximize yields. In addition, low phosphorous application in the trials (53 lbs. acre-1) was likely insufficient to account for low phosphorous availability in the soil. Even if smallholders increase input use in their soybean systems, yields will be limited until they are able to increase soil pH and improve soil fertility. The Soybean Innovation Lab is encouraging extension workers to conduct soil tests on smallholders’ fields to provide farmers with tailored fertilizer recommendations, which will ultimately increase soybean productivity. 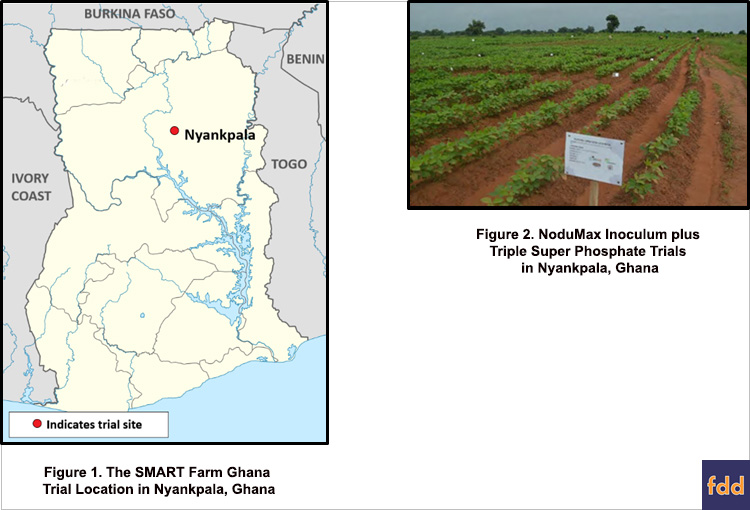