Corn processed into US ethanol has grown dramatically (see Figure1), and accounted for 37% of total US corn use during the 2018 market year (USDA (US Department of Agriculture), Office of the Chief Economist, November 2019).  A related, but broader issue is, “Has ethanol increased total US corn use?”  The simple analysis discussed in this article suggests that as of the 2018 market year the likely answer is yes, but the increase in total use is much smaller.  Growth in corn processed into ethanol has been offset by substantial reductions in US domestic use of corn excluding ethanol and in US share of world corn exports.  The latter is growing rapidly.  Implications and key questions are drawn for the US corn market and US farm and ethanol policy. 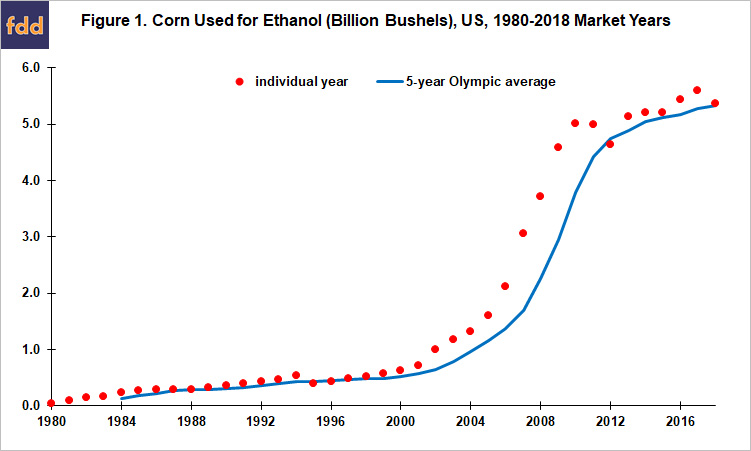 Policies to Expand Corn Ethanol – Brief Overview: Source for the material in this brief overview are extensive discussions of US ethanol and US ethanol policy by Duffield, Johansson, and Meyer (September 2015) and Wikipedia (November 2019).  US Federal policies to promote ethanol started with the use of tax credits in the 1970s.  Federal tax credits ended on December 31, 2011, but The Energy Policy Act of 2005 and Energy Independence and Security Act of 2007 had mandated annual ethanol use levels.  The mandates remain in effect, but setting the annual amount generates intense controversy.  Another key policy-related event was the discovery during the late 1990s that MTBE (methyl tertiary butyl ether), an oxygenate added to gasoline to reduce carbon monoxide emissions, was contaminating groundwater.  States began to ban MTBE, opening the door for ETBE from ethanol to be used as an oxygenate additive.  Final resolution in favor of ETBE occurred when a 2005 court decision denied legal protection for MTBE and The Energy Policy Act of 2005 removed the existing 2% oxygen requirement in reformulated gasoline.

Data and Procedures:  Data used in this analysis are supply and demand components from WASDE (World Agricultural Supply and Demand Estimates) reports and the PSD (Production, Supply, and Demand) website, both from USDA.  The analysis begins with the 1980 corn market year, the first year in which corn processed into ethanol was broken out for the US.  The data end with the recently completed 2018 market year.

This analysis focuses on longer term trends.  Thus, a 5-year Olympic average (5OA) of values for the current and past 4 years is used instead of the value for the current year.  An Olympic average removes the high and low value before calculating the average.  Both averaging and eliminating extreme values dampen variability.  This smoothing feature of 5OA is visible in Figure 1 even though US corn ethanol use is not highly variable from year to year. 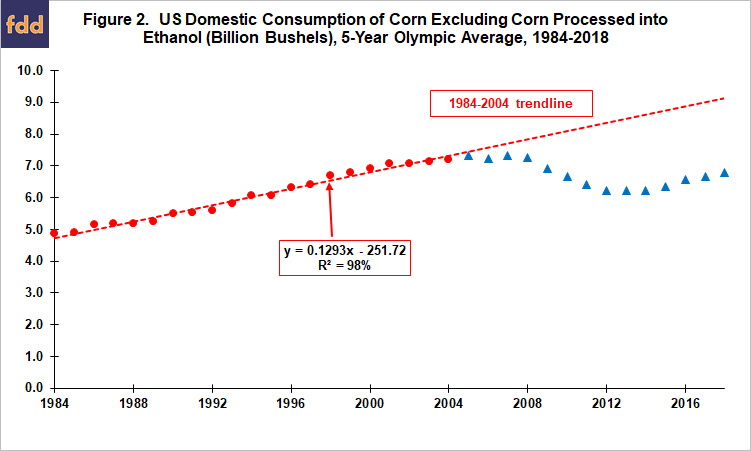 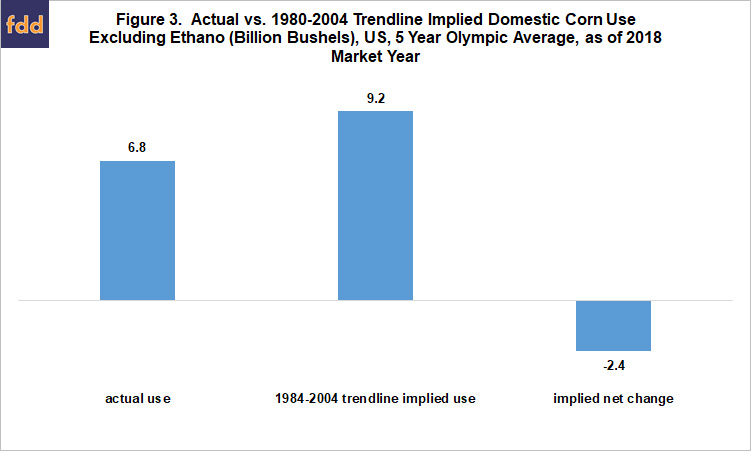 US Corn Prices:  From 1984 to 2004, US 5OA price of corn trended lower (see Figure 4), underscoring the attraction of growing the use of corn ethanol.  The 1985 farm bill reduced US farm prices in part to stimulate exports.  This policy combined with the 1988 drought to reduce the combined US corn-soybean-wheat 5OA stocks-to-use ratio (see Figure 5).  This ratio has not exceeded 20% since the mid-1990s, even after the 1996 farm bill ended annual land set asides and demand contracted during the Asian financial crisis of the late 1990s.  It is thus not surprising that US corn prices began to move higher when US ethanol production expanded rapidly after 2004 (see Figure 4).  Moreover, unlike the 1970s, the US decided in the 2008 farm bill not to respond to increasing crop prices by ending conservation land retirement programs.  Prices continued increasing through the 2012 drought.  Increasing prices likely caused users of corn to substitute cheaper alternatives, which is consistent with the analysis in the previous section, 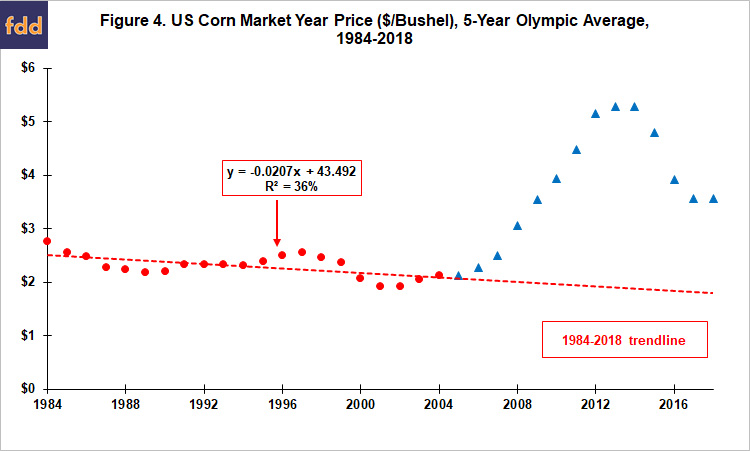 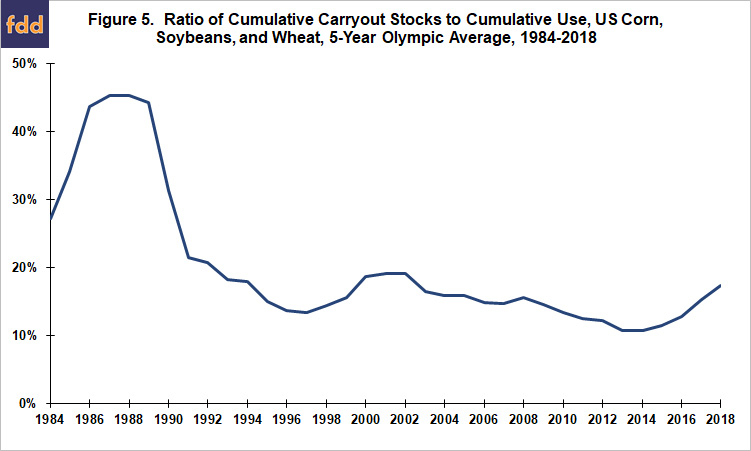 Corn Production in Other Countries:  Besides leading to US farm prosperity and causing users to search for cheaper alternatives, the extended period of higher corn prices provided a price umbrella that incentivized other countries to increase production of corn faster than a very stable pre-2005 trendline growth rate of +0.275 billion bushels per year (see Figure 6). 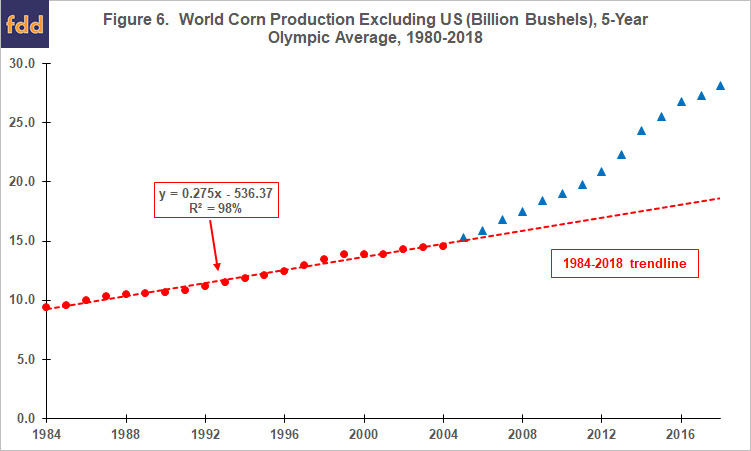 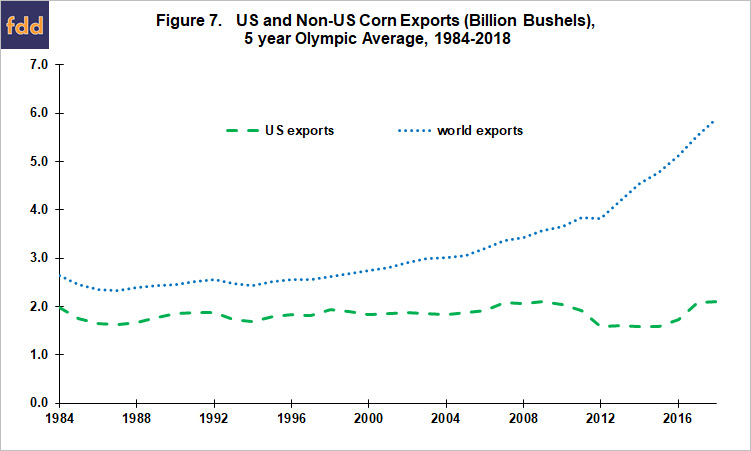 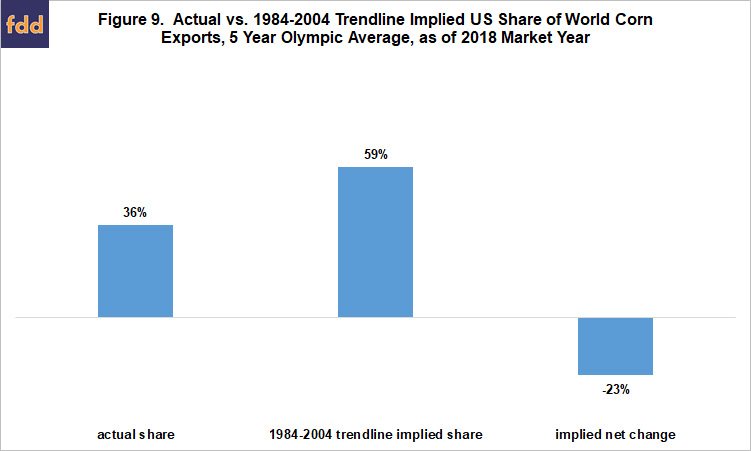 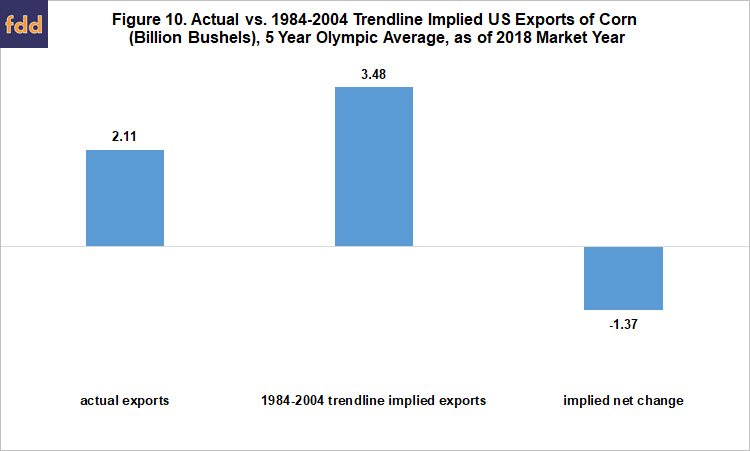 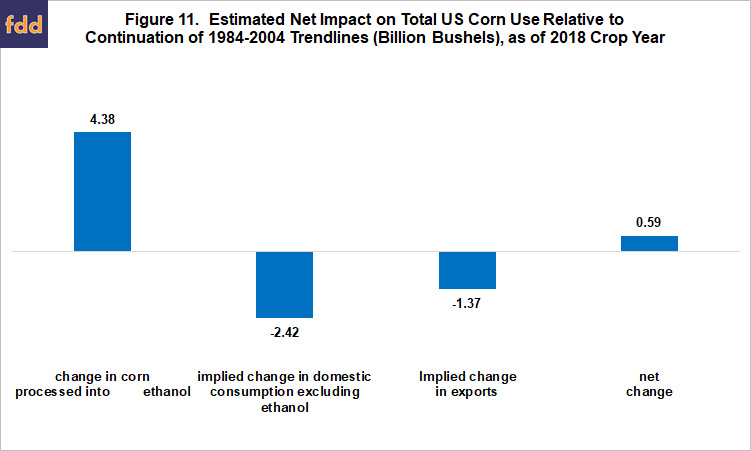 Sensitivity Analysis:  This simple analysis assumes an alternative future based on continuation of the 1984-2004 trends at the time the first ethanol mandate law was passed.  While not an unreasonable assumption, it is still an assumption.  Other factors besides US ethanol policy could have caused the deviations from historic trends.  One way to assess the impact of using historic trends is to calculate trends for different historic periods.  Net change for two such periods are presented in Figure 12.  One is the 10 years from 1995 through 2004.  Ten years is a commonly-used period.  The second is the 10 years from 1991 through 2000.  Corn processed into ethanol exceeded its 5-year Olympic average by at least 20% starting in 2000 and continuing through 2010.  The 1995-2004 trends generate a net increase in US total use of corn equal to 1.61 billion bushels, about 1 billion bushels more than the 1984-2004 trends.  This increase equals 37% of the increase in corn processed into ethanol.  On the other hand, the 1991-2000 trends results in a net decline in US total corn use of -.26 billion bushels.  These different net changes underscore the importance of the assumed historic trend. 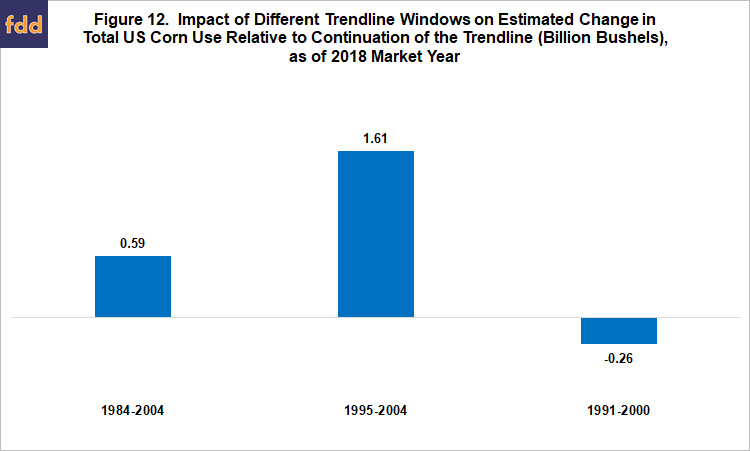 Duffield, J. A., R. Johansson, and S. Meyer.  September 2015.  U.S. Ethanol: An Examination of Policy, Production, Use, Distribution, and Market Interactions.  US Department of Agriculture, Office of the Chief Economist.  https://www.usda.gov/oce/reports/energy/EthanolExamination102015.pdf