Background:  SCO was first made available for the 2015 crop after being authorized in the 2014 farm bill.  SCO is an area insurance product designed to cover part of the deductible of an individual farm insurance product.  Individual farm insurance must be purchased for SCO to be an option.  SCO’s coverage window is between 86% and the underlying individual farm insurance coverage level.  For example, SCO’s coverage window is 75% to 86% if 75% individual insurance is bought.  SCO is not an option if the farm elects the ARC (Agricultural Risk Coverage) commodity program, although an exception was granted for 2019 crops due to late passage of the 2018 farm bill and thus a late commodity program sign-up period.  SCO’s subsidy rate is 65%.  Subsidy rates for SCO and enterprise insurance are compared in Data Note 1.  For additional, recent discussions of SCO, see the February 12, 2019, March 12, 2019, and December 17, 2019 farmdoc daily articles by Schnitkey.

Acres:  Acres in SCO increased by 4.8 million in 2019.  Reasons for the increase include the previously mentioned exception granted for 2019 and the expected shift from the ARC to PLC (Price Loss Coverage) commodity program under the 2018 farm bill.  Prior to 2019, acres in SCO had declined each year since 2015 (see Figure 1).  The decline in total from 2015 through 2018 exceeded 50%. 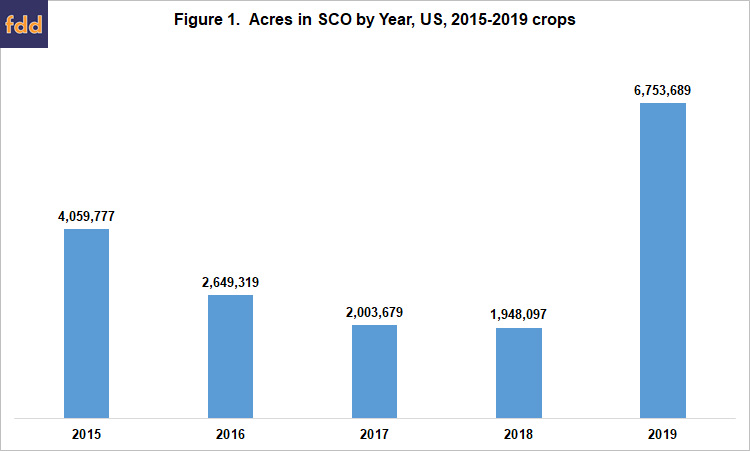 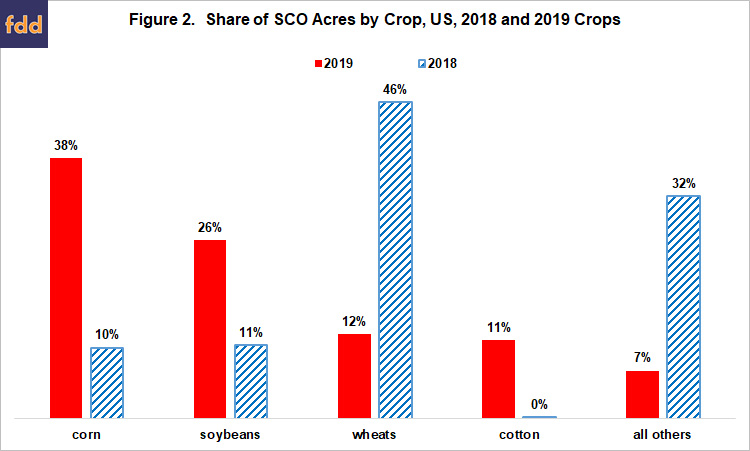 Cotton’s share also increased notably.  Cotton had its own version of SCO in the 2014 farm bill, known as STAX (Stacked Income Protection Plan).  STAX is being phased out as part of the compromise that led to the addition of seed cotton as a program commodity for ARC-CO and PLC.  Zulauf and Orden (December 2014) contains a detailed comparison of SCO and STAX.

Wheat Acres:  Unlike corn and soybeans, wheat acres in SCO declined in 2019, continuing a trend since 2015.  Perhaps more importantly, acres in SCO were lower in 2018 than 2015 for all crops for which SCO was first offered in 2015, including corn, soybeans and cotton. 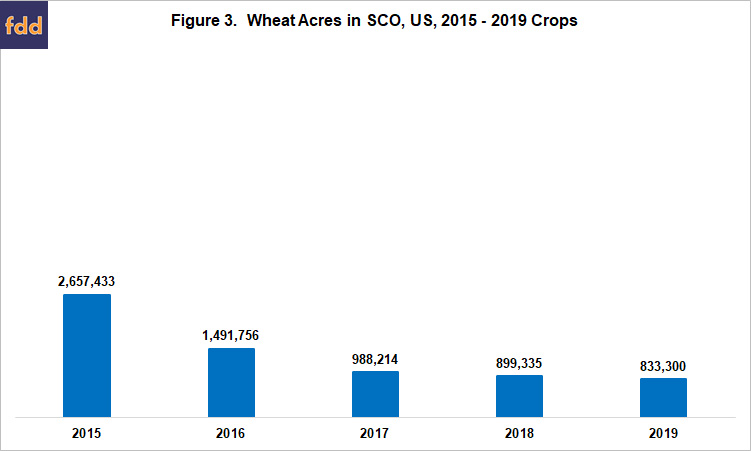 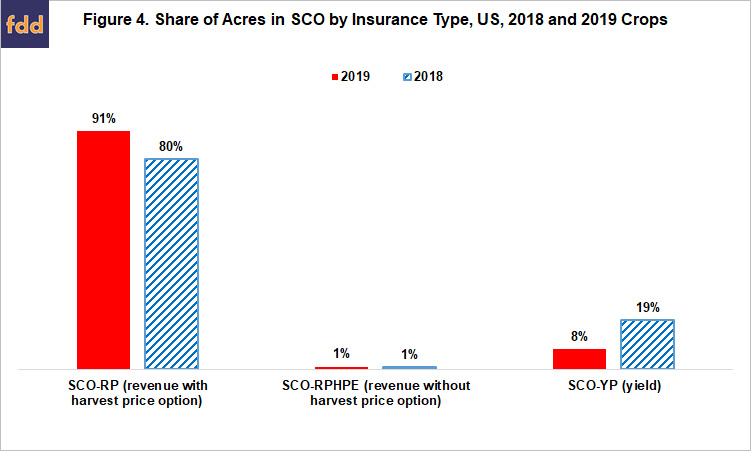 Geography:  New York had the highest share of RP acres in SCO-RP for both corn and soybeans among states with 100,000 or more RP acres of the crop in 2019 (see Figure 5).  More broadly, 9 of the top 10 states overlap for corn and soybeans.  The exceptions are Texas (corn) and Virginia (soybeans).  The 10 states are located east of the Mississippi River and in the southern plains. 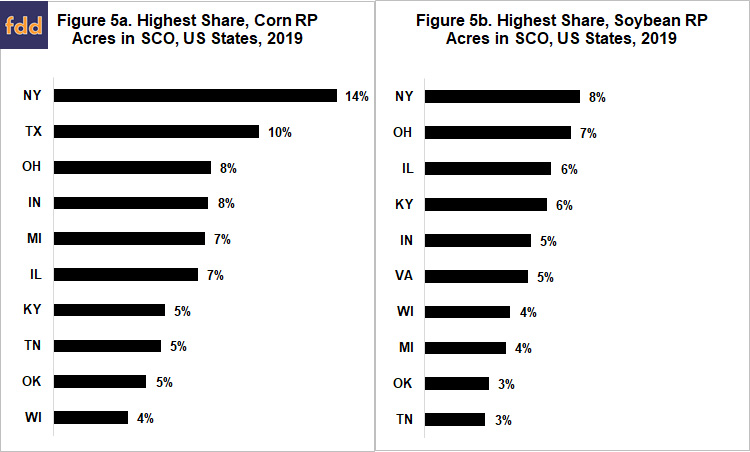 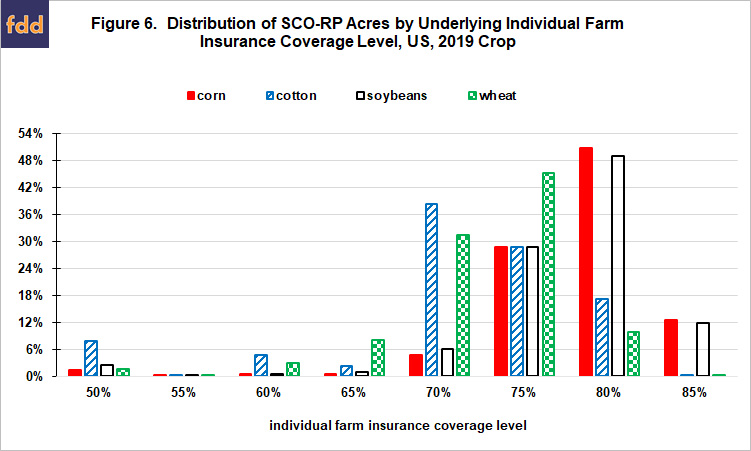 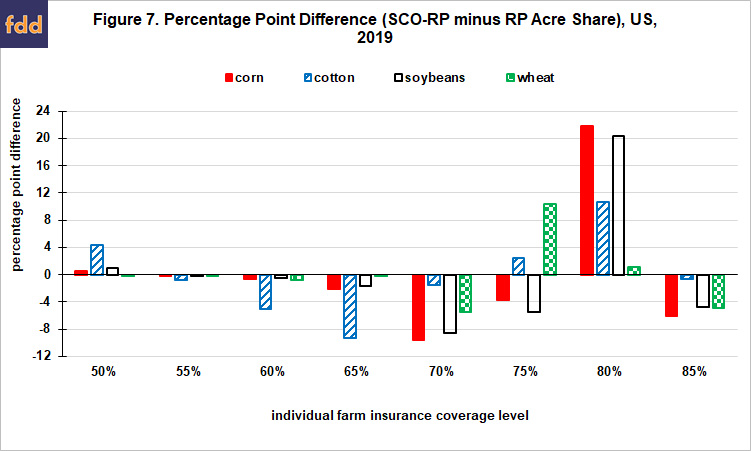 The SCO insurance option is generating considerable interest.  Based on USDA, RMA Summary of Business data, interest in SCO in 2019 was especially notable for corn, soybeans, and cotton and areas located east of the Mississippi River and in the southern plains.

Given the interest in SCO, it is important to consider the decline in SCO acres between 2015 and 2018.  Although most pronounced for wheat, the decline occurred for all crops for which SCO was first offered in 2015.  The declines prompt the following important questions:

Should the same storyline emerge, Congress and farm policy actors will have to decide if they wish to invest further in the SCO policy experiment, with a likely option being changes to the relationship between the subsidy levels for individual farm insurance and SCO.