One of the primary policy objectives of historic agricultural conservation programs has been shifting acres used to produce crops into natural resource conserving purposes, as discussed previously (farmdoc daily, November 14, 2019).  The Dust Bowl was the catalyst for one version of this policy (farmdoc daily, November 7, 2019).  Renewed concerns about soil erosion and the impact on natural resources arose in the years after World War II.  They combined with an increasingly bitter regional dispute over acres planted to the major crops, especially those diverted out of wheat and cotton crops under the parity system.  One proposal originated with farmers in Illinois to divert acres into conserving uses under a soil bank concept. This article continues the discussion on conservation policy with a review of the origins of what became the Soil Bank that was included in the Agricultural Act of 1956.

Congress created the Soil Bank as part of the Agricultural Act of 1956 at the urging of President Eisenhower (Coppess 2018).  Congress terminated the Soil Bank in the Food and Agricultural Act of 1965.  For ten years, the Soil Bank represented an attempt to address surplus commodities and agricultural acreage adjustments; a continuation of the concept of production control by limiting acres.  Two things, however, separated the Soil Bank from the previous New Deal or parity acreage policy.  First and foremost, the acres under contract were put into conserving uses rather than being diverted to other crops.  Second, it included multi-year contracts to retire for a longer time those acres less suitable to production in addition to year-by-year acreage reductions to reduce surplus stocks of supported commodities.

The Soil Bank had two mechanisms: (1) the Acreage Reserve was an annual reduction of price-supported crops as part of the effort to reduce production and surplus; and (2) the Conservation Reserve was a longer-term program for retiring acres from production and conserve natural resources, especially soil, with contracts ranging from 3 to 10 years depending on the land use (Cochrane and Ryan 1976).  Figure 1 provides a breakdown of the Soil Bank during its years of operation; for the Acreage Reserve, the acres reduced by commodity are indicated. 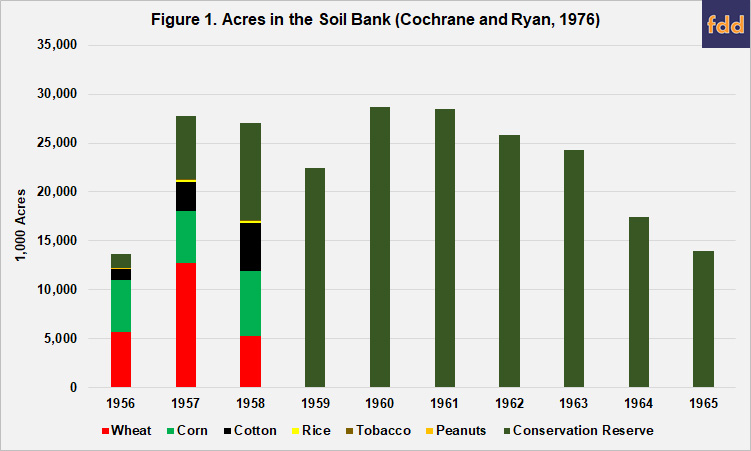 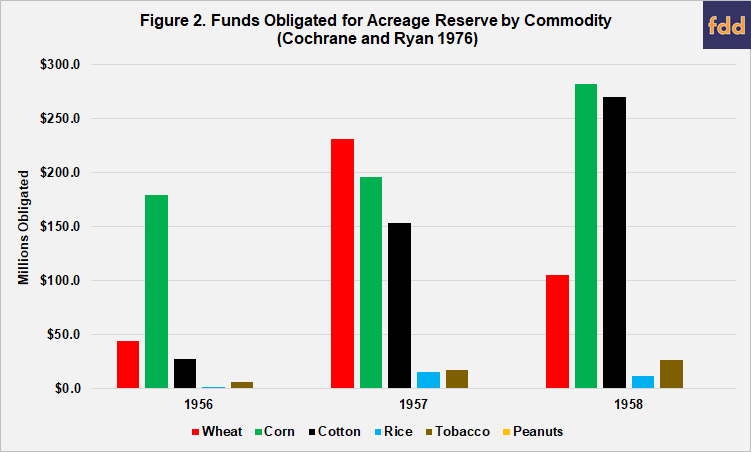 The seeds of the Soil Bank were sown in Bloomington, Illinois on October 17, 1953, by Melvin P. Gehlbach of Lincoln, Illinois (House Committee on Agriculture, 1953; Schapsmeier and Schapsmeier, 1970).  In his testimony, Mr. Gehlbach identified as a Fieldman for the Sangamon Valley Farm Bureau Farm Management Services, forerunner to the current Illinois Farm Business Farm Management organization, a cooperative educational-service program that assists farmers with management decision-making (Illinois FBFM).  He stated that the soil bank proposal he presented was based upon numerous discussions with farmers, as well as his work helping them manage their farms.  He appeared again before the House and Senate Ag Committees in April 1954, representing the Soil Bank Association which had been created by a committee of Illinois farmers to advocate for the soil bank policy (Senate Committee on Agriculture and Forestry, 1954; House Committee on Agriculture, 1954).  Mr. Gehlbach and other supporters argued that the soil bank concept was a better alternative to existing parity policy and acreage allotments.  Under parity policy, specific commodities were supported through loan rates which tended to encourage over-production.  Additionally, the policy sought to control production with reductions through acreage allotments; a system that permitted farmers to divert acres into other commodities.

As initially conceived, the soil bank proposal sought to conserve soil resources by helping farmers with lower yields and less-productive soils earn income on those acres by planting them to soil-building crops instead of soil-depleting row crops that were the subject of price supports and were generally in surplus.  Farmers producing soil-depleting crops (e.g., wheat, cotton, corn) would deposit funds into a soil bank on a per-unit of production basis.  The deposited funds would then be used to compensate farmers on those acres taken out of production of the soil-depleting crops and planted instead to soil-building crops.  The goal was to help make soil-building crops a profitable alternative to price-supported and soil-depleting crops on grain farms.  The result was expected to help address the building surpluses of supported crops while also avoiding the harm that price supports and acreage reductions caused to operations that fed livestock.

Further development of a soil bank concept can be attributed to Professor H.C.M. Case of the University of Illinois.  In 1954, Professor Case released a paper that advocated replacing the parity price support and acreage allotment system with a support policy the provided incentives to farmers to divert less-productive land out of supported crops and into conserving uses (Case 1954).  Professor Case built upon that concept in a paper released in 1955 that would have provided incentives to farmers to put acreage into conserving uses, including a sliding scale for price support loan rates that depended upon the acres diverted to conservation (Case 1955).  In addition, Members of Congress began introducing bills for diverting acres into conservation, including multiple bills in 1955 to establish a national conservation acreage reserve to divert acres from production.  It is clear from testimony, proposals and bills introduced in Congress, the growing surpluses of the supported crops, and the increasing disputes over acres (allotments, reductions and diversions) weighed heavily on the discussions leading up to the 1956 Act.  Figure 3 illustrates the total government-owned stocks of the supported commodities, as well as the other feed grains including sorghum, barley and oats (Cochrane and Ryan, 1976). 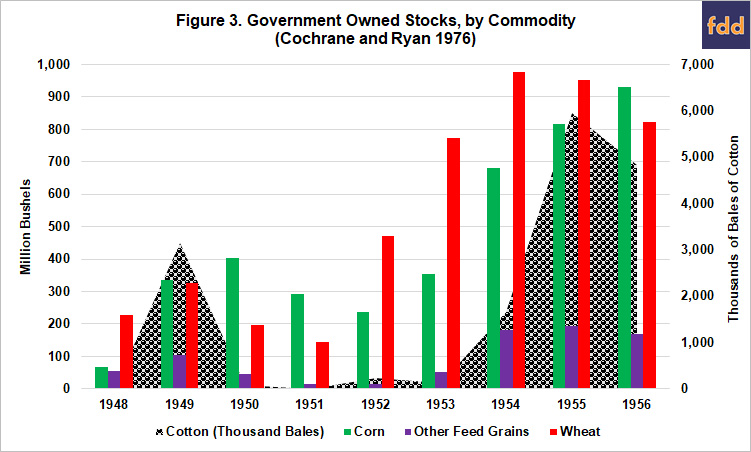 As Figure 3 shows, surpluses began to increase substantially after 1953 following the end of the Korean War.  Loan rates were fixed at the 90% of parity levels by the Agricultural Act of 1949, while the Korean War that had begun in 1950 ended abruptly in July 1953.  USDA had encouraged production for the war effort and crops were in the ground or, in the case of wheat, harvested before the war ended.  The growing surpluses were a focus of concern for both the 1954 and 1956 farm bill debates but the most heated political fights involved acres.

The developing support for a soil bank concept was not only in response to increasing surpluses.  Under questioning by Representative Harold Cooley (D-NC), the Ranking Member on the House Agriculture Committee, in 1954, Mr. Gehlbach made clear that one of the key motivating factors behind the push for the soil bank concept was to address the concern in the Corn Belt that diverted wheat and cotton acres were going into feed grains.  Additional acres of feed grains competed with corn for the domestic feed market while also contributing to the growing feed grain surplus (House Committee on Agriculture, 1954).  Under parity policy, surpluses of supported commodities led to efforts to reduce acreage allotments and planted acres as the attempt to control production and reduce surplus stocks.  Acreage diversion was a key source of the political fights between Midwestern corn interests and Southern cotton interests throughout the 1950s and early 1960s farm policy disputes (Coppess 2018).  For perspective on those disputes, Figure 4 illustrates the acres planted to the major price-supported commodities and the other feed grains, barley, oats, rye, and sorghum, as reported by NASS Quick Stats. 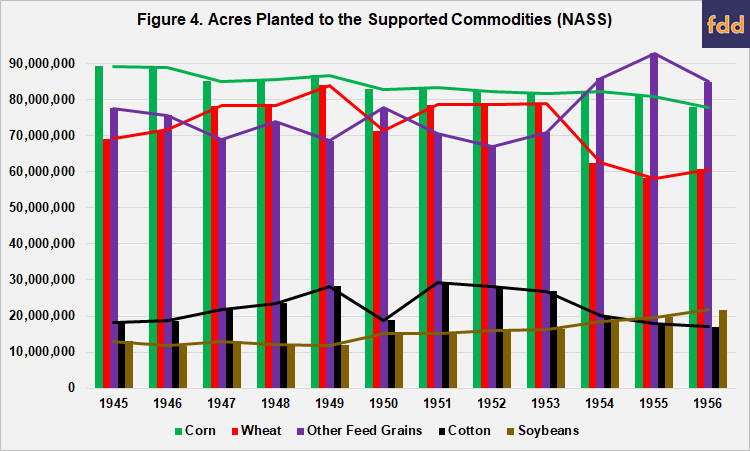 The substantial drop in acres planted to wheat and cotton, and the corresponding increase in acres planted to the other feed grains (barley, oats, rye and soybeans) is clear in Figure 4 beginning in 1954.  In fact, acres planted to the other feed grains exceeded acres planted to corn in 1954, 1955 and 1956.  The acreage shifting helps highlight the significant tension among the major production regions in the Corn Belt, the South and the Western Great Plains.  To further highlight the centrality of the acreage issue, Table 1 provides a national comparison of acres planted.  Given the push for production to meet the expected needs of the Korean War effort, acres planted from 1950 to 1953 (the war years) can be compared to the acres planted each year from 1954 to 1956 leading up to creation of the Soil Bank.  This comparison is summarized in Table 1 and provides another method for measuring the acreage issue that proponents of the soil bank sought to address.

Table 1 highlights the apparent acreage shifts out of wheat and cotton into the other feed grains (barley, oats, rye and sorghum) at the national level, as well as the continued increase in acres planted to soybeans.  It adds substantial weight to the concerns and frustrations expressed by Corn Belt farmers and their representatives during this contentious era of farm policy.  Table 1, combined with Figure 4, provide important reminders of the difficult acreage issues in farming where planting crops are the primary source of income.  For conservation policy to be effective, it has to provide a financially-viable alternative to crop production on millions of acres each year.  The soil bank proposal was an innovative policy concept designed for these issues.

It was into this politically fraught issue over acres in the major production regions that the soil bank was first proposed; seeds for new policy solutions sown in Illinois, growing out of frustration with surpluses of supported commodities and acres diverted in response.  The soil bank concept was also driven by concerns over the impacts that intensive row crop agricultural production had on soil and other natural resources, especially on the least productive acres; acres with soils more susceptible to erosion by wind and water.  Supporters argued that these two challenges required a policy that helped make soil-building or conserving crops just as profitable (or more profitable) on less productive, more environmentally-sensitive acres than price-supported commodity production that further depleted the soils.  The policy proposal would go through significant changes before being supported by the American Farm Bureau Federation and proposed to Congress by President Eisenhower.  Further revised, it would become a central component of the Agricultural Act of 1956; development of the concept, its inclusion in the farm bill by Congress and its performance will be the subject of future articles in this series exploring agricultural conservation policies.

Coppess, J. The Fault Lines of Farm Policy: A Legislative and Political History of the Farm Bill (University of Nebraska Press, 2018), https://www.nebraskapress.unl.edu/university-of-nebraska-press/9781496205124/.