The oomycete Phytophthora sojae, is a soil borne organism which is the predominant cause of Phytophthora root rot in soybeans. Believe it or not, P. sojae is fairly prevalent in Illinois, and under the correct conditions, this disease can result in reduced stands, blighted plants, or reduced productivity due to reduced nodulation resulting from infections. Oomycetes like P. sojae are also known as water molds, and consequently, are favored by wet, saturated soils. Infection typically occurs in poorly drained soils, compacted or low lying areas, no-till production systems, warm weather coupled with persistent rains.

Phytophthora sojae overwinters for up to 10 years in soils as resistant structures known as oospores, and can also overwinter in infected soybean residue.  Oospores germinate to produce a structure that bears small, tailed motile spores called zoospores.  Zoospores detect various exudates released from soybean roots and use these compounds to locate soybean roots (Figure 1).  Phytophthora sojae can infect plants at all stages of growth. 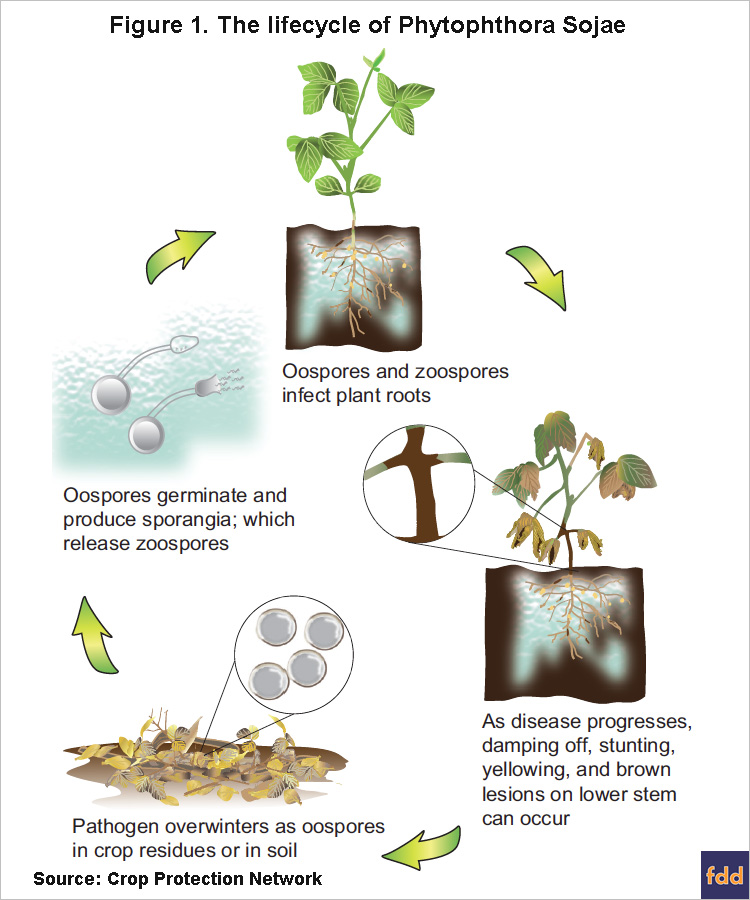 The predominant symptom of P. sojae infections early in the season include pre(before) and/or post (after) emergence damping off and reduced stands.  Entire portions of the field may be blank, or scattered dead plants and skipping can be observed. Symptoms at this stage will resemble infections by another oomycete pathogen group called Pythium, as well as flooding damage, making it very difficult to determine the cause by visual diagnosis alone.  Additional tests, such as ELISA or PCR may be needed to properly confirm the causal organism.

Late season symptoms include a root rot, stem rot and the development of a brown stem canker that develops from the roots up the stem (Figure 2).  Stem cankers can be observed on susceptible cultivars at any point in the season 1-2 weeks after heavy rains.  When the stem is sectioned, the vascular tissue is yellow/brown in color.  Secondary roots are often completely rotted, leaving only a black tap root when symptomatic plants are removed from the soil.  Other symptoms include stunting, chlorosis, and blighting. 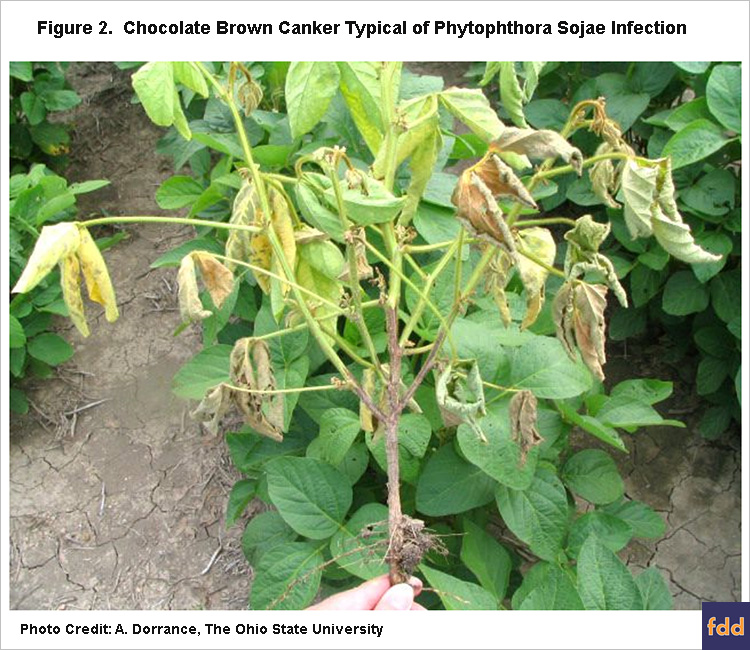 Management of P. sojae in soybeans:  What the heck is resistance anyways?

It is important to note that populations of P. sojae have evolved to overcome specific resistance genes (called Rps genes) in soybean cultivars.  A single Rps gene acts like a door, effectively shutting out individuals of P. sojae susceptible to a particular gene.  A benefit of Rps genes is that they are effective throughout the life of the plant; however, the drawback is P. sojae populations in fields are mixed, meaning that individuals that are insensitive to a particular Rps gene can still cause disease.  For example in surveys conducted in 2017,  over 60% of P. sojae recovered from fields would reproduce on plants containing Rps1k, one of the most common resistance genes used in soybeans produced in the state  (Figure 3).  These data are similar to a survey conducted in Illinois in 2013-2014, which indicated that over 50% of isolates were unaffected by Rps1k (Dorrence et al 2016).  Fields differ in the proportion of individuals able to overcome specific Rps genes (known as pathotypes), so some will have more or less individuals sensitive to a particular gene.  However, the fact that such a large portion of P. sojae is affected by Rps 1k is concerning, and the reason why producers should avoid planting the same cultivar, or cultivars with the same Rps genes, from year to year, and if possible, select cultivar with stacked resistance, meaning that more than 1 Rps gene is present.  This may help reduce the buildup of insensitivity of a population within a field to a specific Rps gene over time, as well as maximize the effective of the resistance. 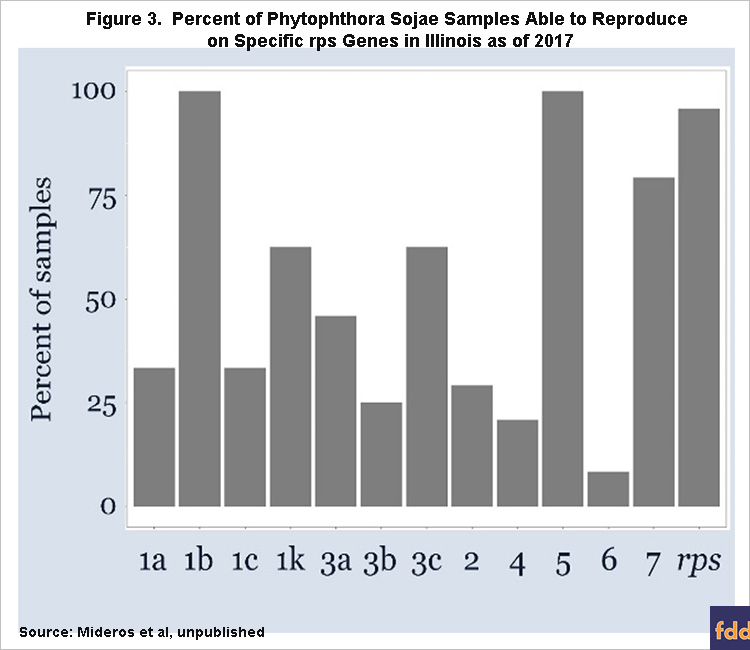 Soybeans also contain a type of resistance known as field tolerance, or general (partial) resistance.  This resistance is effective against all pathotypes of P. sojae, and results in reduced disease development over time.  However, the caveat is that general resistance does not kick in until plants produce their first trifoliate, meaning that emerging or very young seedlings will not benefit from the field tolerance trait.  Consequently, you can still see damping off and blighting of seedlings if conditions are favorable soon after planting.

If I use a seed treatment, I won’t need to worry about Phytophthora, right?

Seed treatments.  There are several seed treatment fungicides that have activity against P. sojae (For a list, visit the Illinois Field Crop Disease Hub: http://cropdisease.cropsciences.illinois.edu/?p=1060).  Oomycetes are different from true fungi, and consequently, not all fungicides will be effective for their management.  Seed treatments typically provide about 3 weeks of protection.  However, remember that they do not fumigate soils.  If conditions are favorable for P. sojae development after those initial 3 weeks, do not expect much of an effect.

What else can I do to reduce the effects of Phytophthora sojae?

The best way to manage P. sojae is through integrating the use of a Phytophthora resistant cultivar, seed treatment, and utilizing cultural practices to minimize environmental conditions that favor disease.