Brazilian farmers are on a trajectory to have the highest soybean return in history for the 2019/20 marketing year. Soybean prices have reached highs in recent months, caused by low domestic supplies and the depreciation of the Brazilian real (BRL) relative to the U.S. dollar (USD). Exchange rate movements have reduced the price of Brazilian products sold in foreign markets, thus making Brazil’s soybeans more competitive relative to U.S. soybeans.

The monthly price in the port of Paranaguá (Paraná state) increased 66.5% from January 1 to September 25, according to data from Center for Advanced Studies in Applied Economics (Cepea) of “Luiz de Queiroz” College of Agriculture at University of São Paulo (see Figure 1). A 60 kilos bag (2.2 bushels) was sold for BRL 150.86 (USD 27.35) on September 24, a nominal record of the Cepea historical series which began in March 2006. 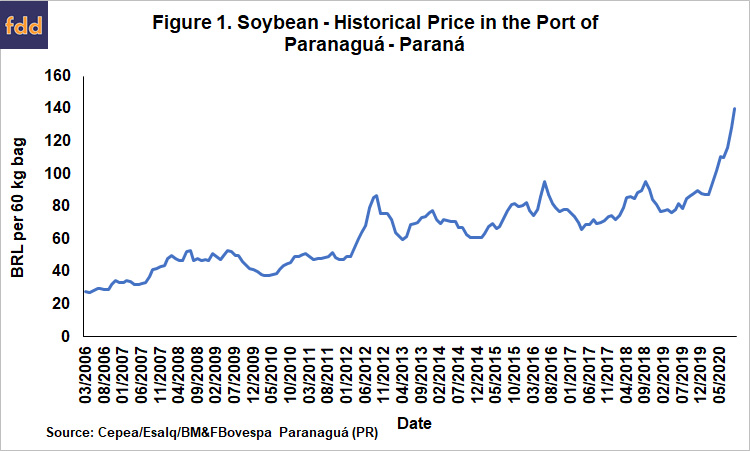 The increase in soybean price in Brazil is directly related to the depreciation of the BRL to the USD.  From January to September, the US dollar rose 29% relative to the Brazilian real (see Table 1). During the 2020 COVID-19 pandemic, Brazil’s currency depreciated further as its economy slowed. 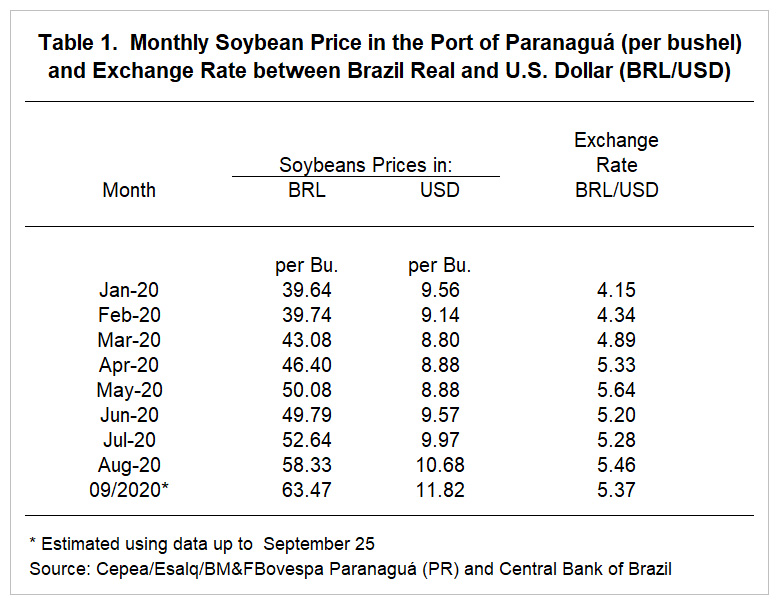 Besides currency changes, high premiums relative to Chicago Mercantile Exchange (CME) prices exist in Brazilian ports. In September and October this year, port premiums have been between $ 1.90 and $2.00 per bushel above CME prices. These premium increases occurred in a year in which Brazil harvested a record soybean crop, exceeding 124 million tons in 2019/2020 crop.

Brazil’s agricultural competitiveness led to record export soybean sales of almost 70 million tons in the first seven months of 2020. For the first six months of 2020, total agricultural exports were 36.3% higher than the same period last year (Ministry of Economy). Soybeans were responsible for 39% of all Brazilian agribusiness exports.

Factors suggest that soybean prices in Brazilian will continue to increase, as record exports generated a reduced domestic supply compared to previous years. Domestic demand remains firm due to large purchases of soybean meal and oil. Low soybean stocks are leading domestic industries to pay more in comparison to ports. According to consultancy Cogo – Intelligence in Agribusiness, this higher price inside the country than in the ports is unprecedented.

In addition to the limited supply in the domestic market, sales for the next crop have increased. Almost 50% of the 2020/2021 harvest has already been sold by the beginning of September. In the same period of last year and in the historical average, this percent was 20%, according consultancy Safras & Mercado. In Mato Grosso – a state within Brazil — farmers started the planting soybeans in September with more than 70% of the production already sold, a percentage well above the historical average of five years, which is 30%. 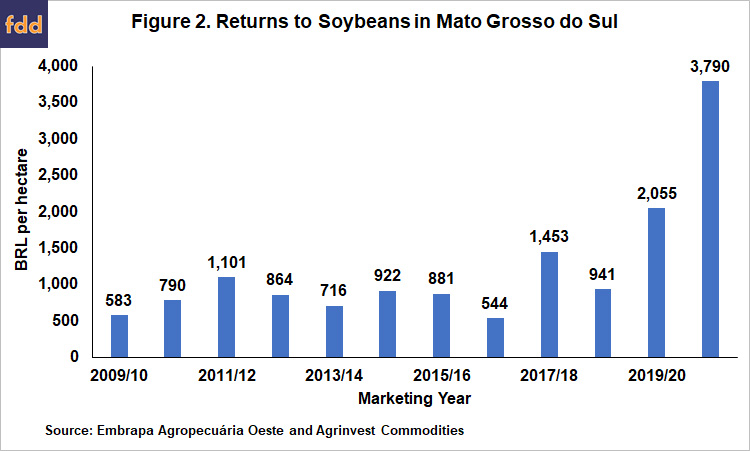 Besides impacting soybean prices, currency rates in the last year have lowered the costs of agricultural inputs, such as fertilizers and agrochemicals.  The dual impacts on prices and costs results in higher returns, leading to potential expansion in soybean acres. According to National Supply Company (Conab), the planted area is expected to grow 3% in the 2021/22 marketing year

Conab estimates that soybean exports will reach 86.4 million tons for 2020/21, an increase of 5% from 2019/20 levels.  Continued growth in Chinese demand is expected to result in export growth.

A Rabobank analysis suggests Brazil’s production growth will continue over the next ten years as a result of positive farm margins and land availability in Brazil.  Additional soybean acres could occur in pasturelands near new port infrastructure in the north of Brazil. In addition, Brazil potential in new frontiers, such as Matopiba (a region formed by four Brazilian states: Maranhão, Tocantins, Piauí and Bahia).

Brazilian farmers are likely to have the largest return of history in the 2020/2021 crop soybean as soybean prices have reached nominal records in recent months. High prices are a result of the low domestic supply and the depreciation of the BRL relative to the USD.  Soybean prices likely will remain high in Brazil, and soybean exports could grow for the 2020/21 marketing year. Brazil growth in production likely will continue over the next ten years.