Combines are the largest cost machinery item on most Midwest grain farms.  As such, periodically evaluating whether owning or out-sourcing combining is prudent, particularly at the point where a combine needs replacement.  To obtain the lowest costs, newer combines must be used on 1,500 acres or more per year.  If this is not occurring, another option may be lower cost.  Alternatively, other sources of returns will be needed to justify owning a combine on lower acreage farms.

Recently released crop budgets (farmdoc daily, August 4, 2020) project losses for corn and soybeans on Illinois farms, given current assumptions for 2021. Improvement in outlook could come from higher prices, above trend yields without lower prices, additional government aid, cuts in costs, or some combination of those. Farmers evaluating how costs may be cut in the upcoming year have several options, including reducing cash rents (see discussion in farmdoc daily, August 11, 2020).  Several options exist for reducing non-land costs, such as previously covered tillage related costs (farmdoc daily, August 18, 2020) and this article focusing on harvest related costs.

A farmer evaluating costs and returns may consider whether to own a combine versus outsourcing the task. Outsourcing the task would reduce capital costs and may be a cost minimizing solution for some farms. However, the ability to outsource is dependent on finding a custom operator and getting the work done in optimal timing. Harvesting before optimal timing can result in additional drying costs and harvesting after optimal timing can result in yield loss as the grain continues to dry and lose moisture. Harvest decisions may also be dependent on requirements of a landlord or business owner. Because of the capital investment needed for harvesting equipment, the decision on how to manage harvest operations will generally be a long-run decision.

These cost estimates can be useful when performing a harvest operation for another individual. For example, a generational family farm may have different levels of ownership, own separate pieces of machinery, or have acreage shares that don’t align with ownership, and these costs can be used as a resource for settling with other farm members. Or if a farmer is assisting a neighbor or seeking custom work, knowing their own cost of operation provides a baseline level for which to add a profit margin when setting a custom rate.

The estimated machinery costs can also be useful when determining what equipment has the greatest economic return to the farm as compared to what it would cost to outsource the associated task. Iowa State University custom farming surveys are useful for outsourcing decisions.

Annually, Iowa State University surveys those who hire and/or perform custom farm services and compiles a report of results. Unlike the farmdoc machinery cost estimates which represent actual economic cost of performing the harvest operation, the custom rate survey reports actual rates expected to be charged or paid in 2020.  Understanding the difference in the intent of the two reports, and acknowledging some differences in general assumptions (for example, fuel rate of $2.50 versus $2.63 per gallon), explains the potential differences in rates reported from each source. A comparison of the two sets of rates provides a baseline that can be used to evaluate costs of owning equipment and performing harvest operations versus outsourcing. Although the actual costs will vary from farm to farm, and are dependent on the number of acres and the size or capacity of the equipment used, the averages presented here can be used as a guide.

Unlike some field operations which may be performed on only a portion of acres, harvest operations will cover all harvestable acres, generally all planted acres on a farm. Timing of harvest is also critical in cost management considerations.

For corn, once the crop has reached maturity the desirable moisture level for grain at harvest is 15%. Elevated autumn temperatures can lead to rapid grain moisture loss, with losses as great as 1% per day when temperatures are high and particularly when also breezy (see Nafziger, September 16, 2017). If kernels lose moisture without changing size or shape to become more dense, yield loss occurs (see Nafziger, October 3, 2003). Alternatively, harvesting at moisture levels above 15% can result in added costs for drying.

Once soybeans have reached maturity, plants may still be too wet and green to harvest and grain moisture still above an acceptable level. However, mature soybeans can dry quickly, in a matter of hours, rather than days. The desirable moisture level for harvested soybeans is 13% moisture. If too dry, pods may crack and drop seeds resulting in lower yields. The seeds can absorb moisture overnight, so timing of harvest within a day may be important (see Nafziger, September 16, 2017).

For farms with fields in multiple locations, optimal harvest timing may not be reached in a logistical order. And farmers may find the optimal order requires switching back and forth between corn and soybeans multiple times. Farmers who own and operate their own machinery for harvest operations are able to make these decisions and select an optimal harvest order and timing. Farmers who hire a custom operator may not be able to find an operator who can harvest in optimal timing, or may not be able to find an operator who is willing to switch between crops or follow an order of maturity. A custom harvester is likely to prefer progressing by physical location and crop.

With many factors that vary by farm and year, it can be difficult to determine the best approach for harvest operations from a cost management standpoint.

The equipment needed to harvest can be costly to own and operate, particularly when purchased new or relatively new. Farms may have some of the equipment needed already and it may be fully paid for and fully depreciated. For farms in that situation, the cost of retaining that equipment to use as needed is comparatively lower than the economic cost of a newer implement because depreciation and interest make up a large portion of the economic costs. The following comparisons are relevant to farms who already own newer harvesting equipment or those who are considering a purchase while aiming to manage costs effectively.

A summary of costs for harvest operations from the farmdoc machinery cost estimates is shown in Table 1 next to the corresponding average, median, minimum and maximum custom rates from the Iowa survey responses. 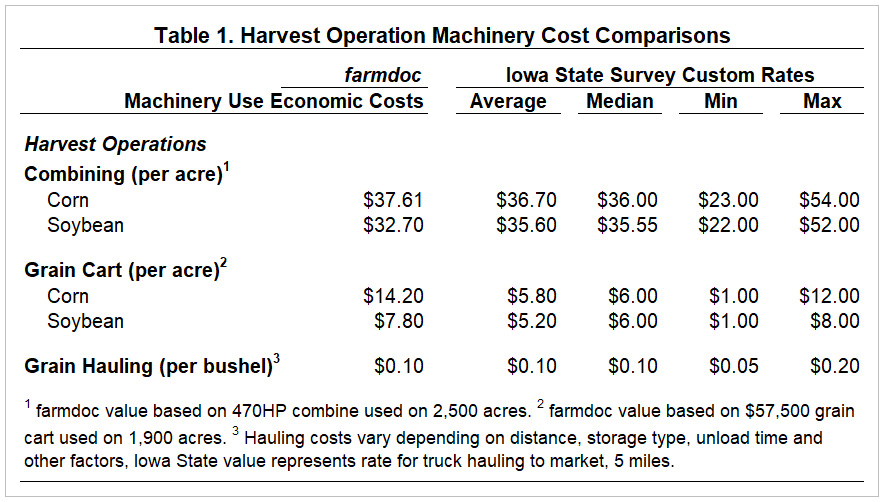 The economic cost for combining corn and soybeans is based on ownership of a 470 horsepower combine with a 35-foot grain head and a 12-row corn head used to harvest 1,500 acres of corn and 1,000 acres of soybeans. The economic cost of harvesting corn is $37.61 per acre, within $2 per acre of the custom rate average and median. The economic cost of harvesting soybeans is $32.70 per acre, nearly $3 per acre below the custom rate average and median. When spread over the same acres used to calculate farmdoc economic costs, the total average cost for custom combining is $90,650 (1,500 x $36.70 + 1,000 x $35.60).

Based on survey results, it would be possible to hire a custom operator well below the economic cost of owning and operating. However, it may be a challenge to find a low cost custom harvester in some areas and this takes control over timing out of the farmers hands. The lack of control of harvest timing may result in added costs such as drying or lower revenue due to yield loss, as discussed previously.

A number of assumptions are made to estimate economic costs for combining and grain cart, but cost of hauling grain is even more complex. Grain hauling costs vary greatly depending on the distance to the storage location, the type of storage location, and the time it takes to unload, among other factors. Unlike other field operations which are typically reported on a per acre basis, grain hauling is generally factored on a per bushel basis. The farmdoc economic cost estimate is set at $0.10 per bushel. The Iowa State custom rate survey breaks this down based on hauling to farm storage versus to market, and various distances. A seemingly comparable figure is the rate for hauling to market five miles away with an average and median at $0.10 per bushel, and rates ranging from $0.05 per bushel to $0.20 per bushel. When it comes to outsourcing harvest operations, often this is the first choice for a number of reasons. Custom operators to haul grain are generally available for hire, and at a cost that is the same as the farmer’s cost of owning and operating. Also, hiring a custom operator for hauling grain can be beneficial for farms who do not have many operators and may be unable to hire a qualified operator for only the harvest season.

For a given size of combine, the economic cost per acre declines as the acreage increases. Having a combine adequately sized for acres to be harvested is an important consideration when making harvest equipment decisions. For example, a 2,000-acre farm could run a 540 horsepower combine at a cost of $45.80 per acre for corn or a 320 horsepower combine at a cost of $39.70 per acre for corn. With a larger machine harvest could progress faster, but the cost is an extra $6 per acre. Similarly, it would result in an extra $5 per acre cost for soybeans.  A farm may justify the higher cost per acre, with the expectation for added costs or lost revenue if harvest progressed at a slower pace with the smaller combine. This decision may also be dependent on the amount of fall fieldwork and if those operations are performed by the farmer. This profit maximizing decision will vary from farm to farm.

Based on the above comparisons, the following suggestions result:

Further note that that these decisions are longer run in nature as well.  Deciding to outsource one or more harvest operations in a single year will reduce fuel, labor, and repair costs for the given year, but the ownership costs will remain. Given the close comparison of economic costs to custom rate costs, it likely would not make sense for a farm to hire a custom combine or grain cart if those pieces of machinery are already owned unless the farm plans to make a long run decision to change approach and sell the equipment. It is generally most cost effective in the long-run to own and operate a combine and grain cart for corn and soybeans, but important that equipment to be scaled appropriately to the farm.

When thinking about the possibility of hiring a custom operator, there are several other factors to consider. In some areas it may be difficult to outsource, either based on availability of a custom operator, timeliness of completing the task, or not aligning properly with how the crops were planted. Some farms may have to comply with special requirements of land or business owners. Farms that own a grain drying and storage facility may have additional incentive to do all harvest operations themselves.

Harvest will occur on all harvestable acres on a farm each year and it generally is cost effective to own the combine and grain cart for harvest operations. Depending on the farm size, number of farm operators, and where grain is transported out of the field, it can be cost effective to hire a custom grain hauler. Because average custom combining costs for corn and soybeans are nearly the same as economic costs and timing could be an issue with a custom harvester, a farm with adequate labor will generally find it cost effective to own and operate a combine. Another consideration is owning equipment that is sized appropriately for acres and production.