Public funding of agricultural research is widely-accepted as a cornerstone of US agricultural abundance.  Etched on this cornerstone is the objective, “Grow 2 blades of grass where 1 grew before.”  Rarely is public policy so successful: corn yield has quintupled from 30 to 178 bushels per acre over the last 100 years.  Higher yields however have lost public policy favor.  Public funding of US agricultural research has declined in inflation-adjusted dollars since 2005, with actual dollar declines in recent years (Clancy, Fuglie, and Heisey).  Agriculture’s 21st Century research issue is use of farmland, not higher yields; with a reimagined objective of “Grow 2 crops per acre where 1 grew before.”

Land, not Yield: Since 1975, US share of world production has increased over multiple years only when US share of acres increased (see Figure 1).  Yields garner the attention, but acres are critical to world economic significance of US crop agriculture. 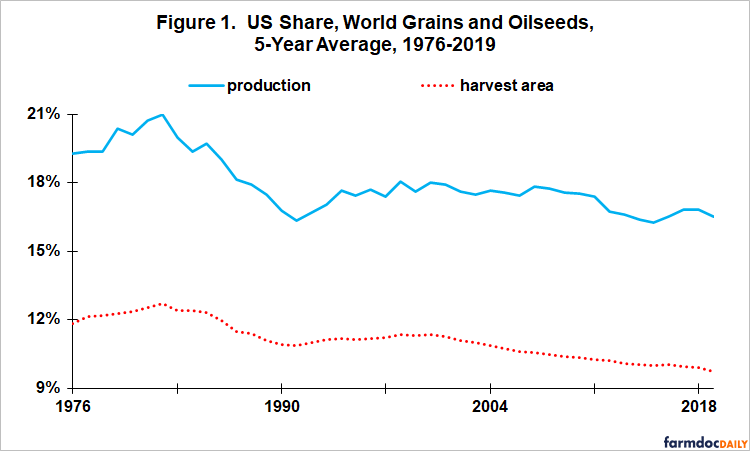 Another land use issue, cover crops, has attracted attention as a potential way to improve soil health, capture carbon, and improve water quality.  Planting cover crops require upfront expenses, with economic benefits realized over a number of years.  Moreover, it is not clear if economic benefits exceed economic costs even including current public subsidies for cover crops (Plastina, Liu, Sawadgo, Miguez, and Carlson).

The ultimate cover crop is a second crop per acre that maximizes environmental benefits and generates immediate economic return.  Multiple cropping’s potential is illustrated by soybean-corn double cropping in Brazil.  Between 2004 and 2014, second, or safrinha, corn increased from 22% to 64% of corn produced in the major Brazilian agricultural state of Mato Grosso (Allen and Valdes).  Safrinha corn also underscores the potential threat to US agriculture of multiple cropping rotations by countries with longer growing seasons and facilitated by more drought tolerant varieties.  In the US, the most common multiple cropping of field crops is soybeans as a second crop, often after winter wheat.  It accounts for only 5% of US soybean acres.  Earlier maturing wheat and soybeans with no loss of yield would spur adoption of the rotation, increasing acres under cover and US share of world production.  Environmentally sensitive cropland could also be retired.  Further innovation is likely if agriculture’s research and entrepreneurial spirit is focused on multiple crops per acre.  For example, development of productive, shorter season cultivars paired with timely, accurate measurement and monetization of ecosystem services and carbon capture by cover crops could improve the likelihood of their immediate profitability.

Win-Win Public Policy: “Growing 2 crops per acre where 1 grew before” offers a potential rarity: a win-win public policy by reinvigorating the business of US agriculture while enhancing environmental quality.