This is a presentation summary from the 2020 virtual Illinois Farm Economics Summit (IFES). A video of the webinar and PowerPoint Slides (PDF) are available here.

The U.S. Ag sector has experienced massive disruptions and significant impacts from trade disputes, exchange rate fluctuations, interest rate market interventions and the impacts on cost of capital; and recently from rapidly registered massive changes in consumer preferences and behaviors resulting from coronavirus control measures.  Consumers are working at home, eating at home, and demanding to know more about their food supply.  Gasoline and ethanol usage was also dramatically curtailed for much of 2020 as travel and business commuting came to a near halt.  These issues combined to increase uncertainty about farmland markets and farmland income prospects going forward.

The federal government has responded with a variety of payment programs including MFP payments, PPP, CFAP, and dozens of indirect programs to support individuals and businesses during the forced shutdowns and lockdowns.  Food inflation has outpaced general inflation, but there are also numerous examples of food-chain interruption and direct supporting interventions by the federal government, and uncertainty about a return to normalized trade relationships.  Finally, the incoming administration has strongly signaled an intent to focus on environmental linkages, climate-related services, and the carbon footprint of agriculture going forward, raising the possibility of usage of either payment incentive systems, or regulatory systems to induce preferred production system changes.  In any case, the magnitude of stimulus payments and the recent signaling by the Fed of an expectation to target higher inflation post pandemic also raise important questions about the impact on farmland values and incomes if that were to occur.

These are clearly unprecedented times, but it is still useful to examine history and understand the major relationships between farmland markets and macro conditions through time to better understand possible impacts of government program changes and the role of macro market conditions on farm asset values and incomes.  In many cases, “macro conditions” can be summarized with measures of inflation, employment, costs of capital (yield curve), and value of the dollar as a proxy for export/import affordability.  Added to the list could be tax policy as well, and environmental/sustainability issues related to production of food, and regulatory models for food and bio-energy production.

Figure 1 (near the end) shows two major informative summaries of the historic level of inflation and of interest rates from the 1970s to present against which we will consider farm sector performance.  A short and stylized historical summary by decade would include that the end of the gold standard (early 1970s) was followed by a decade of increasing inflation and increasing interest rates.  Farm loans by the early 1980s often carried 15% or higher nominal interest rates and could extend for 40 year amortizations.  In the early 1980s, then Federal Reserve Chair Volcker announced a new set of targets focused on inflation control and active interest rate management.  The farm crisis of the early 1980s resulted at least in part from a reversal of the inflation induced increase in asset values and the inability for lenders to manage cost-of-funds reversals.  Importantly, farmland returns have been very consistently correlated with inflation through time, and the impact of the reversal led to farmland value declines.  What might be referred to as the long and stable Greenspan era that followed through the 1990s and middle of the first decade of the 2000s included formalization of “no surprise” Fed signaling, and market driven Federal Reserve Monetary policies.  Unfortunately, the 2008 Housing Crisis occurred and was followed by unprecedented monetary intervention in financial markets, and direct management of interest rates through large scale Fed purchase and sales of Treasury securities.  At the same time, the “ethanol boom” was continuing and export growth was reasonably persistent as well leaving farm incomes and assets relatively unscathed.  The return to “all clear” was announced in 2015 and included returns to more normalized rate features, and a cooling down in the farmland markets which had also benefitted from low interest rates and reasonable export demand. 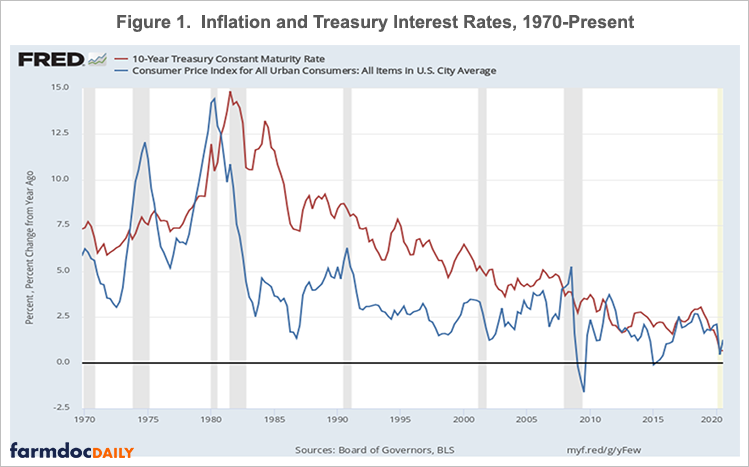 Tables 1 and 2 (below, after graph) contain a simple summary of farm asset returns from 1990 to present, and of spread to inflation over the previous five decades with the clear message that farmland has performed well during stable and inflationary times, and even in the 1980s when major revaluations occurred, posted total returns in excess of inflation.  In fact, the strength of that relationship actually increases with holding period – in other words, the performance of farmland relative to inflation actually improves under longer holding periods.  Added to this result is the long-standing behavior of farmland as a diversifier when held with financial assets with negative or low correlation to equities.

A second macro question has to do with the strength of the dollar and the impact on exports – and how that may change as we emerge from the pandemic and respond to growing food demand from China and other parts of the world.  Unfortunately, this is a more complicated relationship as the movement in the purchasing power of the dollar has not been remotely uniform with respect to other currencies.  Since the beginning of 2020, the dollar first generally strengthened further against most other trading partner currencies (China, Brazil, Mexico, Canada, UK, and Euro) but then pulled back more than proportionally with respect to China, Canada, and the Eurozone and UK.  The most obvious impact late in 2020 was the increasing sales of us agricultural products to China, but it remains to be seen if the dollar strength will continue to recede with the accompanying effects of increasing export pressure.

A final area of concern in the agricultural sector relates to the changing administration, and the impact on federal agricultural support payments.  The recent 4 years or so have included major reliance on ad hoc agricultural payments, and some worry that the administration and possible senate realignment and Democratic house control will lead to a loss of agricultural support. The historic party composition of the House, Senate, and White House have not had a strong correlation with agricultural payments however, and the Crop Insurance Title of the Farm Bill in particular appears to be solidly supported by both parties — and is very countercyclical by its nature.  The Conservation Title could experience more targeted changes, but few expect the total support to be diminished due to the party-composition of the three units.

Farmland returns have historically been positively impacted by improving world demand and improving diets around the world, and by inflation that occurs from productivity increases as well.  It remains to be seen if significant inflation will eventually follow the stimulus payments that have occurred through 2020 and are likely in 2021, but historical indicators would suggest that could be good for farmland values.  Return to more normalized trade is also critical and so is continued growth in economies with expanding consumer spending on food in much of the world.   The role of agriculture in the climate debate will also be increasingly in focus in US Ag Policy discussions, and it remains to be seen if return to food consumption patterns that existed pre-pandemic will ever return.  At this point, food inflation has been higher than the aggregate inflation rate, and more food is being consumed at home where the expenditure share that accrues to producers is greater than for food consumed in restaurants and food service venues.   Moreover consumers preferences for information about production attributes and features of production systems related to sustainability measures will almost surely increase, perhaps with an increased willingness for expenditures on food produced with desired characteristics or identity information.  And a critical feature of the ag sector is that it has historically had a very low reliance on debt capital by comparison to other sectors.  A continued low interest rate environment and continued consolidation favor higher debt shares for efficiency in capital investments as “financialization” of the sector continues.

The complete set of slides for this presentation can be found at: https://farmdocdaily.illinois.edu/webinar/farmland-markets-and-macro-markets