We provide background on nitrogen fertilizer production in the United States, thereby aiding in understanding conservation concerns with nitrogen production. Nitrogen is the most abundant gas in the atmosphere and makes up approximately 78% of the atmosphere. One of the most important scientific discoveries of the 20th century is the Haber-Bosch process, which transforms atmospheric nitrogen into synthetic nitrogen for crop fertilization. The discovery of the Haber-Bosch process allowed for the widespread fertilization of crops, and together with other agricultural technology advancements, helped revolutionize food production for a growing world population. This article explores the history of nitrogen fertilizer use in the U.S., briefly explains the science of synthetic nitrogen production, and provides a discussion about the nitrogen industry in the U.S. today.

History of Fertilizer in the U.S.

According to Nelson (1990), the first documented use of fertilizer in the U.S. was by Native Americans who lived along certain streams in New England and New York and used fish caught in these streams to fertilize corn. Early colonists in the U.S. relied mostly on exploitative agriculture, which involved planting crops on the same field year after year until the soil became unproductive and then moving to a new field. However, this was unsustainable and led to attempts to improve agricultural productivity in the U.S. The first sales of a commercial material to add nutrients to the soil began with guano imported from Peru, which was the principal fertilizer used in the U.S. from 1840 to 1870. Guano is composed of bird manure that accumulated in deposits on islands off the coast of Peru, but its use was unsustainable as these deposits were quickly mined and depleted when it became a popular fertilizer worldwide. Other early commercial fertilizers used in the U.S. included bones, fish scrap, slaughterhouse waste, wood ashes, sodium nitrate shipped from Peru and Chile, ammonium sulfate from coal gas plants, cottonseed meal, and poudrette (human waste). Fertilizer use increased from 1870-1920, and the development and distribution of information about nitrogen fertilizer practices through agricultural institutions, state extension services, field experiments, and the USDA led to better fertility practices and improved fertilizer use on farms. However, yields remained relatively stable throughout this period, as the actual average per acre use of plant nutrients remained relatively low, especially in comparison to today (Nelson 1990).

During the 68th annual meeting of the British Association for the Advancement of Science in 1898, a chemist named Sir William Crookes spoke in his presidential address of his concern that the world population would soon become much greater than the global food supply, and with the Chilean nitrate deposits being quickly depleted, he called on the world’s chemists and chemical engineers to develop a nitrogen fixation process to tap into atmospheric nitrogen (Nelson 1990). Although many scientists laid the groundwork, two German chemists at BASF, Fritz Haber and Carl Bosch, discovered how to turn atmospheric nitrogen into ammonia. Haber discovered the method that made the manufacture of ammonia feasible in 1909 and Bosch standardized Haber’s process in 1913 (Melillo 2012).

The Haber-Bosch process utilizes hydrogen and atmospheric nitrogen under extremely high pressure and temperature in combination with a metal catalyst such as iron to produce ammonia gas, which is condensed with the help of cold water, forming liquid ammonia also known as anhydrous ammonia (Figure 1A). In this process, natural gas is typically used as a hydrogen feedstock and as a source of energy to obtain the high pressure and temperature required for the reaction, and for this reason, natural gas and nitrogen fertilizer prices are closely related (Sawyer et al. 2010).

The primary product of Haber-Bosch’s process, anhydrous ammonia, is extensively used for corn production through direct application in the midwestern United States (Illinois Department of Agriculture 2019). This can be attributed to: (i) an unmatchable nitrogen content (82%) that reduces transportation, storage, and distribution costs when compared to other nitrogen sources, (ii) the possibility for fall application that matches optimal weather conditions for fieldwork, and also because the price of this fertilizer tends to be lower in the fall than in the spring (Schnitkey 2018). Anhydrous ammonia also has disadvantages, especially its toxicity that requires specially designed and well-maintained equipment for storing and handling under high pressure. The challenge of storing and handling anhydrous ammonia is one of the reasons why ammonia is the foundation for many other nitrogen fertilizers such as urea, urea-ammonium nitrate (UAN) solutions, ammonium sulfate, and calcium nitrate, as shown in Figure 1B. The discussion in this article will focus on the main sources of nitrogen fertilizer applied in the United States, which are anhydrous ammonia, UAN, and urea. 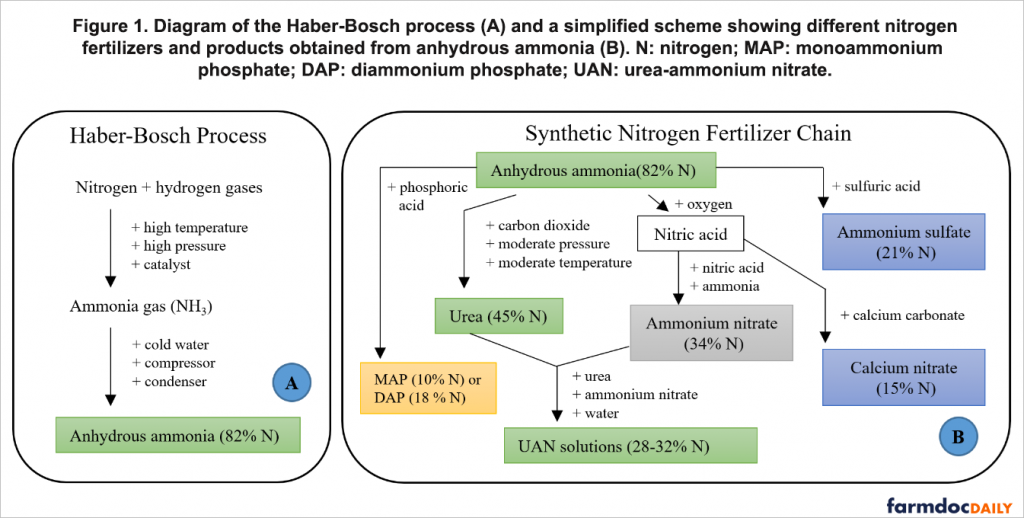 Among the synthetic nitrogen fertilizers produced from anhydrous ammonia, urea has been leading the fertilizer market in world agriculture since the 1960s, which can be attributed to the nonhazardous properties of an organic compound that can easily be applied to the soil or mixed with other fertilizers to prepare NPK formulations. The main limitation of urea is ammonia volatilization, which can lead to serious nitrogen losses when urea is applied to coarse textured soils or allowed to dissolve on the soil surface (e.g., Bremner 1995; Nunes et al. 2020). An alternative nitrogen fertilizer is ammonium nitrate, which is synthesized from the reaction of nitric acid with anhydrous ammonia (Figure 1B). Although different studies have shown the potential of this nitrogen source for plant growth, ammonium nitrate is more expensive than other nitrogen fertilizers and can be extremely dangerous as it can explode when in contact with high temperatures (Laboureur et al. 2016).

A safer option arises from the mixture of ammonium nitrate, urea, and water forming the UAN solutions (Figure 1B). These fluid fertilizers have been gaining increasing attention in fertilizer markets because they are safe to handle, convenient to mix with other nutrients and chemicals, and easily applied. The additional chemical processes required to produce UAN solutions make them more expensive per unit of nitrogen than other nitrogen fertilizers such as anhydrous ammonia and urea. Many other nitrogen fertilizers can be prepared from anhydrous ammonia, and some of them, like calcium nitrate and ammonium sulfate have received more attention in other regions like Europe and Latin America, however, their low nitrogen content is a disadvantage, reflecting a higher logistic cost of these fertilizers. It is also relevant mentioning that some phosphate fertilizers such as mono and diammonium phosphate (MAP and DAP) can indirectly supply nitrogen for crop production, although these fertilizers are mainly used to provide phosphorus.

Nitrogen Fertilizer Manufacturers in the U.S.

The U.S. is the world’s fourth-largest producer of nitrogen fertilizers (The Fertilizer Institute 2019). In 2019, ammonia was produced in the U.S. by 16 companies at 35 plants in 16 states (Apodaca 2020a). Unlike elements mined from the Earth, such as potassium and phosphorus, where the mine location is determined by the presence of rocks containing significant amounts of these elements, ammonia is produced from the atmosphere so theoretically production facilities could be located anywhere. Most ammonia production in the U.S. occurs near large reserves of natural gas in Louisiana, Oklahoma, and Texas due to the use of natural gas as a hydrogen feedstock, and to fuel the high temperature and pressure needed to produce ammonia (Apodaca 2020a). Most ammonia in the U.S. is produced by international companies and used for domestic consumption, with some imports from production facilities located in Trinidad and Tobago and Canada. A small amount of ammonia produced in the U.S. is exported. Although U.S. imports and exports of ammonia appear small compared to domestic production and consumption, the numbers are significant when compared with other ammonia importing and exporting countries. In 2019, the U.S. was the 9th largest exporter of ammonia and 2nd largest importer of ammonia in the word. The U.S. also imports urea, and in 2019 they were the 2nd largest importer of urea in the world (Nutrien 2020).  Figure 2 shows total production, imports, exports, and apparent consumption of ammonia from 2015 to 2019. 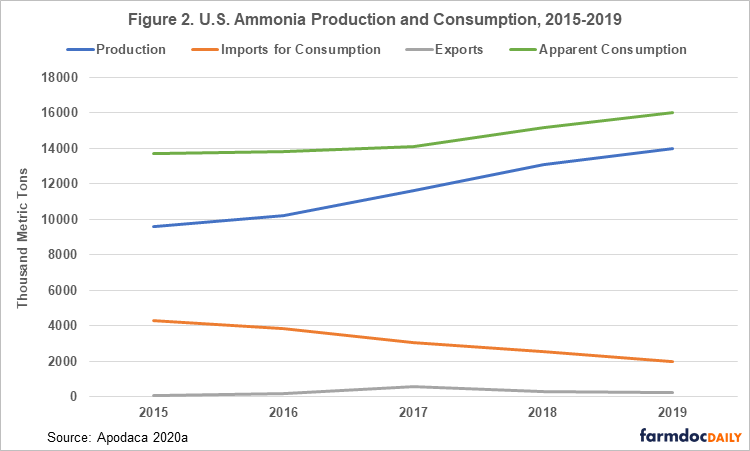 The largest ammonia producing companies in North America are CF Industries, Nutrien, Mosaic, and Yara (Nutrien 2020). Nitrogen fertilizer production facilities operate every day but have limited storage capacity, so fertilizer must be transported to warehouses and terminals for storage. Modes of transportation used to transport ammonia include refrigerated barge, rail car, pipeline, and tank truck (Apodaca 2020b). During the summer and winter, fertilizer producers fill the warehouses and terminals, and during the spring and fall, the storage facilities are emptied as farmers apply nitrogen to their fields.

Many people consume plants fertilized with nitrogen or animals fed nitrogen fertilized crops every day but are unaware of where the nitrogen comes from. The discovery of synthetic nitrogen fertilizer revolutionized food production for a growing population, and the history of the development of nitrogen fertilizer is relevant to those who use and study nitrogen. Most ammonia used in the U.S. is produced domestically near natural gas deposits by large international companies and transported throughout the country using a complex transportation network that is highly dependent on the seasonality and geography of fertilizer usage. At the production plants, companies use a high pressure and temperature reaction with a catalyst to produce ammonia. To manufacture urea or UAN from the ammonia, additional chemical processes are required, which is why UAN and urea cost more than anhydrous ammonia per unit of nitrogen.

The development of synthetic nitrogen fertilizer benefits the population through increased food production, but the use and manufacture of synthetic fertilizer have presented challenges. Significant nitrogen loss occurs through leaching, volatilization, and denitrification, causing concern for water quality, greenhouse gas emissions, and soil health among other concerns. Another concern is the energy intensiveness of the Haber-Bosch process, which utilizes significant resources to create a high pressure and temperature environment to make ammonia. Further refinement of ammonia into UAN or urea requires additional energy, in addition to the cost of transporting, handling, and storing nitrogen fertilizers. Although ammonia production is much more efficient than when originally commercialized, the production of ammonia for commercial agriculture still requires a large amount of energy and resources. At university recommended nitrogen application rates, nitrogen fertilizer application is the largest energy input into corn production (Sawyer et al. 2010). Nitrogen fertilizer use and production in the U.S. has changed drastically since its inception, and new technologies and efficiencies are continuously being developed to improve the production and application of fertilizers to sustain the global food production needed for a growing world population.