It is not unusual for revisions to USDA crop and livestock estimates to be newsworthy.  A good example occurred in January, when the USDA lowered its estimate of the U.S. average corn yield by 3.8 bushels to 172 bushels per acre.  While this was a large downward revision from a historical standpoint, it was not without precedent.  By comparison, revisions to USDA quarterly grain stock estimates have tended to attract far less attention and have little if any market impact.  However, this situation appears to have changed in the last couple of years, with several notable revisions to quarterly stock estimates for corn.  A previous farmdoc daily article (January 15, 2020) examined one of these revisions and the possibility that this signaled a major shift in USDA methods for revising corn balance sheets.  The purpose of this article is to examine USDA revisions of quarterly grain stock estimates for corn in more detail for the last two marketing years and analyze the size of these revisions compared to the historical distribution of revisions.

The USDA provides estimates of U.S. corn stocks at the end of each quarter of the marketing year.  The reference dates for those estimates are December 1, March 1, June 1, and September 1.  Estimates of on-farm grain stocks are based on data collected in the quarterly Agricultural Survey in which a sample of producers are asked to identify the storage capacity of all structures normally used to store whole grains or oilseeds and to estimate the total number of bushels of corn stored on the reference date on the total acres operated by the respondent regardless of ownership or intended use of the crops.  For the December report, estimates of unharvested production are also included in the stocks estimate.  Respondents are specifically asked to estimate the number of acres and expected yield for crops remaining to be harvested for the current crop year.  Respondents are also asked if unharvested production was included in the respondent’s estimate of stocks on hand.  For the September report, respondents are specifically asked to exclude any new crop inventories.  Stocks estimates are imputed for non-respondents.

The sample size for Agricultural Surveys is large in order to provide sufficient observations needed for statistical rigor when the range of potential responses is very large.  For the 2019/20 marketing year, the sample size was 79,000 in December, 79,900 in March, 70,900 in June, and 62,500 in September.  Of course, only a subset of the respondents store corn.

Estimates of off-farm stocks of corn are based on data collected from mills, elevators, warehouses, and other storage facilities.  Importantly, this survey is intended to be a census of all commercial facilities.  Respondents are asked to identify the number of storage locations operated and being reported, the rated storage capacity of all locations being reported, and to estimate the number of bushels of corn and soybeans stored at those facilities on the reference date.  For the September 1 report, respondents are also asked to separately estimate stocks harvested in previous crop years (old crop) and stocks harvested in the current crop year (new crop).

The survey procedures for the quarterly stocks estimates is expected to provide relatively accurate estimates even though the sampling variability for the on-farm stocks estimate is relatively large for some quarters.  The relative standard errors for on-farm corn stocks for the 2019/20 marketing year were reported as follows:

The USDA has a well-defined process for revising the quarterly grain stock estimates.  The procedure is described in the most recent December 1, 2020 report as follows:

“Revision Policy: On-farm and off-farm stocks are subject to revision the quarter following initial publication and again in the following December 1 Grain Stocks report published in January each year. Revisions can be made when late reports are received, errors are detected in reporting and calculations, and production estimates are revised. Estimates will also be reviewed following the 5-year Census of Agriculture. No revisions to these years will be made after that date.” 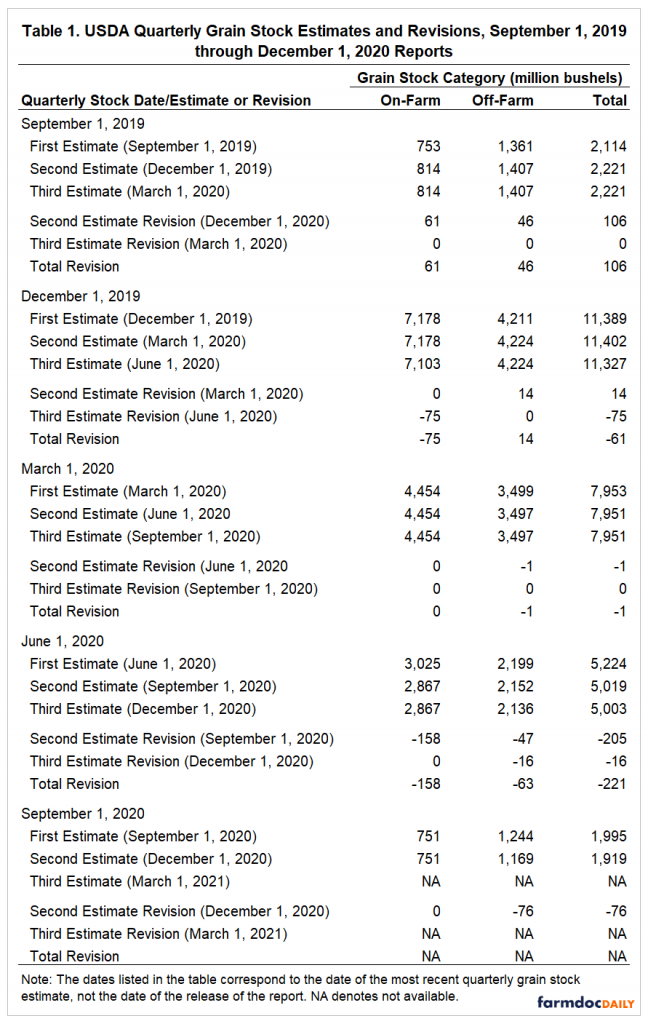 Several interesting patterns emerge in Table 1 for the five recent quarterly stock estimates in corn. Second estimate revisions occur for all five quarterly estimates and third estimate revisions occur for two of the five.  The schedule of revisions is consistent with the USDA revisions policy, except the third revision of the December 1, 2019 corn stock estimate.  This revision occurred in the June 1, 2020 report, which was neither the immediately following quarter or the December 1 report.  Both on-farm and off-farm stock estimates for corn were revised over this period.  It is especially interesting to observe that all five quarterly off-farm estimates were revised, with the June 1, 2020 estimate being revised twice.  Given that these are meant to be a census of off-farm facilities, it is especially puzzling that both positive and negative revisions were made over such a short period of time.  The policy reviewed in the previous section indicates these changes should reflect late reports or errors.  One presumes that late reports add to off-farm totals, which may explain positive revisions.  It is not clear what kind of errors would explain the negative revisions to off-farm stocks.  Finally, the basis for making two of the three revisions to the on-farm stock estimates (December 1, 2019 and June 1, 2020 reports) is not clear because no new production estimates were published on the revision dates.

The next step of the analysis is to analyze the size of revisions for the last five quarterly stock estimates compared to the historical distribution of revisions.  We do this by computing the revision between first estimate published in grain stock reports and final stock estimates as reported in the current vintage of the USDA QuickStats online database for December 1, 1990 through December 1, 2020.  Note that these revisions reflect not only the quarter-to-quarter revisions documented in Table 1, but also historical revisions associated with the five-year Agricultural Census.  We take the absolute value of revisions and then rank order the revisions in order to form a historical distribution.

Table 2 presents the distribution of revisions for quarterly corn stock estimates and compares these to the four largest revisions since September 1, 2019.  Historically, revisions to quarterly stock estimates for corn have been very small, with 84 percent of the revisions less than 5 million bushels in absolute value.  It is therefore not surprising that the average revision size over this period was only 4 million bushels.  Only 14 percent of revisions were between 11 and 20 million bushels in absolute value and just three revisions were between 21 and 51 million bushels.  It is from this perspective that the size of recent corn stock revisions really stands out.  There is nothing in the historical record that compares to the magnitude of recent revisions.  The individual revisions listed in Table 2 are by an extremely wide margin the largest four revisions over the last 30 years. 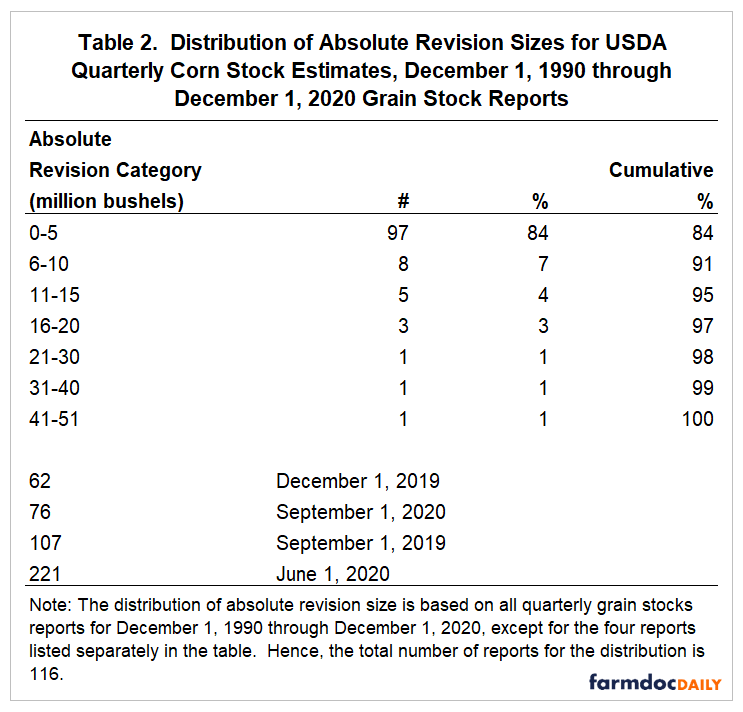 Further perspective on the shocking size of recent revisions can be gained by considering the largest revision in absolute terms, 221 million bushels, for the June 1, 2020 quarterly corn stock estimate.  This revision is more than 50 times the size of the average revision.  Even more incredibly, this revision is a “32 sigma event,” meaning that it is more than 30 standard deviations above the mean using the sample of quarterly grain stock reports from  December 1, 1990 through June 1, 2019.  From a historical standpoint, the four listed revisions meet any reasonable definition of an “outlier.”

USDA quarterly grain stock estimates for corn are an important benchmark for virtually all participants in the grain markets.  These estimates provide key readings on the pace of consumption during the marketing year and provide the official ending stocks for USDA balance sheets.  While the USDA has always had a process for revising the initial quarterly estimates in subsequent reports, these revisions for corn have historically been very small.  The average absolute revision of quarterly stock estimates for corn over the last 30 years has only been 4 million bushels and 95 percent of revisions have been 15 million bushels or less.  Something very dramatic changed with USDA revisions policy in the last two marketing years.  By an extremely wide margin, the largest four revisions for corn over the last 30 years occurred between September 1, 2019 and September 1, 2020. The largest of the recent revisions in absolute terms, 221 million bushels, is more than 50 times the size of the historical average revision.

The shocking size of quarterly grain stocks revisions for corn the last two marketing years is, quite frankly, out of character for the USDA, which in the past has tended to be very careful and conservative in making changes to statistical estimation procedures.  USDA crop estimates have developed a reputation as the “gold standard” for good reasons.  There are two possible explanations for the dramatic revisions of the last two marketing years.  Either the USDA made a major change in revisions procedures or some kind of significant problem has developed with the survey data or estimation process.  To date, the USDA has not provided a specific explanation for the very large revisions in quarterly corn stock estimates.  It is reasonable to expect the USDA to tell users what is going on. Without such an explanation, it is not clear how market participants can confidently anticipate and interpret quarterly corn stocks estimates going forward.