Livestock feed is a significant use of both corn and soybeans. Forty percent of the domestic corn crop and over 60% of domestic soybean production are used as livestock feed (April 2021 USDA WASDE). Animal agriculture is obviously important to the demand for corn and soybeans, with meat consumption being the major product of animal agriculture. Herein, we detail the per capita consumption of meats in the U.S. Focus on meat consumption is warranted given the recent climate, ethical, and health considerations facing the meat industry. The potential impacts of these evolving factors are difficult to quantify and will most certainly fluctuate in importance and influence. Still, examining past patterns can provide benchmarks and expectations for meat demand and livestock feed use over the next decade. 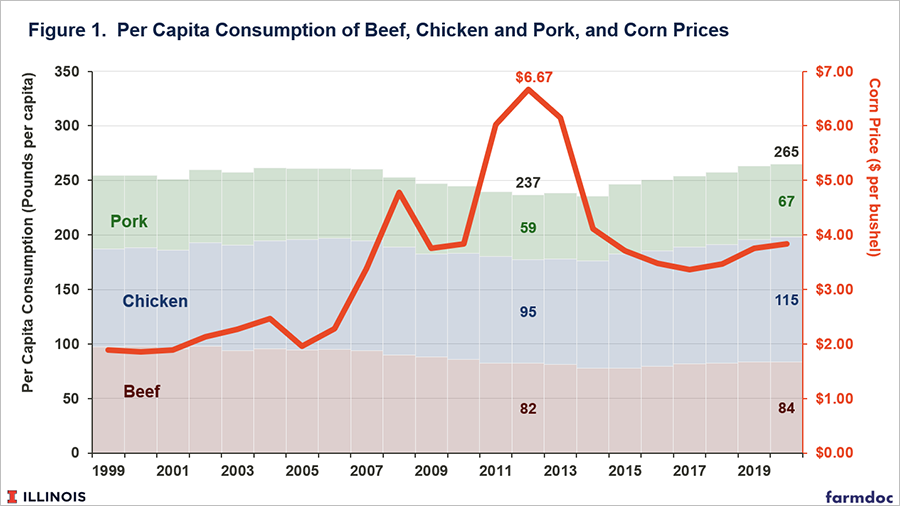 Second, there was the Great Recession of 2008, which caused lower disposable incomes. Reductions in incomes typically lead to lower meat consumption.

Shifts in per capita meat consumption will have noticeable impacts on feed use. Compared to a broiler feed conversion ratio of around 2-to-1, commercially produced beef cattle typically convert feed at a ratio of 6-to-1. Assuming that consumers will continue to replace beef with chicken in their diets, the amount of feed input used per pound of meat consumed will decrease.

Overall, U.S. consumption of meat is relatively stable, temporally influenced by the economics of feeding livestock and general economic conditions. Economic growth in the U.S. could increase meat consumption marginally, but large increases should not be expected. As a result, domestic meat consumption likely will not be a driver of increased corn and soybean consumption. If anything, feed demands for domestic consumption will likely decline with a continued switch to chicken consumption. Increases in livestock feeding efficiency will further reduce demand.

Yields of corn and soybeans likely will continue to increase in the future. Given that per capita consumption of meat will not grow, increased demand will have to count on exports and other uses. Exports of meats could be a growing use of corn and soybeans.