Data from the National Agricultural Statistics Service (NASS) and Illinois Farm Business Farm Management Association (FBFM) for 1972 through 2020 was used to look at the prices Illinois farms received for grain compared to total economic costs when adjusted for inflation.  Current grain prices we are seeing have not been this high since 2013.  However, when we adjust the prices received and the associated economic costs for inflation, are things as high as they seem?

Inflation Adjuster – To adjust prices and cost for inflation the index numbers for implicit price deflators for gross domestic product is used where 2012 equals 100.

Grain Prices – The average price received for corn and soybeans by Illinois farmers comes for the NASS prices received survey which for major grains and oilseeds, is a panel of about 2,000 mills, elevators, and buyers in the main grain producing states.  This survey is completed monthly asking the panel the total quantity purchased and total dollars received.  The yearly number is the marketing year value for that crop year.  Therefore, 2020 is not completed yet in this analysis but an estimate is used for the last three months based on the current World Agricultural Supply and Demand Estimates (WASDE) report. 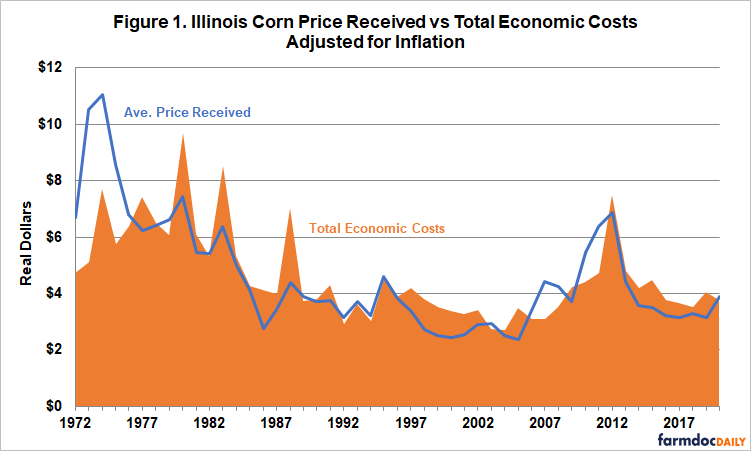 When analyzing prices and returns in real dollars (adjusting for inflation), the higher prices we have seen in 2021 and in the not too distance past when the Renewable Fuels Standard (RFS) was increased by the passing of the Energy Independence and Security Act of 2007 are not as high when comparing to the 1970’s.  When looking at total economic costs to produce corn and soybeans that have been adjusted for inflation, corn costs have had some peaks, but have been fairly level, especially since the mid 1980’s (outside of the high costs around 2012) while soybean economic costs have trended around $10.00 per bushel since the early 1980’s.  So current prices are not as high as they were in the 1970’s but total economic costs are lower than they were in the 1970’s as well in terms of real dollars.

The author would like to acknowledge that data used in this study comes from the Illinois Farm Business Farm Management (FBFM) Association. Without Illinois FBFM, information as comprehensive and accurate as this would not be available for educational purposes. FBFM, which consists of 5,000+ farmers and 68 professional field staff, is a not-for-profit organization available to all farm operators in Illinois. FBFM field staff provide on-farm counsel along with recordkeeping, farm financial management, business entity planning and income tax management. For more information, please contact our office located on the campus of the University of Illinois in Mumford Hall at 217-333-8346 or visit the FBFM website at www.fbfm.org.