The U.S. Department of Agriculture released 2021 state-level cash rents. The average cash rent in Illinois was $227 per acre, a $5 increase over 2020 levels. Over time, cash rents typically follow agricultural returns in a lagged manner. Higher returns in 2020, along with projected higher returns in 2021 and 2022, likely lead to upward pressures on 2022 cash rents. Increasing 2022 cash rents could lead to low and negative farmer returns if prices return to their average levels experienced in the late-2010s. High potential for variability in prices and returns suggests using an arrangement that varies payments based on economic conditions, such as a share rent or variable cash leases. An August 10th farmdoc daily article suggests variable cash lease parameters.

The 2021 Rent in Historical Context 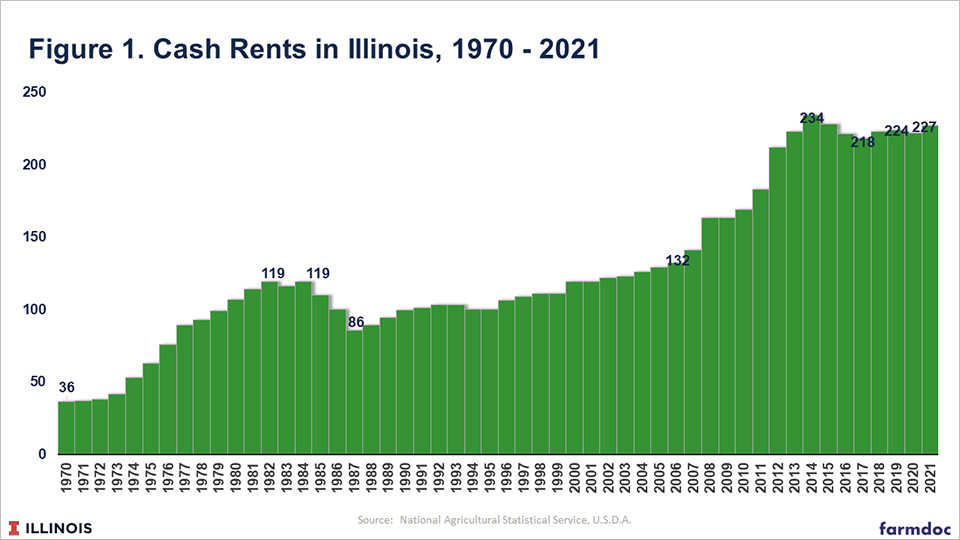 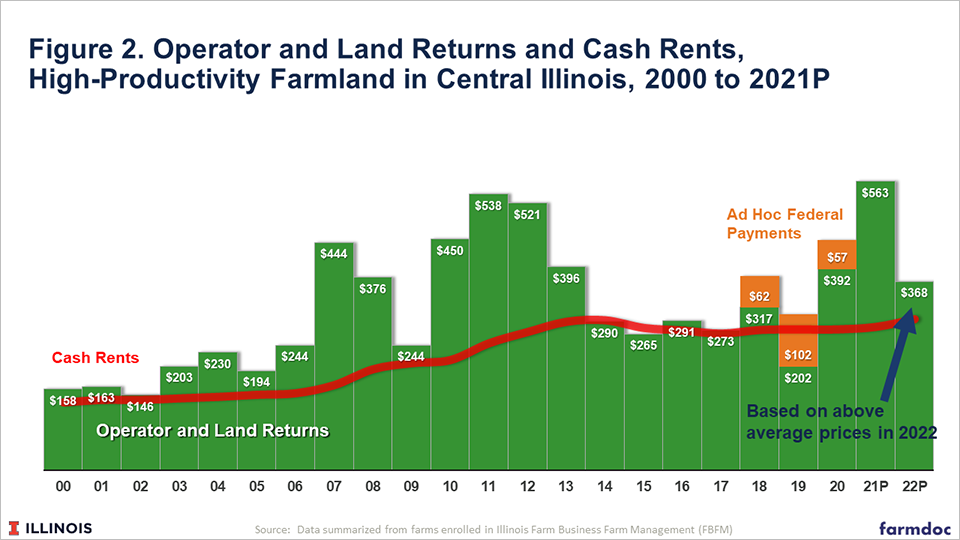 Recent return projections for 2022 indicate operator and land returns are at $328 per acre for a 50-50 corn-soybean rotation in Central Illinois on high productivity farmland, above average cash rents. Overall, the relatively higher return in 2020 and 2021, along with higher projected returns in 2022, could lead to upward pressures on cash rents.

The danger of setting cash rents at higher levels revolves around prices used in making 2022 projections. For 2022, projected prices are $4.50 per bushel for corn and $12.35 per bushel for soybeans, well above the average price levels from 2014 to 2019 of $3.66 per bushel for corn and $9.91 per bushel for soybeans. If prices remain at the higher projected levels, operator and land returns for a rotation will likely remain above the average cash rents even with some cash rent increases. In addition to potentially higher land costs, the expectation for record high non-land costs is putting pressure on 2022 returns. A return to the 2014-2019 average price levels would push operator and land returns below average cash rents, leading to negative returns for farmers (see farmdoc daily, August 10, 2021).

Overall, higher agricultural returns in recent years likely led to rising rents in 2021. As long as prices remain at or above the higher prices projected for 2022, positive returns to farmers are possible. However, a return to 2014-2019 price levels in the 2022 budgets would lead to negative farmer returns, particularly given the large non-land cost increases projected. These uncertainties suggest using a rental agreement with payments contingent on economic outcomes, such as a variable cash rent (see farmdoc daily, August 10, 2021) or a share rent arrangement.