Since 2017, disaster payments have been made available to crop producers through programs called Wildfires and Hurricanes Protection (WHIP) program, WHIP Plus (WHIP+) program, and Emergency Relief Program (ERP). Given the persistence of these disaster programs, there likely will be attempts to include a permanent disaster assistance program in the next farm bill. Herein, we lay out the basics of the WHIP+ and ERP programs, particularly as they relate to crops with crop insurance or Noninsured Disaster Assistance coverage. Then, we lay out potential issues with these programs which will be covered in future farmdoc daily articles.

Discussion surrounding ad hoc assistance for crop disasters is not new. Unpublished data from USDA indicates CCC outlays for disaster assistance exceeded $3.57 billion between 1975 and 1981 (Goodwin & Rejesus), to cover prevented planting losses and yield losses. This disaster assistance was one of the primary drivers for the Federal Crop Insurance Act of 1980, which created the current, modern Federal crop insurance program with the goal of replacing the need for disaster assistance (RMA).

Even given this crop insurance program, the 2008 farm bill authorized the Supplemental Revenue Assistance Program (SURE). SURE program payments were calculated as 60% of the deficit between a farm’s guaranteed crop revenue level and actual crop revenue (including farm program payments and insurance indemnities) using total crop revenue for the entire farm. The whole farm approach differed from the crop specific design of crop insurance and prior disaster assistance programs. The program, only authorized for five years, ended in 2012. It was not renewed by the 2014 farm bill. A key reason for nonrenewal was the complexity of its calculations. Further, use of the crop insurance program declined initially while SURE was in effect while the end of the program brought about a notable increase in insured acres over 2012 and 2013. The resurgence in crop insurance without the presence of a permanent disaster program is reflective of the initial goal of the federal crop insurance program.

In 2017, Congress responded to significant damage from hurricanes and wildfires with a new ad hoc disaster program, appropriating up to $2.36 billion to the 2017 Wildfires and Hurricanes Indemnity Program (2017 WHIP) as part of a bipartisan budget act. In June 2019, Congress passed a disaster aid package that provided more than $3 billion for The Wildfire and Hurricane Indemnity Program Plus (WHIP+), building upon the 2017 WHIP predecessor program. In December 2019, an additional $1.5 billion was provided to WHIP+ for the 2018 and 2019 crop years.

WHIP+ covered not only wildfires and hurricanes but other types of natural disasters including floods, tornados, typhoons, volcanic activity, snowstorms, drought, and excessive moisture.  In essence, WHIP+ covered many of the same losses as the crop insurance program. Importantly, WHIP+ included additional disaster assistance for farmers with Federal crop insurance or Noninsured Disaster Assistance (NAP) coverage. More detail is provided in the following sub-section.

A continuing resolution signed into law in September 2021 provided $10 billion for crop losses in 2020 and 2021. With a few modifications, The WHIP+ program has been rebranded as the new Emergency Relief Program (ERP) for the 2020 and 2021 crop years. Qualifying natural disasters were expanded to include derechos, excess heat, freeze including polar vortex, and smoke exposure. ERP continued additional assistance to farmers who have crop insurance and NAP.

ERP for Crops with Insurance or NAP coverage 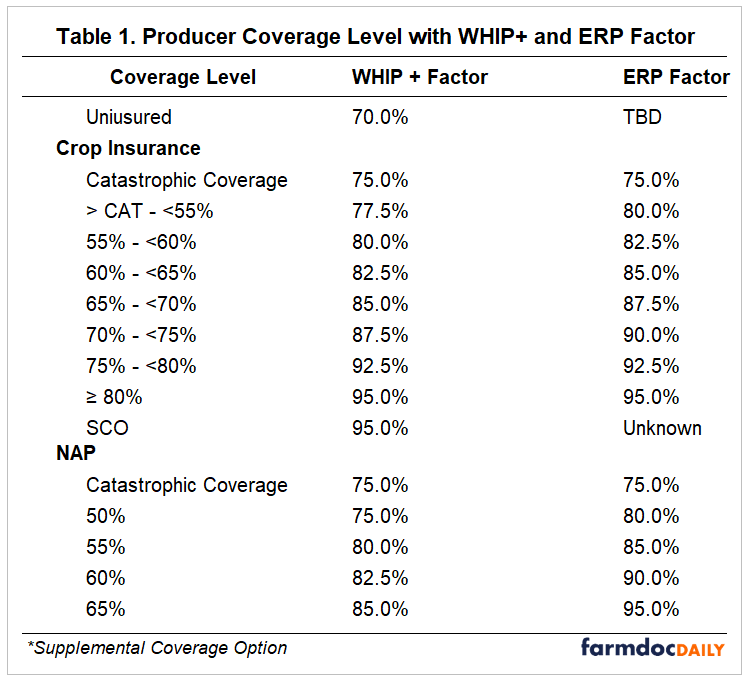 For individuals with crop insurance or NAP, ERP provides an increase in the coverage level and the ERP payment represents the difference. If CAT coverage level is selected, the ERP factor is 75%. The factor increases as the coverage level of the underlying policy increases, reaching 95% for and 80% or 85% policy coverage level. The WHIP+ factor was 70% for uninsured crops. Details on the corresponding ERP factor are not yet released but are expected when ERP Phase 2 information becomes available.

ERP is applied on a crop basis on a farm and not a whole farm approach, following the model of WHIP+. If a farm has multiple eligible crops, a disaster payment may be made on any one or more of the crops. The actual mechanics of determining ERP payments and notable changes from WHIP+ are illustrated in Table 2. The biggest two changes are: 1) expected value for ERP follows provisions of the underlying policy and 2) a net indemnity payment accounting for policy cost is used.

Eligibility for WHIP+ and ERP

Eligibility for WHIP+ was based on Presidential or Secretarial (US Secretary of Agriculture) disaster declaration by county. For Phase 1 of ERP, producers who received a crop insurance indemnity or NAP payment for 2020 and/or 2021 with a qualifying disaster cause of loss are eligible. The exception is losses due to drought which are only eligible for assistance if within a drought eligible county (see lists for 2020 and 2021). ERP Phase 2 will include producers with qualifying causes of loss who didn’t receive an indemnity payment, but USDA has not yet released factors for determining eligibility.

Both WHIP+ and ERP provide disaster assistance to insurance and uninsured producers. To be eligible for ERP Phase 1 producers must have purchased crop insurance or NAP coverage, but uninsured producers will be eligible for ERP Phase 2. All producers who received ERP payments must purchase crop insurance with at least 60% coverage level, or NAP with at least catastrophic coverage, in the next two available crop years.

The ERP program (and previously WHIP+) was created to assist crop producers suffering disaster related losses. While addressing a perceived need, the continued use of ad hoc disaster programs raises important issues to be considered, particularly related to crop insurance interactions. All of this leads to the question: what is good farm safety net policy in the presence of natural disasters? These topics will be presented in additional farmdoc articles over the next week.