Illinois crop budgets for 2023 have been revised from their initial release in August (farmdoc daily, August 2, 2022). Corn prices have been increased from $5.30 per bushel in August to $5.60. Soybean prices increase from $12.70 to $13.40. We also adjusted some costs. Overall, increases in projected prices raised estimates of 2023 profitability. However, costs are at all-time highs. As is always the case, incomes can vary from projections made at this time of the year.

Updated 2023 projections are contained in two publications in the Management section of farmdoc. First, the 2023 Crop Budgets give corn-after-corn, corn-after-soybeans, soybeans-after-corn, soybeans-after-soybeans, and wheat budgets for four regions: northern Illinois, central Illinois with high-productivity farmland, central Illinois with low-productivity farmland, and southern Illinois. A double-crop soybeans budget also is given for all regions except northern Illinois. The second publication — Revenue and Costs for Illinois Grain Crops — shows yearly returns and costs of producing corn, soybeans, wheat, and double-crop soybeans by region of Illinois. These budgets represent average returns regardless of the preceding crop and are summarized from farms enrolled in Illinois Farm Business Farm Management (FBFM). 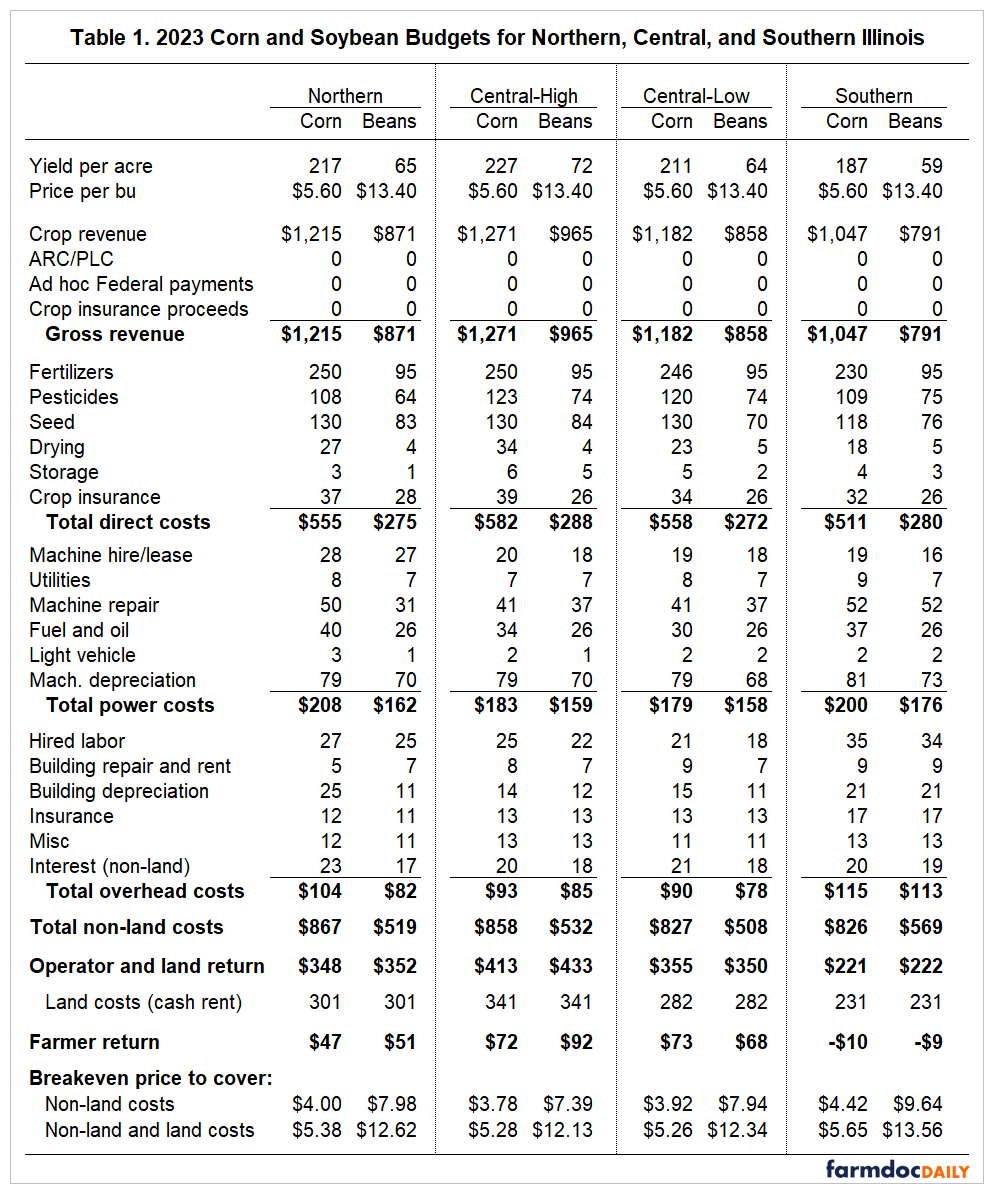 Projections are based on the following assumptions:

Return projections favor soybeans, but not by very large margins. In northern Illinois, projected farmer returns for corn are $47 per acre, $5 lower than the projected $51 per acre return for soybeans (see Table 1).

Farmer returns represent the amount remaining for the farmer after paying all financial costs, with a land charge at the average projected cash rent. In central Illinois, for high-productivity farmland, the 2023 farmer return is $72 per acre for corn and $92 per acre for soybeans. 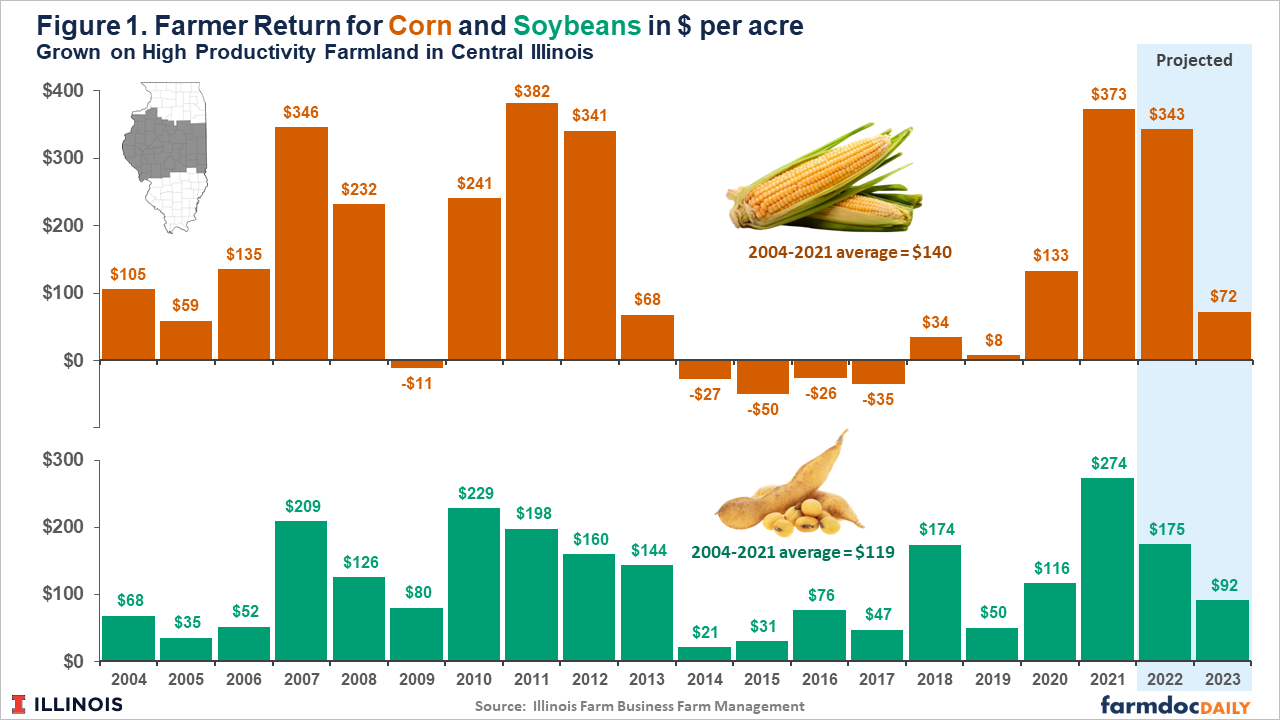 Recent incomes from 2020 to 2022 have been high, similar to those ten years ago, from 2010 to 2012 (see Figure 1). High prices persisted from 2010 to 2012 and then began to decline in 2013. Yields below trend occurred in some major world production regions from 2010 through 2012, with 2012 being a drought year in the Midwest. Yields were above trend in 2013, resulting in lower prices and lower returns. A similar phenomenon may be set up in 2023. If yields are above trend in both the US and Brazil, prices could fall, leading to lower returns. Of course, not much is known about yields in either hemisphere at this point, and poorer yields in either South or North America could continue into 2023, potentially leading to higher prices.

As has been noted (farmdoc daily, August 2, 2022), costs have continued to increase. Figure 2 illustrates cost increases for corn grown in northern Illinois. From 2021 to 2023 projections, total costs have increased from $900 per acre to $1,161 per acre, an increase of $261 per acre. 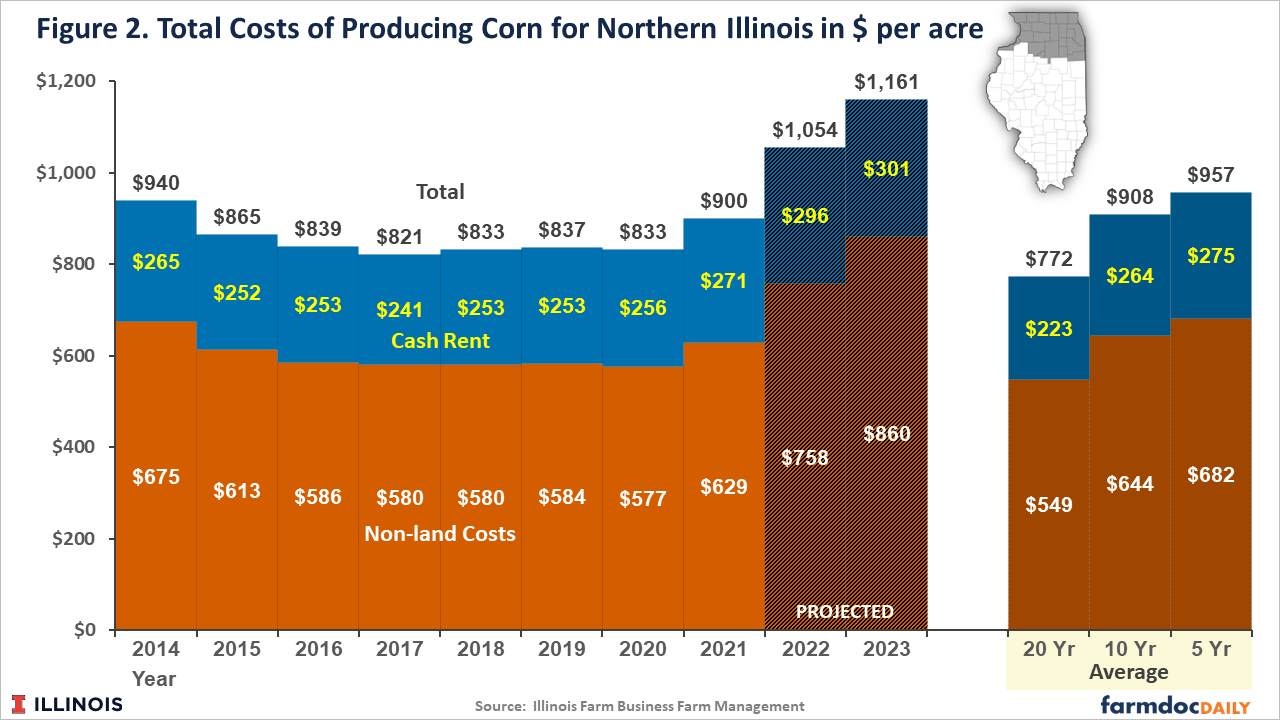 We have revised budgets, increasing the 2023 projected prices for corn and soybeans. The next revision will be by March. Overall, crop production is projected to be profitable in 2023, but the projection is for lower returns than in 2021 and 2022. Costs and breakeven prices are historically high, presenting risks to farmers.

Schnitkey, G. and K. Swanson. “Revenue and Costs for Illinois Grain Crops, Actual for 2015 through 2021, Projected 2022.” Department of Agricultural and Consumer Economics, University of Illinois at Urbana-Champaign, December 5, 2022.