Group Risk Income Plan with the harvest price option (GRIP-HR) will have higher premiums in 2011 as compared to 2010. Premiums were estimated for corn using a projected price of $6.00 and a volatility of .29. This price and volatility will not be final until the end of February. Hence, actual premium could vary from estimates shown in this paper. Over all counties in Illinois, GRIP-HR premiums will be about 75% higher in 2011 as compared to 2010. Even with these increased premiums, the estimated expected payments exceed farmer-paid premium in most counties of Illinois. 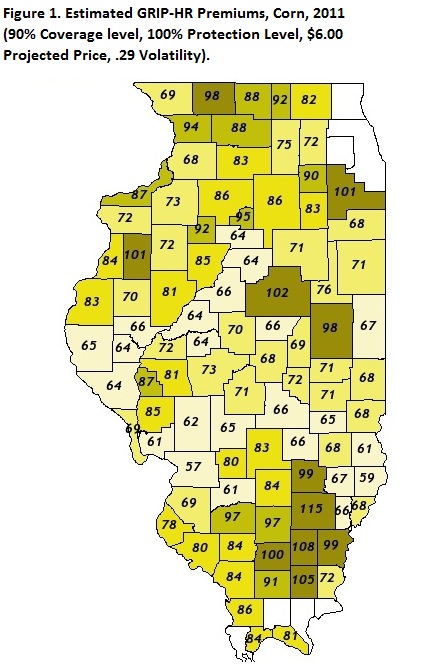 GRIP-HR for a 90% coverage level and a 100% protection level are shown in Figure 1. Lowering either the coverage or protection level will lower farmer-paid premiums. More detailed estimates of GRIP-HR premiums can be obtained from the 2011 Crop Insurance Decision Tool, a Microsoft Excel spreadsheet available for download from the farmdoc website.

In some cases adjacent counties have large differences in premiums. A good example is McLean and Champaign counties, located in central part of Illinois. Both McLean and Champaign counties are large corn producing counties. In 2009, McLean ranked 1st and Champaign ranked 5th in total corn production in Illinois. McLean County has an estimated 2011 premium of $102 per acre while Champaign County has a $98 per acre premium. These counties have significantly higher premium costs than adjacent counties. For example the three counties immediately south of McLean County have premiums of $70 per acre (Logan County), $66 per acre (DeWitt County), and $69 per acre (Piatt County). Difference in premium may influence crop insurance decisions. Farmers in Logan, Dewitt and Piatt counties which have lower premiums likely will find GRIP more attractive than farmers in Champaign and Logan Counties where premiums are higher. 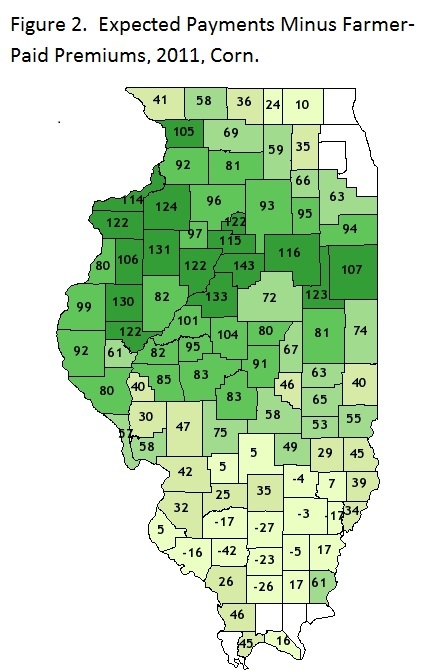 Positive expected payments do not mean that GRIP-HR will have positive returns every year. In over half the years, GRIP-HR will not make payments. Payments will be lumpy, with large payments happening in a few years. For example, if a major drought year like 1988 happened again, GRIP-HR would make large payments, exceeding $800 per acre in central Illinois counties.

Like all crop insurance products, GRIP-HR will cost more in 2011 as compared to 2010. While having higher premiums, the expected payments from GRIP-HR still exceed payments. Hence, some farmers may wish to consider GRIP-HR. GRIP-HR likely will be preferred by farmers who are more concerned with price risk than with yield risk. Because GRIP allows a 90% coverage level, GRIP offers better price protection than is offered by farm-level revenue products that have a highest coverage level of 85 percent. Moreover, expected yields used in GRIP do not lag production as Actual Production History (APH) yields for COMBO products. Hence, GRIP does not lower effective coverage like a typical COMBO.