In a 2008 report and a 2009 article we addressed the following basic question: Are higher crop prices here to stay? We argued that unfolding evidence suggested that corn, soybean, and wheat prices were indeed likely establishing a higher (nominal) average than previously experienced. Some disagree with this conclusion. We revisit the evidence here to see if the data continues to support our original conclusion.

Our basic evidence is found in the accompanying three figures depicting the average monthly farm price of corn, soybeans, and wheat in Illinois from January 1947 through February 2011. Our original data ended in July 2008, so we now have two-and-half additional years of monthly prices. We divide the data into three eras: 1) January 1947 through December 1972, 2) January 1973 through September 2006, and 3) January 2007-present. These periods are selected because each is thought to represent a structural shift in market conditions from the previous period, resulting in a higher level of nominal (unadjusted for inflation) prices. We then use a very simple procedure to project the average level and range of prices in the new and unfolding era–it is assumed that the percentage jump between the first and second eras will be similar to the percentage jump between the second and third eras.

As they say ‘the proof is in the pudding’ so let’s see how well our original projections for the average price level in this new era have held up. We projected an average price level of $4.60/bu. for corn, $10.58/bu. for soybeans, and $5.80/bu. for wheat. The averages for January 2007-February 2011 turned out to be $3.99/bu. for corn, $10.09/bu. for soybeans, and $5.36/bu. for wheat. Our projections were all a bit too high but certainly in the ballpark. We do not see any trends in the data that lead us to change our conclusion that a new and higher era of nominal crop prices is at hand. However, prices can still move to “low” levels in this new era, particularly in relation to production costs, and they can stay there for considerable periods of time. 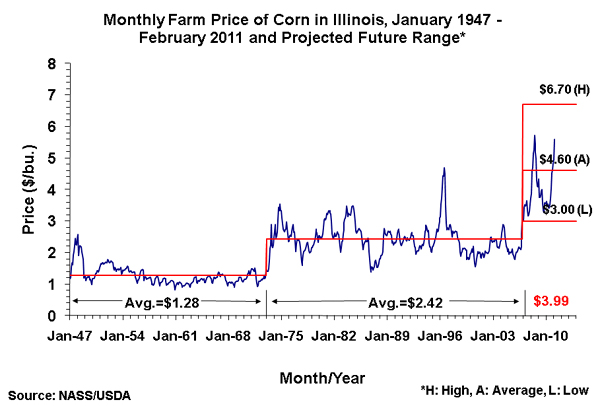 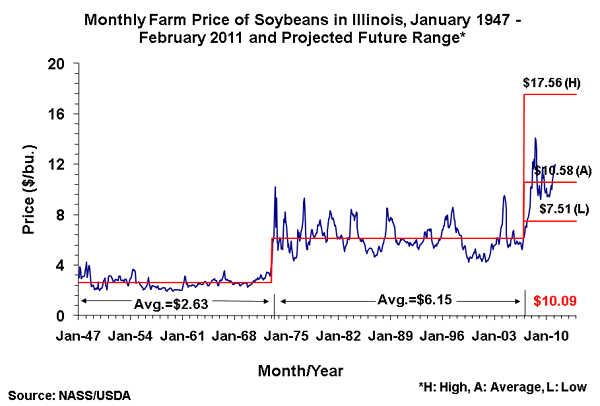 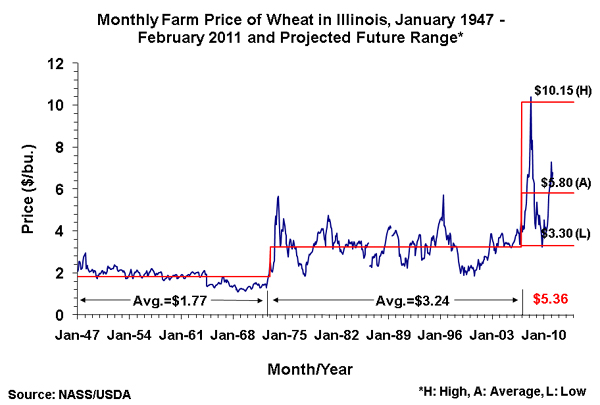