The Average Crop Revenue Election (ACRE) program was introduced in the 2008 Farm Bill beginning in the 2009 crop year. ACRE provides revenue-based support as an alternative to price-based counter-cyclical programs. By giving up 20% of their direct payments, and having their loan rates reduced by 30%, farmers can enroll their farms in the ACRE program and receive revenue protection based on a State-level, crop specific revenue guarantee.

Much of the analysis done by agricultural economists and researchers prior to the initial 2009 sign-up deadline indicated that the expected level of support from the ACRE program would exceed the level of foregone direct payments required for enrollment. This was particularly true for the main Corn Belt crops of corn, soybeans, and wheat. Furthermore, ACRE was generally touted for its risk management performance during periods of high commodity prices relative to the fixed support price levels used for countercyclical payments and the marketing loan program.

A number of factors have been cited for the initially low participation rates including program complexity, the need for landowners to agree to enrollment, the need for detailed historical farm yield records, the irrevocability of the decision through 2012, the timing of payments based on the marketing vs. the crop year, and the ability to delay the decision until a future crop year (Woolverton and Young, 2009). A few of these factors – program complexity and the ability to defer the enrollment decision – would indicate that enrollment numbers might increase over time as both operators and landowners become more familiar with the program.

The ACRE enrollment deadline for the 2011 crop year is coming up on June 1st. Assuming relatively normal yield levels, prices for corn and soybeans would have to drop significantly from their currently projected levels to trigger payments in 2011. In contrast, the likelihood of payments being triggered on wheat acres again in 2011 is higher due to a relatively high revenue guarantee being projected based on preliminary price and yield guarantees. Note that final price guarantees for the 2011 ACRE program will not be published until June 29th for wheat and September 29th for corn and soybeans. 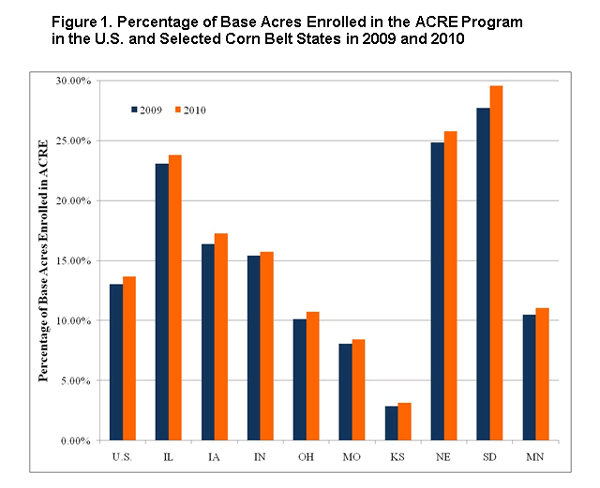