Recent discussions targeting agricultural programs for budget cuts always seem to center around the direct payment program. Direct payments (DP), along with crop insurance, were programs specifically mentioned in the FY 2012 budget passed by the House of Representatives on April 15. The budget resolution outlines cuts of $5.8 trillion in total government spending relative to the current budget baseline, and $30 billion in reductions in ag spending, over the next decade.

With the prices of many commodities and farm incomes at record levels, it is admittedly difficult to justify the need for a program that pays farmers regardless of economic conditions at an annual cost to taxpayers of approximately $5 billion per year. However, proponents of DPs will be quick to point out the important source of liquidity they provide producers, the ease with which the program’s cost is estimated for budgetary purposes, the limited exposure DPs present to federal expenditures (relative to price-based programs or crop insurance), and the non-distorting green box status they have with respect to the World Trade Organization (WTO).

Assuming cuts are made to the DP program, in what way would this effect an agricultural producer of program crops? The direct effect would be to lower the revenues earned from crop production, thus reducing farm profits. Figure 1 provides an illustration of the size of direct payments received by Illinois farmers. The level of support provided through the DP program varies geographically based on historical acreage allocations (i.e. the proportion of a farm’s acreage planted to program crops such as corn, soybeans, and wheat) and productivity (i.e. crop yields). Producers in the northern and central regions of the state receive $22-30 per acre due to higher yields and a relatively higher allocation of base acreage to corn. In contrast, producers in southern Illinois tend to receive less than $20 per base acre in DPs due to lower yields and more base acres allocated to wheat. In absolute terms, producers in northern and central Illinois have more to lose in terms of sources of crop revenues in the event that the DP program faces budget cuts. This would also be true for farms in other Corn Belt states. 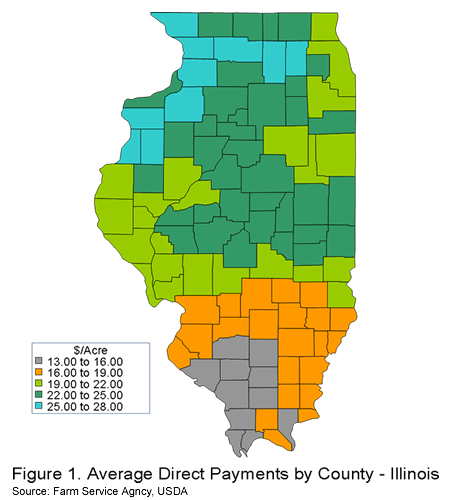 Eliminating DPs, and the resulting reduction in per acre profits, would also lead to other adjustments. Since DPs are tied directly to the land being operating by the producer, most agricultural economists turn to the market for farm land to analyze the potential impact of increases or reductions in government support. Standard economic theory would suggest that government payments – especially fixed payments like the DP program – fully accrue to the landowner through cash rent levels and capitalization into land values.

However, there is very little empirical evidence that government payments are fully passed through to landowners. Most studies find at least some level of sharing of government payments between tenant and landowner. Examples of such studies can be found here and here. Thus, any adjustments in cash rent levels would likely be smaller than those reported in absolute terms ($/acre) in Figure 1 or relative terms (%) in Figure 2. Moreover, there seems to be a considerable amount of skepticism in the agricultural community regarding the ability of cash rent levels to decline in response to reductions in profitability. 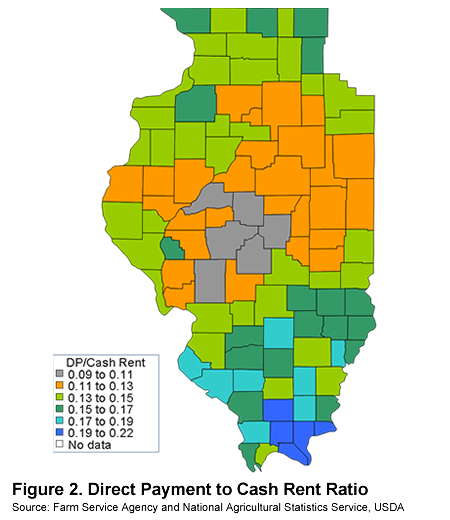