The recent and on-going widespread precipitation in the Corn Belt raises two related issues. One issue is the potential impact on the U.S. average corn yield if a substantial portion of the crop is planted “late”. The second is the speed at which the crop can be planted when weather conditions improve. As for the impact of late planting on corn yields, agronomic research clearly demonstrates that late planted corn generally yields less than corn planted in a timely fashion. For a brief, but informative discussion of this research see Nafziger 2008. While there continues to be mixed evidence about the optimum planting time for corn and the magnitude and pattern of yield decline as planting gets later and later (Nafziger 2011) there is clear evidence that the rate of yield decline increases as planting delays increase. Current market commentary centers on May 15 as dividing timely from late planting.

It is also important to emphasize that “high” yields can occur with late planting if subsequent growing conditions are favorable, but yields still tend to be below potential yield when planted late. Similarly, low yields can occur for corn planted in a timely fashion if subsequent growing conditions are unfavorable (Nielsen 2011).

When planting is delayed, the speed at which the crop can be planted is an important determinant of the portion of the crop that is planted late and the degree of lateness. Conventional wisdom is that the corn crop can be, and generally is, planted much more quickly in the current era of large farms and large equipment. There is no doubt that one operator today can plant more acres per hour than a single operator of 50 or even 10 years ago. This picture of a 48-row planter illustrates the point quite dramatically: 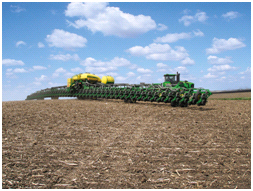 Figures 1 through 3, drawn from weekly Crop Progress reports from the USDA, provide a useful long-term perspective on this issue. These plots (updated from Irwin, Good, and Tannura 2008) show the percentage of the corn crops in Illinois, Indiana, and, Iowa planted during the week of the greatest planting progress each year from 1960 through 2010. Contrary to conventional wisdom, there is no trend toward planting a larger percentage of the crop in the peak week of planting since 1960. The largest weekly planting progress was reached in 1963 (60 percent) in Illinois, 1963 in Indiana (55 percent), and 1992 in Iowa (64 percent). The evidence suggests that the crop is not planted more quickly with larger, but fewer planters than was accomplished with smaller, but more numerous planters in the past. These results are consistent with those of Kucharik (2006), who reported that the average number of days from 10% to 75% corn planting progress tended to increase slightly over 1979 to 2005 in 12 Corn Belt states. Weather is likely still the largest determinant of overall planting progress rather than equipment size.

While we may not plant the corn crop in aggregate any faster today than in the past, clearly a large portion of the corn crop can be planted in a relatively short period of time. Figures 1-3 show that, on average, the percent of the crop planted in the week of peak planting progress was 35.7 percent in Illinois, 33.6 percent in Indiana, and 42.1 percent in Iowa. Progress in the peak week often exceeded 45 percent in Illinois and Indiana and 50 percent in Iowa. These data suggest that the majority of the 2011 corn crop can still be planted in a timely fashion (by mid-May) if weather conditions improve fairly soon. The intermediate term weather forecast provides mixed prospects for such an improvement. It appears that planting delays will continue and may become more pronounced particularly in the southern and eastern parts of the Corn Belt. 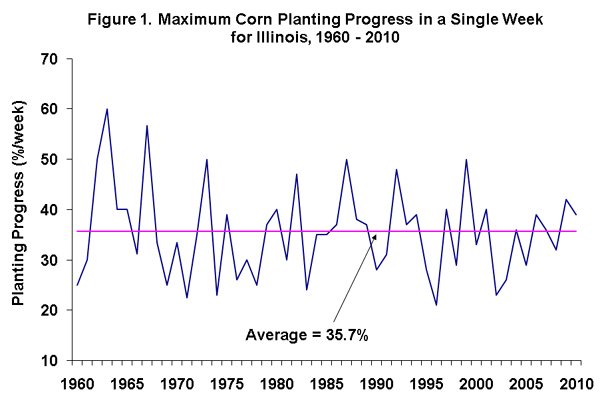 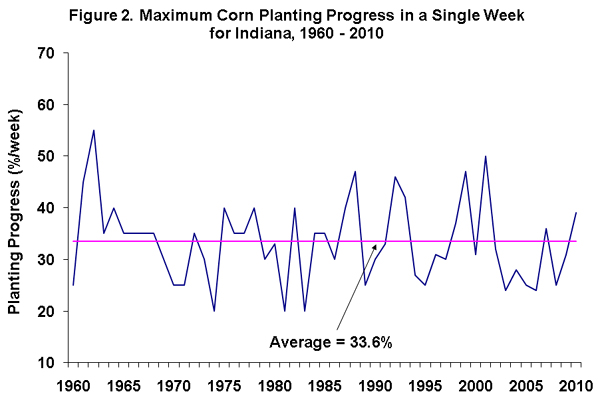 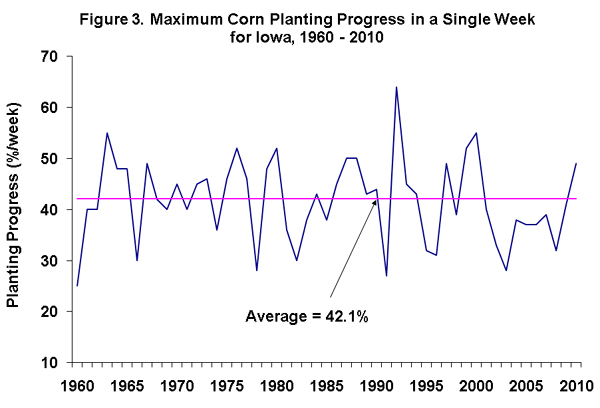