The crop farming sector has been relatively profitability in the past several years while the general economy has gone through a great deal of turmoil. As financial difficulties became apparent in 2008, most publicaly-traded companies saw their stock prices decline. In this article, we examine how the stock prices of publicly-traded companies dealing with agriculture performed since 2007. Did agricultural companies experience declines similar to most other companies? Or did their stock prices perform better as a result of profitability within the crp farming sector?

Twenty-one publicly-traded companies were identified as having business segments that provided or used products from crop farms (see Table 1). These companies were divided into five sectors: 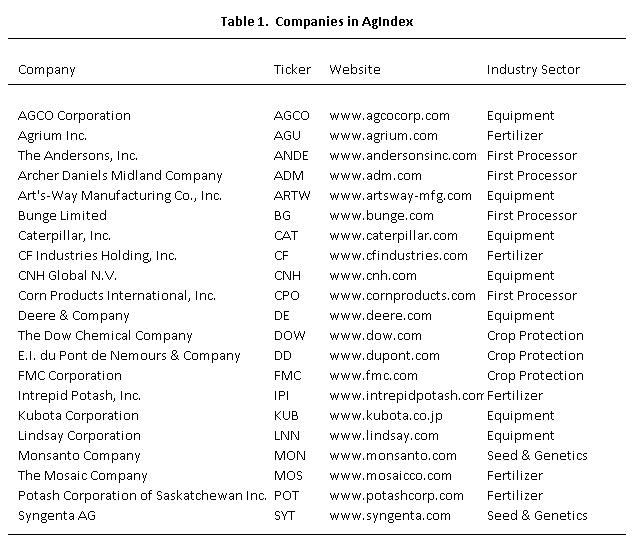 Two notes about these companies and their classifications. First, companies range in specialization. Some companies, such as Monsanto, have a total focus on agriculture. Other companies, such as Dow Chemical Company, have many business interests outside of agriculture. Hence, the performance reflected by the AgIndex will be impacted by business segments outside of agriculture. Second, the classification into sectors is not straightforward as some companies have products that span sectors. For example, DuPont produces both crop protection products and seeds through its subsidiary Pioneer. Similarly, Bunge Limited has grain processing interests as well as fertilizer interests. 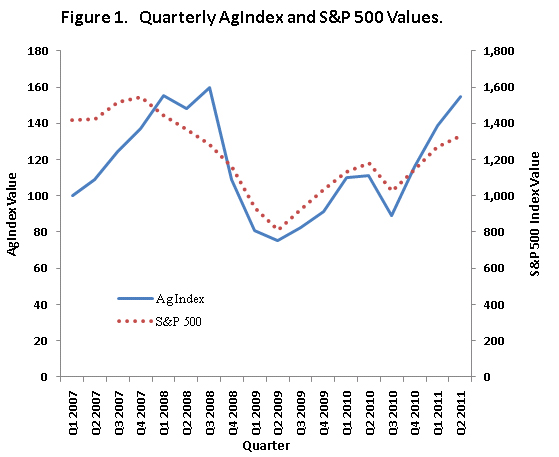 AgIndex Compared to the S&P 500 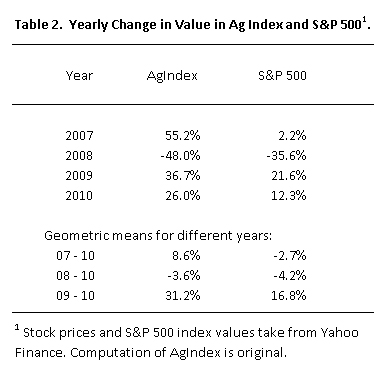 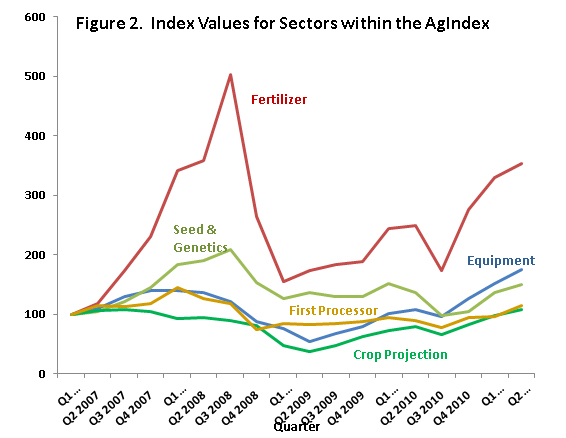 Sector Performance within the AgIndex

Market value changes of sectors within the AgIndex vary considerably (see Figure 2). The sector with the highest increase from 2007 through 2010 was the fertilizer sector, more than doubling market values. Fertilizer demand increases and merger activities likely led to higher market value of firms within the fertilizer sector. The equipment sector has the second highest increase with a 51 percent increase followed by seed and genetics with a 37 percent increase. Strong sales of equipment and seed existed over the past several years, partially due to higher farm incomes and increasing acreages in row crop production.

As a group, the market values of publicly traded firms within the AgIndex exceeded those of S&P 500 in the last five years. Since 2008, market value changes have been larger for AgIndex than for the S&P 500. Like crop farms, many agricultural firms have performed well in the period of higher commodity prices.

Market values varied across sectors. Fertilizer, equipment, and seed & genetic sectors had large increases in market values. These firms supply products to farmers, who have generally had above-average incomes. Farm’s having above average incomes likely led to higher demand for fertilizer, equipment, and seed & genetic sectors. The sector that had the lowest market value increase from 2007 was the first processor sector. This sector purchases inputs from grain farms and higher commodity prices may have played a role in lower market values.